A party of 3 males left the Lake Louise ski area, following a group of 7. They left the area partway down from the Whitehorn summit. They "didn't know they were leaving the boundary." They skied/boarded far skiers left, then found they were no longer following tracks, and thought "this isn't right". One of the members was having problems with his binding as well so they decided to cut back left to get back to the ski area and bumped into an area known as “Maintenance cliffs”.

Two of the party skied/boarded around the cliffs, cutting across the lower part of the slope that slid. One of the party of three directed the last member to board straight down, as he was having trouble getting further down the ridge. The boarder went down 5 m when the slope below him avalanched and then it cracked up behind him and took him with the debris. He was fully buried with his head beneath the snow. There was a foot of snow over his head, but fortunately only a few inches in front of his face. He was buried in the sitting position facing downslope. His hands were near the surface so he was able to punch them out of the snow and had an air pocket by his face the whole time. He was unable to dig himself out.

No one was carrying any avalanche safety equipment. 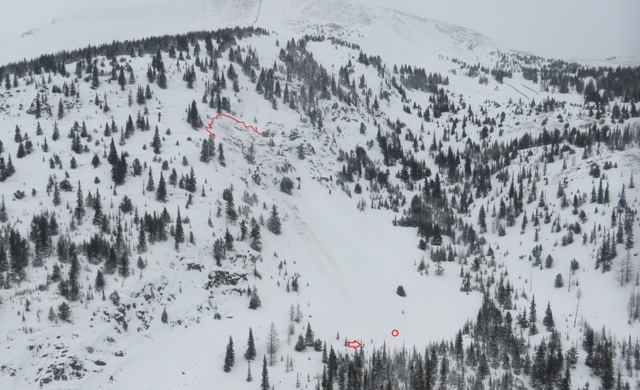 The scene of the avalanche. The circle shows the burial site, and the arrow points to where the party of three was rescued from.

The two males who weren’t involved in the avalanche called for a rescue at 1230 pm. A Visitor Safety (VS) Specialist from Banff talked to the reporting person and directed them to search for their friend and to look for anything - a hand, a piece of snowboard and to call out to him. They started to search while VS organized Parks staff, Lake Louise Ski Patrol, a helicopter and a dog team to respond.

By 1245 hrs the two males had found their friend. He was uninjured and they were still digging him out. The party was declining rescue and it took them about 20 minutes to dig him out using their skis. Many other skiers skied by them as they were digging. Once they were all on the surface, they realized that they didn’t know the way back to the ski hill and decided to accept a rescue so as to avoid getting lost or triggering anything else.

Two VS Specialists slung in underneath a helicopter and retrieved the party of three from the avalanche site. 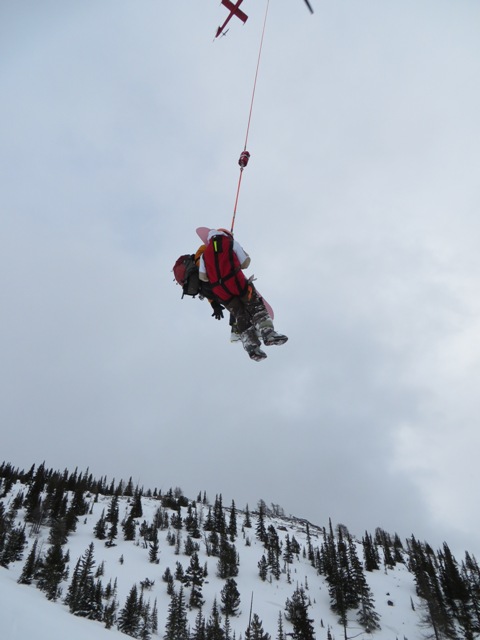 The lucky snowboarder getting slung off the site along with a VS Specialist.

Although the ski area boundary is well signed, it is still important to take responsibility for your own safety and be aware of where you are skiing. Inside the area boundary is controlled terrain and is safe for people to ski/board without avalanche knowledge or gear. Outside the boundary is a different matter. No avalanche control takes place outside the boundary and if you leave the ski area boundary, you need to be aware of avalanches and the other mountain hazards that exist there. Additionally, you need to carry the appropriate safety gear and know how to use it.

This was a very close call and the buried snowboarder is lucky to be alive. We can’t stress enough: If you are going into the backcountry you need to have avalanche training, know the current conditions and have the appropriate avalanche safety gear (beacon, shovel, probe).