A large group of friends and acquaintances were climbing and hiking in the Lake O’hara area. Two of the group started out to climb the SE ridge of Victoria on the morning of August 7, 2013. They had a very short section of rope with them, but were not travelling roped together. Approximately 300 m above the hut, just below the first big flat on the ridge, one of the climbers fell while climbing through a loose black shale band. He was a few metres in front and slightly to the side of the second climber, and he tumbled down past the second climber and down onto the lower slopes just above the hut. The second climber is not sure if he slipped or had some other medical related difficulty. 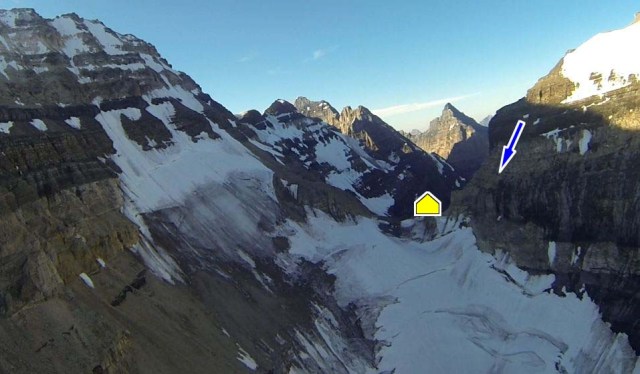 Abbots Pass – the scene of the accident. The blue arrow shows where the fall occurred and the yellow hut symbol shows the location of the Abbott’s Pass hut.

The uninjured climber began yelling for help and descending to the fallen climber. Two other members of the group who were attempting Lefroy, heard the calls and began to come down to assist. A person at the hut had a cell phone and called dispatch for help. Visitor Safety Specialists responded to the Banff Warden Office to ready gear and wait for the Alpine rescue helicopter. By the time the rescue gear was loaded, the uninjured climber and others from the hut had reached the fallen climber and determined that he had suffered fatal injuries in the fall. Staging for the sling rescue was done from the Abbott's Pass heli-pad and the uninjured climber was slung down from the site to the hut. The victim was transported by heli-sling to RCMP and Visitor Safety who had staged at Temple Lodge on the Lake Louise Ski Hill in order to be above the valley fog. Two of the group were flown to Lake Louise for statements and later driven back to O’Hara to reunite with the rest of their group.

The deceased was an experienced mountaineer who was 72 years old. 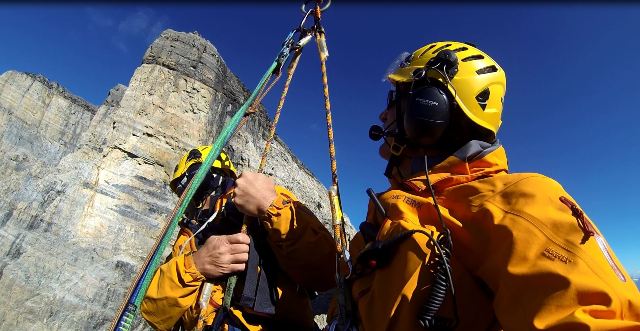 VS Specialists sling onto the accident site on Mt. Victoria

Analysis
The ground on the lower SE ridge of Victoria is mostly 4th class and can be negotiated without belays or roping up. Most guides would use the advanced technique of short-roping to protect the second from a slip on this terrain. However, in this case, the leader fell, and it is quite likely that he may have pulled the second off with him had they been roped together. The consequences of a slip in steep terrain, even if it is moderate, can be fatal.

In the early morning of August 9th, 2013 two climbers left the Cavell parking lot at 3:30am for an attempt on the East Ridge of Mount Edith Cavell (3363m Grade III 5.3). They initially by-passed the easier rock terrain to climb a snow gully at the start of the route which added time to their ascent. Once into the more technical rock terrain they began to pitch out the ridge and found that the progress was very slow. By 14:00 they reached their high point which was above the big shoulder and level to a thin snow band that transects the face at 2,900m. It began to rain lightly and the rock above looked committing, wet and slippery. They decided that in their current condition it was considered too risky to continue up or get back down. At 14:15, with a thunder storm building they called 911 on their cell phone and spoke with the Jasper Dispatch. They were transferred to Visitor Safety with Jasper National Park and a Bell 407 rescue helicopter and pilot from Golden was brought in to assist. As the weather continued to worsen with afternoon build up around the peak, the subjects are quickly located at approximately 2,900m on a good ledge. At 16:30, two visitor safety technicians where slung to their location and both subjects were taken off the ridge in two flights to a staging area at the bottom of the route and the rescue party and subjects were flown to valley bottom.

The east ridge of Edith Cavell is a long sustained rock ridge and requires good time management and strong skills in order to complete the route in a reasonable time and that includes the descent down the west ridge which is also a very long hike out. A typical day on the ridge is usually 12-14 hours round trip. These climbers made decisions on the route that cost them valuable time and energy on a day that required a quick ascent to be off the technical terrain due to the weather forecast characteristic for this time of year (thundershowers building in the afternoon). The climbers were not accustom to techniques for moving swiftly and safely over this type of terrain and found that the route was beyond their skill set, comfort, risk tolerance and fitness level in its present condition. They were well prepared with all the required safety gear to manage the route and potential bivi but found it difficult to move swiftly over the terrain. It’s important to keep the forecast and changing weather conditions in mind when choosing your objectives, especially a long and exposed ridge like this. Make sure you have an appropriate plan in mind and the skills and mental fortitude required to safely retreat from any route when the weather and desire deteriorate. 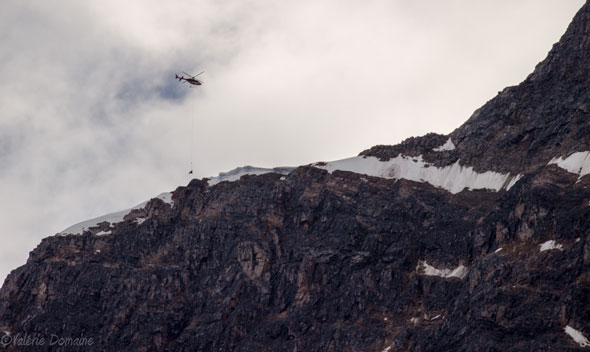 In the afternoon of August 15th visitor safety in Jasper National Park received a call about an overdue solo climber on the NW Ridge Mt Redoubt (3120m grade III 5.6) in the remote area of the Tonquin Valley in Jasper National Park. Initial investigation found that the subject had missed his regular scheduled check in time using a sat phone the night before. Visitor Safety technicians found his vehicle at the trailhead and used containment methods to ensure he didn’t come out from the valley at other access points. A hasty search was conducted using ground teams; checking back-country camp grounds, and the huts. A Bell 407 rescue helicopter was used to perform an aerial search of the mountain routes and surrounding peaks in the immediate vicinity. The subject was not found that evening. The next day, weather hindered a search of the summit block but ground teams conducted extensive searches of the surrounding areas and the lower access to the route. As the weather improved, the air team was able to locate the subject 500m below the summit on a small patch of snow in a gully on the west face. It appeared as if he was rappelling but it is not clear what caused him to fall. The steep walls prevented the helicopter from safely deploying the recovery team right at the site so three Visitor Safety Technicians were slung to a buttress near the subject and climbed the broken ledges to access a site above the subject. They built an anchor and a technician was lowered onto the steep snow patch to package the subject. He was secured to the anchor and his own ropes, which had stopped him from falling further by getting hung up on a block, were cut away. The subject was then slung off the face and transported to a staging area.

While it is easy to immediately dismiss this incident as a soloist taking bold and unnecessary risks in the mountains, this climber was a very experienced and calculated climber. He understood the risk he was taking and had the skills and fitness and a solid and reliable check-in schedule with his family. By all accounts, the route was well within his skill set and he had the means to retreat from the route. It appears that this was a rappelling accident, but it is not clear if he had slung a block with his rope and it failed or if there was a failure of equipment at his anchor or if the weather played an issue (afternoon thunderstorms and high winds). For all climbers, it’s important that we understand the risks we take climbing. Our own skills, experience and route selection are important aspects and we must try and mitigate the risks by making the safest choices. Test your handholds, double check your anchors, provide as much detail on the route choice as you can to your emergency contact (or voluntarily register with the mountain parks service) and make sure you have the right equipment to tackle any situation you might encounter. 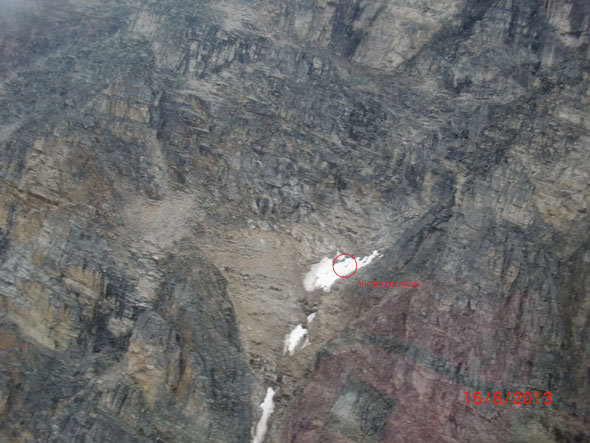 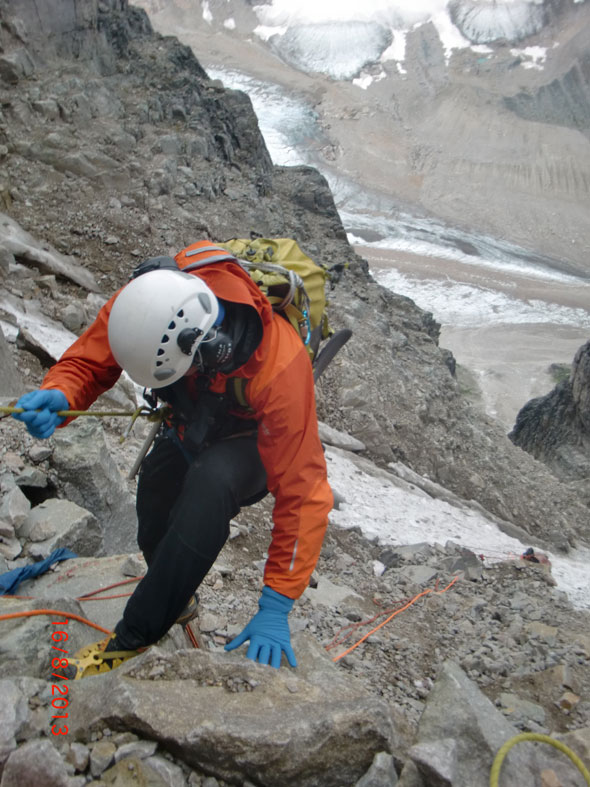 On Tuesday August 20, A hiker set out for a weekend hike away from his job at the Columbia Icefields. He wanted to stay in an Alpine club hut near Lake O'hara. He caught the bus up to O'hara and went to the Elizabeth Parker hut where the custodian/group informed him that the hut was full and that he did not have a reservation. He then decided he would go up to Abbott's Pass. It is unknown what directions or maps he had, but he turned left at Lake Oesa and began to scramble up the SW slopes of Mt. Victoria. He was over 2900 meters elevation when he decided he could go no higher. He tried to traverse off on a ledge, but the ledge pinched out. He then tried to down-climb, but he slipped and fell, luckily landing on a ledge with only bruises and scrapes. He then decided to camp and wait for help. He spent two nights on the ledge and on the third day managed to attract the attention of a group from the Alpine Club of Canada (ACC) who were descending from Abbott's Pass. 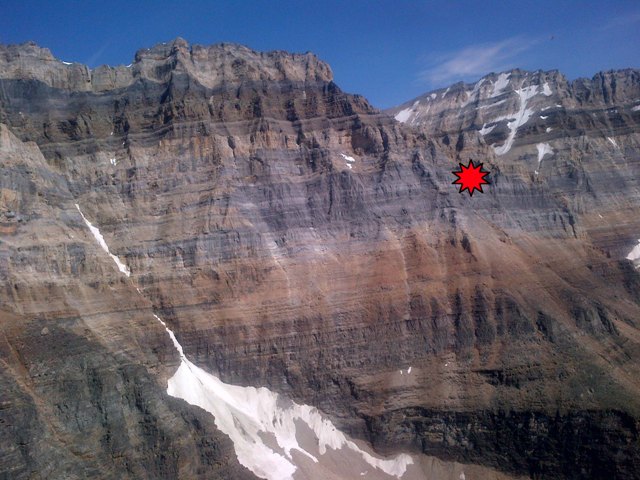 The red star marks the spot where the scrambler was rescued.

The ACC group used a telephoto lens and could see the hiker waving his red jacket and flashing his light. They had FRS band radios and called the Elizabeth Parker hut to sound the alarm. One of the ACC group members ran down to the lodge and called the report in. He had an FM radio and switched to the Parks channel to guide the rescuers in. The stranded hiker was located and heli-slung off his perch and given a ride back to his car. 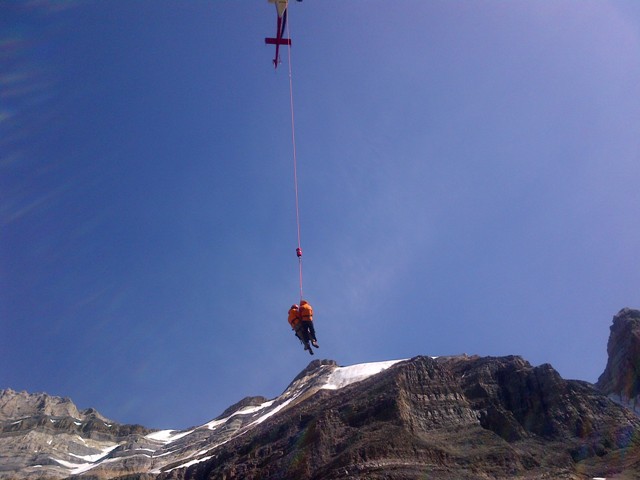 VS Specialists sling the scrambler to safety.

Analysis
Thanks to the ACC for good reporting. The hiker had not left word where he was going and it would have been some time before he was located where he was. A route description and some prior planning would have prevented this.