At 1700hrs a 911 call was received from a visitor at the Icefields Centre in Jasper National Park reporting a 63 year old female has broken her leg on the summer trail 400m below the summit of Parkers Ridge. While hiking with a group of friends she slipped on some rocks, her leg gave out and she heard a snap in her lower left leg. The visitor safety team from Jasper responded with a Bell 407 helicopter from Golden and flew over the accident site but due to the number of by-standers had to land the helicopter above the site and a Visitor Safety Specialist hiked down to the patient with first-aid and rescue equipment. Once the patient was stabilized, another Specialist was slung in and together loaded the patient in a ‘screamer seat’ (a sling modified sit-harness used to easily load a patient into for evacuation) and slung her to a waiting ambulance and she was transported to the hospital in Jasper.

The hiking party did just about everything right in this situation. They made the patient comfortable and roughly stabilized her leg and hiked down and got to the nearest phone at the Icefields centre to make the emergency call. No one in the party had a basic first-aid course or was carrying a first-aid kit with a splint which might have helped her comfort level. It was a warm overcast day when they left the trailhead but the patient was very cold when the Visitor safety team arrived because the party didn’t bring any extra warm clothes with them. When headed into the remote areas off the Icefields parkway it’s important to remember that any injury, however small can turn into something more substantial given the lack of communication, changing weather conditions and time to response. If you’re planning on hiking, climbing or skiing in the Parks consider taking a basic first-aid or better yet, a wilderness first-aid course and carry a well equipped first-aid kit for dealing with any injuries which might happen.

On July 21, 2013 a party of three was climbing Gooseberry on Tunnel Mountain, a seven pitch 5.7. The lead climber was on pitch three when he dislodged a loose handhold. He fell approximately 10m and landed on his back sustaining injuries. One partner climbed up to the fallen climber while the second placed an emergency call to Banff Dispatch. The partner that climbed up to the injured climber was able to facilitate the lowering of the injured climber to a sloping ledge where they waited for rescue. 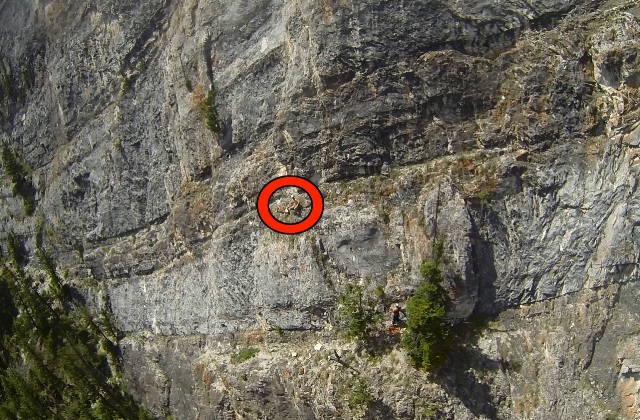 The accident scene. The red circle shows the location of the injured climber. 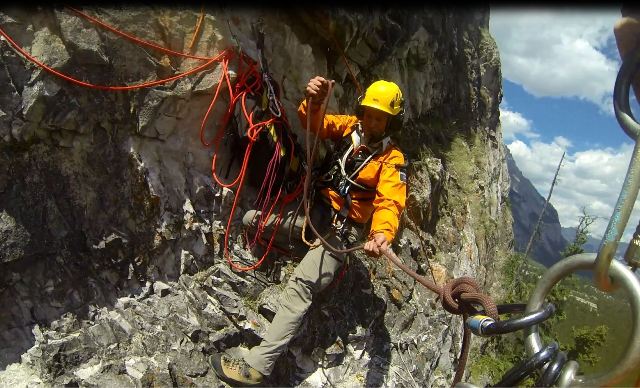 A Visitor Safety specialist belays the patient and rescuer out as the helicopter takes them away from the accident site.

Analysis
After a brief interview with the fallen climber, it appears that he pulled off a loose hand hold and fell. Even though the pitch was bolted, he landed in such a way (on his back) that produced multiple fractures in his spinal column. The climbing team had enough experience for the undertaking, however, climbing routes in the Canadian Rockies are inherently loose and occasionally experienced climbers fall off. The important thing to consider in this case was that the climbing team was experienced and prepared enough to deal with the emergency situation. For example, tying off the fallen climber and knowing the correct emergency telephone numbers.

At approximately 1830 on July 26, 2013 Miette Hot springs staff reported hearing cries for help on the Fiddle River trail on the backside of Sulphur Mountain in Jasper National Park. One Hot Springs staff member responded to the call with a radio and reported to Jasper dispatch that 2 people were stuck in steep, exposed rocky terrain above tree line. They had been hiking down from Sulphur Mountain when they left the trail and hiked down into a loose, wide gully feature. The gully quickly narrowed and they eventually left the scrambling terrain and began down climbing into technical terrain. Eventually, they were unable to move up or down from their chosen descent route and that’s when they started yelling for help. They were not injured but could not safely climb up or down from their present location. The first recon flight was done by visitor safety specialists and the Fire Program’s Bell 206 Long Ranger helicopter which was in the area, while the Bell 407 and sling rescue pilot was on route from Valemount; they were approximately 1.5 km from the trail head. Three Visitor Safety team members were heli-slung below the two subjects, bolted an anchor and one member climbed the rock to access the first victim. Neither subject had a helmet or harness; these were put on to them by the rescuer. A second bolt station had to be made and that subject was lowered to VS specialists at the bottom anchor and slung out to the staging point. The VS specialist then climbed up a further 5 ms to the second subject, built a third station and lowered her to the bottom station and she was slung out as well. As the last rescuer was slung off it was near dark, it started to rain heavily and an aggressive thunder storm with extreme winds forced the helicopter to land early and the team was transported by ground. 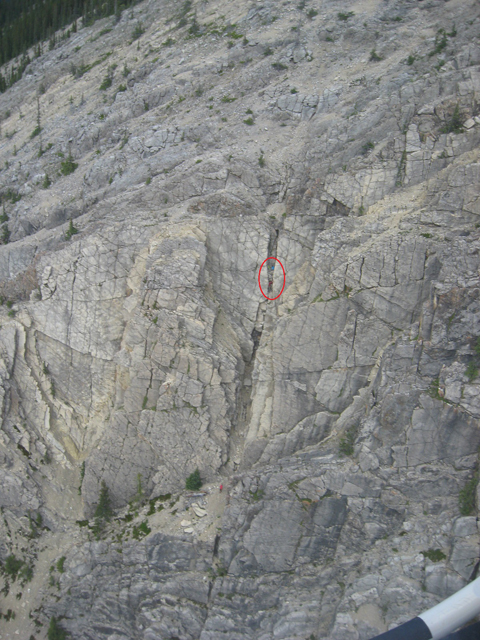 The gully above the subjects was full of loose rock and in order to avoid dangerous rock fall, visitor safety specialists had to climb up from below to access them which added time to the rescue. © Parks Canada

Either by accident or an intrepid sense of adventure the two hikers left the trail and got themselves into a dangerous place without being properly equipped to deal with the terrain (harnesses, helmets, ropes and gear). They had little experience and no equipment to manage the terrain they descended into. They didn’t have a means of communication for the area and were lucky that their cries for help were heard from the sharp staff at Miette Hot Springs who were able to aid rescuers in locating them quickly. The gully above the subjects was full of loose rock and in order to avoid dangerous rock fall, visitor safety specialists had to climb up from below to access them which added time to the rescue. Considering all these factors and the incoming weather, the subjects were lucky to not spend a cold, wet and potentially life-threatening night out on the mountain. We can’t emphasize enough the importance of being prepared for the adventure you undertake. Understanding your limits, carrying the right equipment and properly preparing for the hike by checking local weather and trail conditions are just some of the basics everyone should undertake before heading out to enjoy the mountain environment.