A group of friends decided to scramble to the top of the Tower of Babel at Moraine Lake on the afternoon of June 11th. While descending, one of the scramblers lost control and fell approximately 200 m down a steep scree gully before stopping. When the scrambler came to a rest, he had multiple scrapes including a large cut on his head and a decreased level of consciousness. None of the members of the party had any communication devices with them, so one person had to descend quickly to Moraine Lake Lodge to call for help. Banff dispatch received the call at approximately 21:15 and notified Visitor Safety (VS) immediately. A helicopter was deployed from Canmore and met with VS specialists from Lake Louise and Banff at the Moraine Lake parking lot. Because of dwindling daylight, the VS specialists had to act fast and quickly heli-slung to the site and retrieved the patient who was then passed on to Banff EMS. The helicopter was grounded in Lake Louise for the night due to darkness. The patient was transferred to Calgary and was found to have a concussion and a skull fracture, but no spine or neck issues and is recovering well. 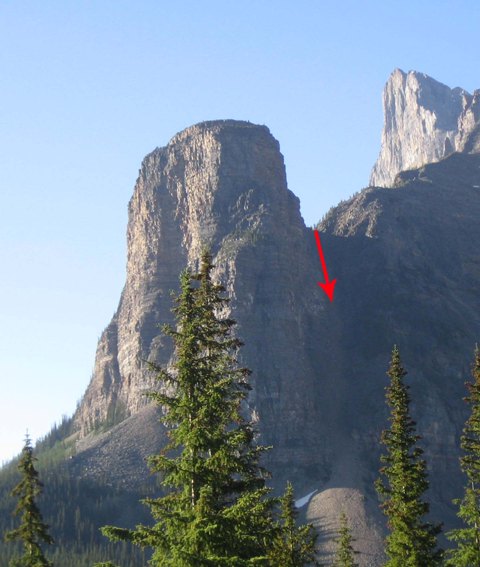 The accident scene roughly showing the length of the fall

Some of the members of this party were inexperienced in moving around in exposed mountainous terrain. Scrambling in loose, rocky terrain is very different than hiking on trails, and often the consequence of a slip can be bad. It is wise to build your experience base slowly so as to ensure that you don’t get in over your head and get hurt.

Additionally, none of the members of the party had any sort of communication device with them. If they’d had the ability to call for outside help immediately after the accident occurred, they could have gotten their friend to definitive care more quickly as well as decreased the risk for the rescuers who had to act quickly to get there before dark. Cell phone service is spotty in this area, but may have been an option, otherwise a satellite emergency device such as a SPOT or a satellite phone would work.

At approximately 2030 hrs a distress call was received from two scramblers stranded in the area of the Mt Hawk/Morro Col in Jasper National Park. Jasper dispatch was able to obtain coordinates of the party through an emergency location method called ‘pinging’ through their cell phone by the 911 call. The visitor safety team was then easily able to locate them using the coordinates by helicopter. The two men were extracted using the heli-sling rescue system, staged from the highway. 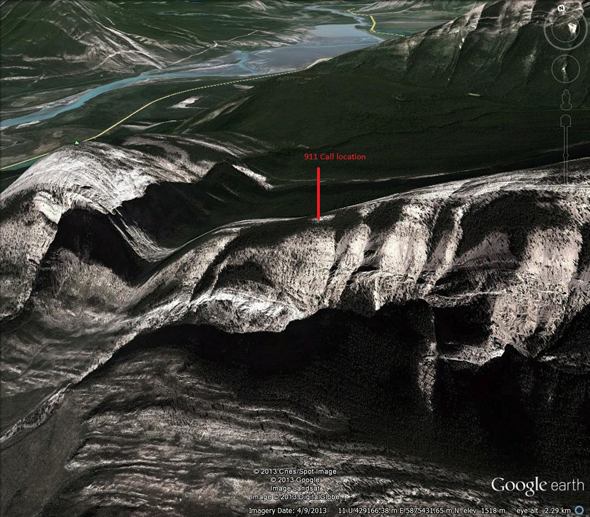 The 2 scramblers, males in their mid 20’s had attempted to climb Mt Morro and Hawk by a non-typical ascent route and as a result became disoriented. They initially tried to descend to Morro Canyon but quickly found themselves faced with a smooth walled constriction and rappel stations for descending but they did not have any gear with them. The canyon continues to descend below their location as high as 200m.

The scramblers were relatively unprepared when they chose their route. They had no map and didn’t properly research the ascent and descent routes for Mt. Hawk. Once they got into the exposed scrambling terrain they didn’t have equipment with them to properly protect themselves (helmets, harnesses, rope and overnight gear) and when they realized this they made the right decision to retreat and call for help before they got into more trouble. Considering the late hour in the day, the emergency ‘pinging’ method used by the 911 call centre proved invaluable to the Visitor Safety team. In this case, it was very reliant on having a good cell signal in order to triangulate their exact position and was a matter of one cellular carrier having better coverage in the valley and was able to give a very precise location. Remember to research your route, carry a trails map and be well prepared to tackle any cruxes along the route.