On April 14, 2013, while skiing (unroped) down the north glacier route on Mt. Hector, a skier fell through a snow bridge into a crevasse. Upon looking up the slope and not seeing their ski partner, the other two members of the group re-ascended a short slope. They found the tracks leading into a crevasse, built an anchor, and one person rappelled into the hole. The partner was located at the bottom of the crevasse, 35m down, unresponsive and not breathing. Realizing there was not much they could do at the site, the rescuer re-ascended the rope to the surface. The two then skied out to the road and reported the accident in Lake Louise.

The Banff Visitor Safety team was notified immediately upon receiving the call. A helicopter with 4 rescuers on-board was dispatched to Mt Hector. The accident site, near 3000m, had been marked with a red flag on a ski pole, and this was easily seen from the helicopter. The rescue team was able to set-down on a rocky outcrop above the site and mobilize for crevasse rescue. They managed to ski down to the site roped-up, established a safe working area, and built two anchors for a rescuer to be lowered into the crevasse. The rescuer located the victim and confirmed the person deceased.

The 3 rescuers on the surface hauled the rescuer and victim from the crevasse in fading daylight. As the helicopter was already back in Canmore due to nightfall, the rescue team dug out a ledge and placed the victim and most of the rescue equipment on it, to be retrieved the following day. The team then descended the normal ski route out to the highway. 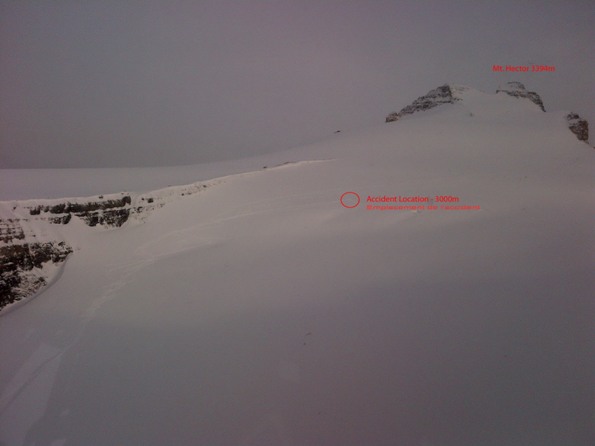 On April 15, 2013, the rescue team was able to fly back to the site and were able to remove the victim and all equipment from the mountain.

This was a very unfortunate accident to a party that had come prepared for glacier travel. The party had ascended Mt Hector’s North Glacier route roped up, which is common practice amongst ski mountaineers. They then descended unroped, with the rope in one person’s pack. This is also a fairly common scenario on this route, but be aware of changing or unfamiliar conditions, snow depths, visibility, etc. when considering this. They were able to get to the victim in the crevasse, as well as re-ascend the rope to get out, showing they had basic rope training. Finally, marking the accident location was extremely helpful to the rescuers. If the group had a satellite phone or SPOT device to raise the alarm sooner, the outcome would not have changed but rescue crews would have been on the scene several hours earlier.

From studying the party’s up- and down-tracks, it appears that the group had ascended too far climber’s left, which led them through a series of steeper rolls and partially-bridged crevasses. In the past 5 years, there have been large sags noticed both far-left and far-right. The normal ascent route, given the condition of the crevasses on this glacier, is generally up the center. This normal route still takes people over crevasses, though the center seems to generally have fewer and smaller holes. Wearing a rope on this glacier is recommended, regardless of the route, due to the number of crevasses and the spatial variability of the snowpack’s depth.

When travelling on glaciers, there are a number of questions that need to be asked. How good is the visibility? How well do you know the terrain and could it be conducive to crevassing? How deep is the snowpack? If there is any uncertainty to any of these questions, a rope should be used to travel safely. This accident report is too limited in its scope to describe terrain recognition, but the age-old advice of travelling with a mentor or guide, to help one learn about terrain in the mountains, must be given.

On April 22, 2013, a party of two skiers ascended Youngs Peak in the Asulkan area with the intent of skiing down the north cirque basin to the east of Forever Young Couloir. At approximately 12:30 pm, the first in the party skied 2/3 of the way down the slope and stopped on a spur. The second in the party then began his descent. On the fourth turn he hit something - possibly a rock - and began sliding down the steep slope. He was unable to self arrest and subsequently fell over a series of cliffs, coming to rest on a 30 degree slope below and sustaining injuries to the head and chest.

His partner skied down to him and performed initial first aid. Unable to get cell phone reception, he skied down until he met a group skiing up. Using their phone, he called 911 and initiated an emergency response. The group immediately skied to the accident site to assist with first aid. 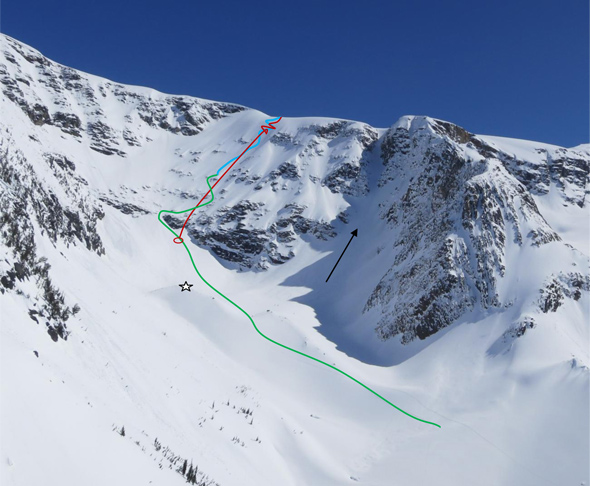 At 12:56 pm, Jasper Dispatch called Parks Canada Visitor Safety Specialists in Rogers Pass B.C. and reported that an air ambulance from Kamloops was responding to a call for an injured and unconscious skier in Glacier National Park. Rescuers were able to speak directly to the reporting person and plan for a technical heli-sling rescue. A rescue helicopter was dispatched immediately, and within half an hour rescue personnel were on the scene of the accident. Within one hour of the initial report, the patient was assessed, packaged and transported to the waiting air ambulance. Sadly, the victim succumbed to his injuries.

Skiers and riders coming to Glacier National Park are beginning to branch away from standard ski lines to explore a more adventurous or challenging ski experience. This may be a response to “congestion” in popular ski destinations caused by the popularization of winter backcountry ski touring. Careful evaluation of committing terrain is required, as slips, avalanches and small sluffs can have serious consequences.