A party of three ski tourers were travelling over a number of days from Peyto Lake to Sherbrooke Lake on the popular Wapta traverse. They were using the Alpine Club of Canada hut system along the way. They left Balfour hut around 11:00AM on the morning of Tuesday March 12th, and crossed over the Balfour high col (approx. 3000m) in the early evening in near white-out conditions. The party un-roped at some point after starting to descend the Daly glacier and were skiing down towards the Scott Duncan hut which was 5km away. At approximately 7:30 PM, one member of the party fell into a crevasse. Another member of the party went to the edge on belay with a rope, and yelled into the crevasse with no response. They also received a weak beacon signal showing a beacon at 35M down into the crevasse. A rope was then dangled down 60m but there was no pull on the end. The party on the surface decided there was nothing the two of them could do given the darkness and weather, so they left their skis to mark the crevasse and walked up to a flat area above the crevasse and dug a snow cave. Their location was at approximately 2700m on the Daly glacier between the Balfour high col and the Scott Duncan hut. They activated the SOS on their SPOT satellite beacon at approximately 11:30 PM on March 12th.

From March 13th-15th, Visitor Safety (VS) rescue crews from Banff and Lake Louise flying with Alpine helicopters tried repeatedly to reach the area, but were unable to reach the site due to unusually stormy weather. Crews were also unable to access the site by ski-touring as the avalanche hazard at all elevations was rated high and conditions were too touchy given the visibility and terrain.

On March 15th, with the weather marginally better, a VS team was inserted near the crevasse by helicopter and they were able to ski tour up to the accident site. A pair of skis was spotted near the SPOT GPS location. The team investigated the skis and found an open hole in the crevasse. One VS rescue member looked into the crevasse and could see down with no visual clues. An avalanche beacon search did not reveal any signals and there was no response to shouts. As the helicopter was preparing to bring in more equipment for an extensive crevasse rescue, the pilot spotted a party of two on the surface who were a few hundred feet above the VS team. Immediately, the VS team’s priorities shifted to the two survivors, and the team skied up to them and escorted them to the nearby helipad. The survivors were evacuated by helicopter in very bad weather and taken to a hospital where they were treated for minor cold injuries. The weather and avalanche conditions were very poor for the next 4 days, until a clearing on Tuesday March 19th, when crews were finally able to access the crevasse site and reach the deceased. 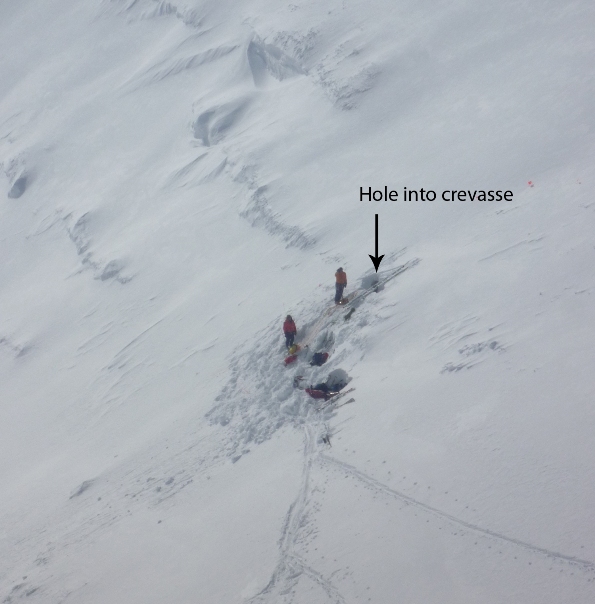 Visitor Safety team at the site of the crevasse fall.

This incident occurred on a popular ski touring route that is often undertaken at that time of year. One causal factor for the incident was the party deciding to take off the rope in near whiteout conditions and fading daylight. It is not uncommon for parties to ski downhill un-roped on glaciers but parties should be aware of changing or unfamiliar conditions, snow depths, visibility, etc. when considering this. Another factor was that the party followed a route to the Scott Duncan hut which was different than the route most parties take, and ended up in steeper, crevassed terrain. Given their experience level, darkness, and the stormy conditions, the party thought it would be too dangerous to venture down the crevasse or to continue their way to Scott Duncan hut. This decision was the right one given their circumstance. In these situations, it may be possible to descend the hole to check on the fallen person, but actually getting someone out of a tight crevasse is a very difficult and technical process. It typically requires more rescue resources than parties have available to them. 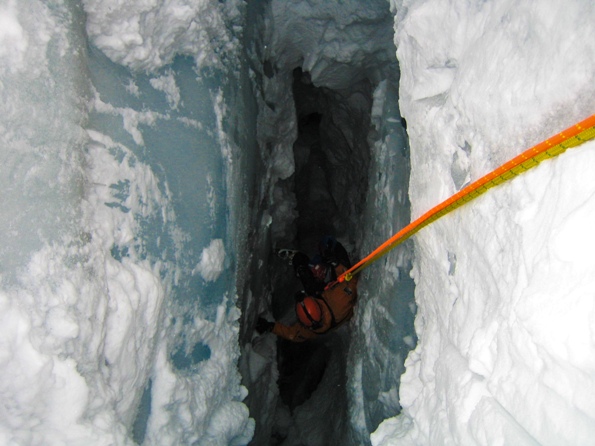 On Tuesday March 19th, when crews were finally able to access the crevasse site and reach the deceased

The party left on the surface were prepared to bivy for numerous days with sleeping bags, a stove and fuel, food, extra clothing, and navigation equipment. They also had a SPOT satellite device which was accurate and enabled them to initiate a rescue. Of note, SPOT devices are only one way communication, so although Visitor Safety knew there was a call for help, they did not know the nature of the incident. There are many different types of devices on the market, from satellite phones to two way satellite messaging devices. If you purchase one, know who to call and how your particular unit works.

Around 2 pm on March 24, 2013 a party of three began a ski descent down the SW slope below Sifton Col. It was a mild, clear day with light winds. Two members of the group remained at the top of the slope, while one member skied down to assess avalanche conditions. The skier triggered a size 2.5 slab avalanche from near mid-slope, was knocked over and carried down the slope. He was buried under approximately 1.5 m of debris in a natural terrain trap.

The two remaining party members performed a companion rescue and uncovered their unresponsive partner. He was facing downhill. CPR was initiated immediately and the patient was moved to a safer location, less affected by possible additional avalanches. One person stayed on scene and continued CPR, and the second person skied back to the Rogers Pass Discovery Centre to report the incident. 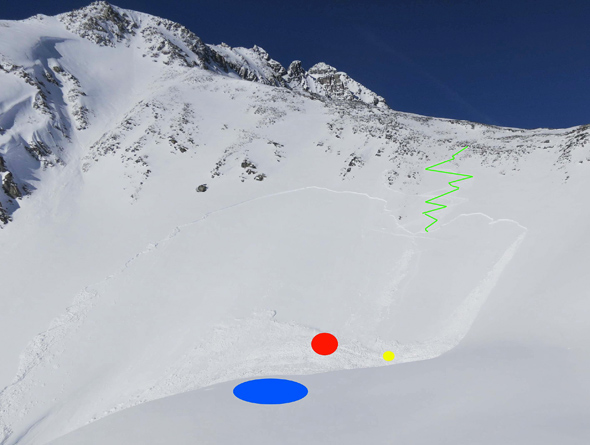 Parks Canada Visitor Safety specialists received the report of the incident at 3:25 pm and initiated a rescue response. An assessment of the avalanche hazard on scene was performed from the helicopter and it was deemed safe to land on a flat spot next to the toe of the avalanche deposit. Two rescue specialists continued CPR with an AED, and were spotted by a third rescuer, in the event of further avalanche activity. The remaining party member was flown back to Rogers Pass immediately, and shortly afterward the victim and all rescuers returned to Rogers Pass.

The avalanche was likely triggered in a thin spot on a scoured, south-facing alpine slope. After the avalanche, exposed rocks were present on the bed surface which would not have been visible prior to the event. Shallow, weak spots in the snowpack around rocks are common trigger points for avalanches.

The avalanche failed on a persistent weak layer made up of surface hoar crystals on top of a strong, thick crust. This condition in the snowpack, combined with strong direct solar radiation the slope received during the afternoon of the incident, contributed to the size of slab that released.

The avalanche failed well above the trigger point and the victim was carried into a depression, where the debris piled up. Terrain traps, like this depression, need to be evaluated carefully as they increase the consequences when caught in an avalanche.

The group made a good decision to only put one member on the slope to assess the conditions and have spotters in safe locations. During the companion rescue, the two party members showed great foresight by moving the victim to a location less affected by surrounding avalanche terrain. Rescuer safety is a top priority in every rescue. 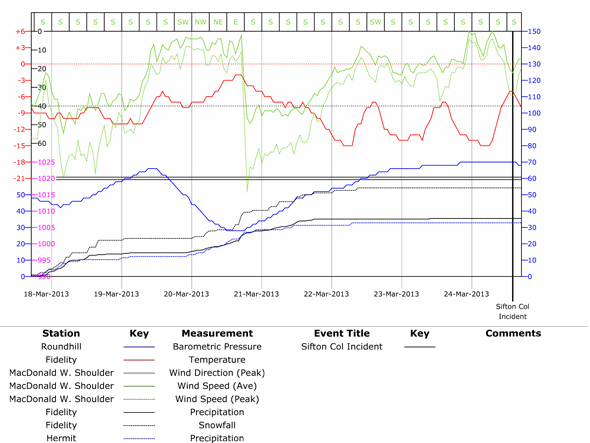 Weather information prior to the incident. Click for larger version.
© Parks Canada