At 16:00 on February 3rd, a young man fell and broke his lower left leg while back-country snowboarding on the east side of Fossil Mountain near Cotton Grass Pass. The location is about 4 km from the Skoki back-country lodge.

The snowboarder’s partner skied back to Skoki and called in the accident. By the time the accident was reported to Parks Canada, it was too late to fly the helicopter, so a ground evacuation was organized. Fortunately for the injured snowboarder, there was a mountain guide from Yamnuska Mountain Adventures staying at the lodge and he responded (with the reporting person) to the accident site. The mountain guide was able to stabilize the patient and begin transport to Skoki Lodge. 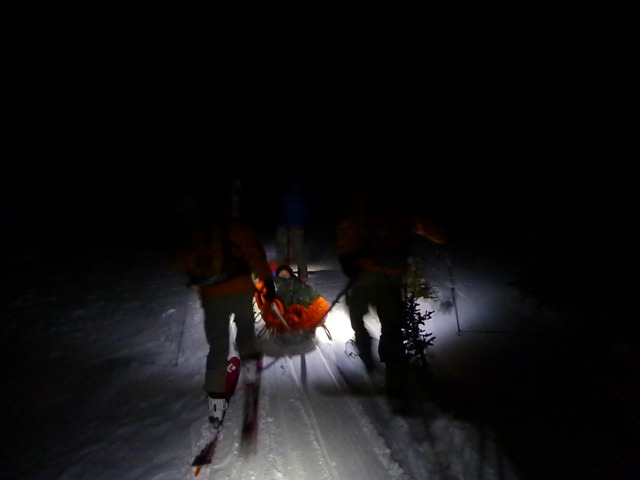 Parks VS Specialists with the help of a Yamnuska mountain guide transport the injured snowboarder back to Skoki during the night.

A ground crew of four Visitor Safety Specialists were mobilized to snow-mobile into Skoki and help with the evacuation. The Parks crew, with the help of the Yamnuska guide transported (via toboggan) the patient back to Skoki Lodge arriving at mid-night. The next morning high winds prevented a rescue helicopter from landing so the patient was transported to Lake Louise by snowmobile where an ambulance then transported him to Banff Mineral Springs hospital.

Injuries in the backcountry are always a possibility and it is up to the group to be prepared for all eventualities. In this case, if the group had had the ability to call for outside assistance as soon as the injury occurred, they would have been able to be picked up by helicopter that afternoon, getting the patient to definitive care earlier. Luckily, it was a relatively warm, calm night and the rescue party from Skoki lodge was able to transport the patient half the distance back to the lodge by the time reinforcements from Parks Canada arrived. Poor weather for flying the next day reminded everyone how remote it can be when you are in the backcountry and weather is bad. Thankfully with this incident, the injury was stable, so there was no rush to get to the hospital quickly.