At approximately 1400hrs, a party of 4 bootpacking up the SE face of Rogers Peak accidentally triggered a size 2.5 avalanche. The avalanche propagated 30m above them, and was 30cm deep, failing on facets on a suncrust. It was 30-40m wide and ran the entire face, stopping below the bergschrund at the bottom. The debris was 1-2m deep. Three members of the group were able to escape and take cover behind rocks, while one person was struck by the avalanche. The individual was carried ~30m before being able to escape the flow, losing only 1 pole.

A different group that had not continued up Rogers Peak due to concerns with the snowpack conditions, had observed that the face had slid (see photo) and that they could only see one person moving adjacent to the slide. They acted quickly. Two individuals skinned back up to initiate a rescue, while the third contacted the Parks Canada Emergency Dispatch via cell phone to report the incident with potential burials. As the Visitor Safety Specialist took the initial report and prepared to initiate a rescue response, the party that was involved in the avalanche contacted Dispatch as well, notifying them that they had been involved in an avalanche but that everyone was ok and no rescue response was required. 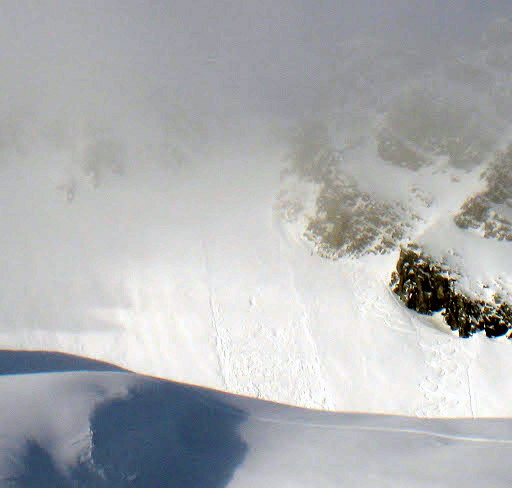 The route of ascent, as well as the tracks of the group that aborted their ascent, are visible to the viewers right. The fracture line is obscured in the cloud cover.
© Fraser Sprigings

The Avalanche Forecast for the day rated the alpine as Moderate, identifying steep solar aspects as the primary concern. The Moderate rating means that while natural avalanches are unlikely, human triggered avalanches are possible on specific terrain. The group involved tried to mitigate their exposure by staying close to the side of the face; however, it is difficult to entirely avoid exposure on this ascent. The group that observed the avalanche took appropriate action - they notified the Emergency Dispatch and initiated self-rescue. Given the time of day, had a rescue been required their actions may have saved lives. The involved group prevented an unnecessary rescue by reporting that everyone was ok. By reporting the avalanche, they provided important information on conditions for the Avalanche Forecast which could prevent similar accidents.