A lone hiker was enjoying the afternoon views from the top of the Little Beehive trail near Lake Louise. He decided it would make a great picture, and set up his camera with the timer on so that he could be in the shot. While backing up to get in the frame, he went a bit too close to the edge and fell approximately 45m down a steep snow gully. He managed to stop his tumble, but had hit his head and received a deep cut to his hand. He attempted to climb back up, but the snow was deep and bottomless, and the slope was so steep he couldn’t make any progress. After about 30 mins of effort, he hadn’t made any progress and attempted to call for help using his cell phone. The time was 16:00, it was approximately -1, he wasn’t wearing a toque or gloves and his denim pants were soaked.

Banff dispatch received the call and transferred it to Visitor Safety right away. The VS Specialist in Banff immediately called in a helicopter as he knew there was not much daylight left to fly in. After picking up a second VS Specialist in LL, the rescue team quickly spotted the subject from the air and organized a heli-sling rescue. The subject was slung off in failing light and spared a possibly fatal night of -25 degree temperatures. 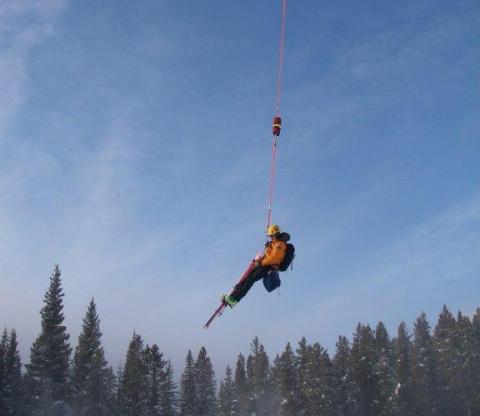 A VS Specialist is slung to the accident site

Analysis
It was unlucky for this hiker to fall off the edge of the lookout; however, one should always be cautious when approaching the edge of a steep slope or cliff, especially in winter. Often the edge might be soft or slippery and it is possible to punch through or slip before you are right at the edge. In addition, it is essential to wear/ bring appropriate clothing for the winter environment. Even if it is a nice warm day in the sun, conditions change quickly in the mountains, and if you are injured and forced to stay out late, it will get cold very quickly. Synthetic clothing that doesn’t soak up water and at least one extra warm layer are essentials when travelling in the backcountry in the winter.

Fortunately, the hiker had a cell phone with him and called for help before (just barely though) it was too late for the helicopter to come and rescue him.