Parks Canada Visitor Safety was called to assist Kananaskis Public Safety for a climber who had been struck by falling rock, 2 pitches below the summit of Yamnuska. The party of 4 had intended to climb the route Diretissima but had gone off route. One of the lead climbers was approximately 30m up when a block he was on “the size of a mini fridge” gave way. He had a camming device behind the block which came out and he fell 10m with the block onto another camming device. The belayer saw the fall and the block coming, wrapped the rope around his leg and braced for impact. The rock broke in two and hit the belayer on the back and head, knocking him out, and severely damaging the rope. The fallen leader quickly made an anchor, fixed the climbing rope, and descended to the belayer on prussiks, while the other party above descended to help. They called Kananaskis Public Safety who instructed them to stay put and help was on the way. The belayer regained consciousness eventually, but was bleeding profusely from his head. 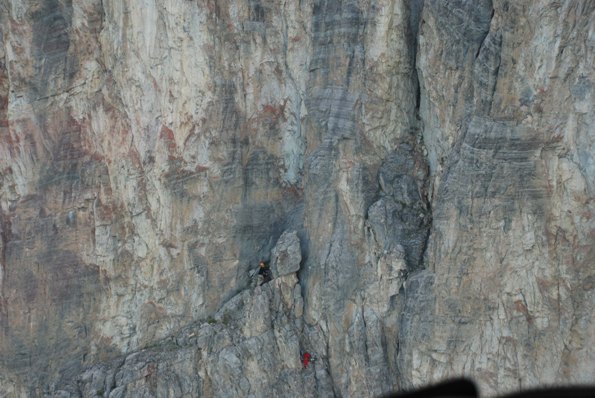 Kananaskis Public Safety and 2 Banff Visitor Safety Specialists arrived on scene by helicopter. After a reconnaissance, one Visitor Safety Specialist was slung onto the sloping ledge with a 200 ft. longline, which is twice the usual length. This gives the pilot more room to manoeuvre and stay a safer distance from the wall. There was approximately 30 minutes of daylight available for flying. Once inserted, the rescuer drilled a bolt anchor, and the rescuer and patient were heli- slung off the face using an anchor release technique. The remaining climbers were given headlamps, and were able to self evacuate up the route and walk off.

Two inexperienced scramblers in their twenties went up the normal route up Cascade Mountain, starting from the Mount Norquay parking lot in Banff. They made it to the summit just after midday, but on their way down, they missed the trail and ended up going down the wrong way onto the NW facing “amphitheatre”. This is a face with steep, exposed rock slabs and very loose ground, considered to be climbing terrain. They continued down, making it to within 200m of walking terrain when they decided to call for help. They had also separated from each other while down climbing.

Visitor Safety was notified by cell phone from one of the scramblers of their predicament. It was now dark, so a helicopter and rescue party could not be dispatched until morning. They were told to stay in place and to not move. In the morning, 2 visitor safety specialists were inserted via helicopter longline. The 2 scramblers had reunited and had moved onto some exposed slippery slabs above a steep cliff. An anchor was made above them, and a specialist was lowered to put harnesses on them. They were then belayed up to a ledge and longlined off of a better ledge. They were both uninjured. 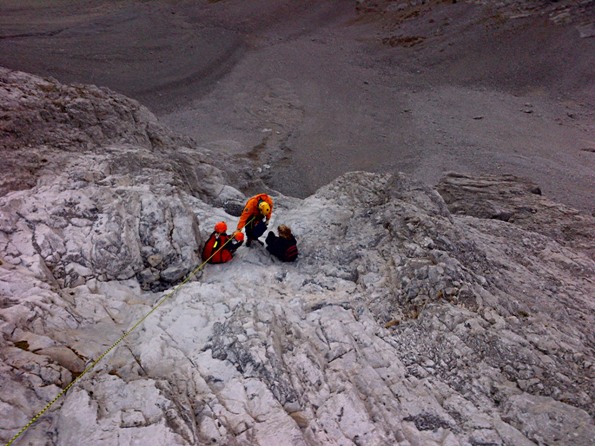 An inexperienced party of two decided to turn around before making the summit of Mt. Victoria. On their descent, the female member of the climbing team fell and slid down the NE face for approximately 45m. She miraculously managed to self arrest. Her climbing partner was unable to assist her. He went down to the hut and called Banff Dispatch. 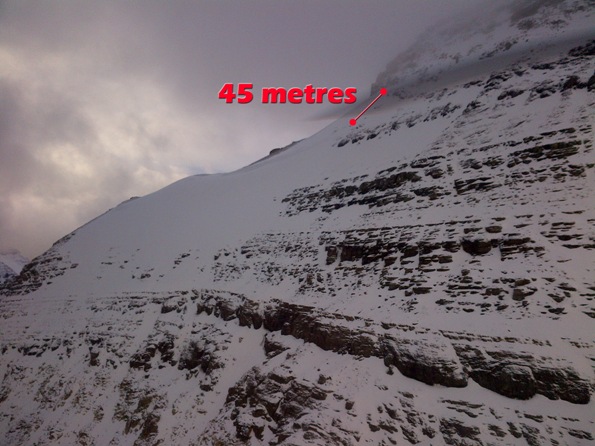 A team of two Visitor Safety Specialists was dispatched from Banff. They made several unsuccessful attempts to access the stranded climber’s location. Due to poor visibility and strong winds, they were forced to land at the Plain of Six Tea House. Eventually, they returned to Lake Louise to re-fuel, and then made a successful trip to get the team members into Abbot’s Pass. The two rescuers were able to climb up and meet the male (and un-stranded) member of the climbing team. They left him at that location and continued up, searching for the stranded climber. They made voice contact at nightfall. The rescuers placed a piton anchor in the rock above the patient, who was found 45m below ridgeline on the NE face. One rescuer was lowered down and clipped into the stranded climbers harness. The rescuer and stranded climber were then belayed back up to the ridgeline. From here, the rescue team guided the uninjured climber back down to her climbing partner, now, in complete darkness. Each rescuer guided one member of the climbing team down to Abbott’s Pass hut, where they all spent the night. The next day, a helicopter picked up the climbers, along with the rescuers, and flew them back to Lake Louise. 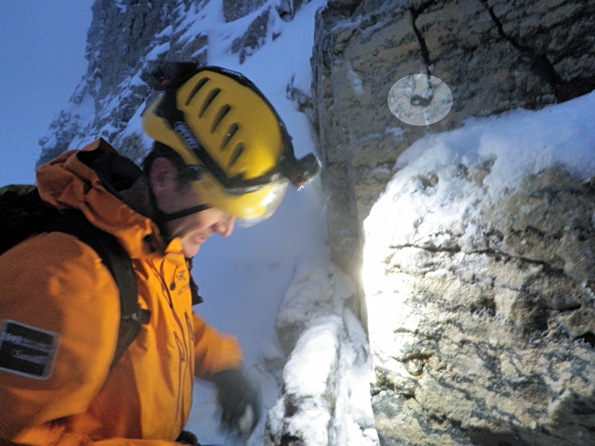 Analysis
The climbing party admitted that they were unprepared and under-experienced to climb Mt. Victoria. Equally important, when things went wrong, they lacked the skills to be able to rectify their situation. Furthermore, they explained that they had learned about climbing from reading books. The lack of formal instruction and/or genuine mentorship from an experienced person was the major contributing factor that lead them into the predicament on Mt. Victoria. Climbers, new to the activity, are highly encouraged to seek proper instruction from an ACMG guide. For financially restricted individuals, the Alpine Club of Canada is a place to meet experienced individuals where some mentorship can take place.