On March 2nd, two snowboarders left the Sunshine Ski Village boundary over Wawa ridge and down what is called the White Wizard which feeds into Healy Creek. They did not have avalanche gear and the hazard was rated HIGH during that time. They worked down some very steep, cliffy terrain and ended up stranded above a thirty metre high ice waterfall when they decided to call 911.

A helicopter was dispatched from Banff and attempted to longline two Visitor Safety (VS) Specialists into the scene at approximately 1730, but had to abort due to high winds. It took the helicopter twenty minutes to land with the worsening weather, resulting in a long, cold ride on the line for the VS specialists.

Later that evening, an attempt was made by three VS Specialists as well as one sunshine staff member to tour in from the top on skis at night. Twenty-five centimetres of snow had fallen under strong winds and the attempt was aborted approximately 200m above the stranded snowboarders due to avalanche hazard to the victims and rescuers.

In the morning, another helicopter attempt was shut down due to wind. The rescuers went by snowmobile up Healy creek and ski toured to the base. The waterfall was climbable, but avalanche hazard was deemed too unstable for the rescuers. More new snow and strong winds were increasing the avalanche hazard. Bombs were placed on the slopes below to stabilize the snow. A helicopter attempt was made to throw the stranded snowboarders some food and supplies, but failed due to extreme winds. 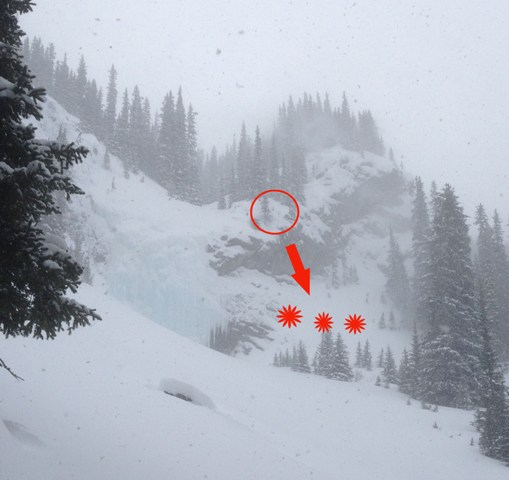 The scene of the rescue. The circle shows the location of the snowboarders. The stars show the slope that was bombed, and the arrow is the cliff the snowboarders were lowered over to get to safety. © Parks Canada

A final attempt by the rescuers was made to go in from the top again over Wawa ridge in the daylight and work down to the victims. The rescuers reached the stranded snowboarders, who were in surprisingly good health considering they had spent a stormy, winter night out with no extra supplies. The rescuers then lowered the snowboarders thirty metres down an overhanging cliff to the slope they had previously stabilized. Sunshine staff with snowmobiles then gave the victims a ride out Healy creek to Sunshine. 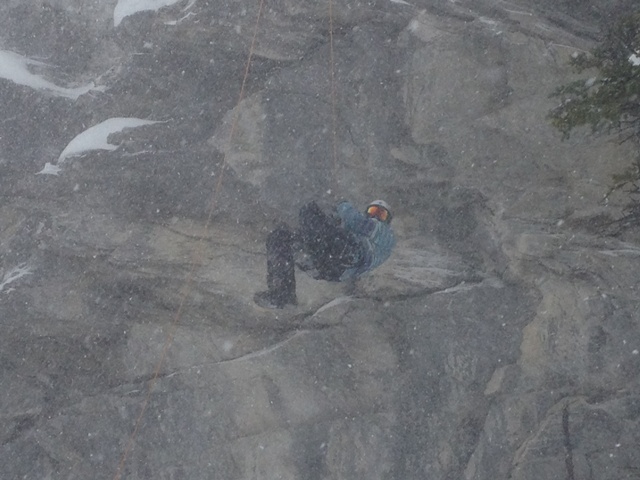 A snowboarder is lowered over the cliffs onto the previously bombed slope. © Parks Canada

Because of the extended period of bad weather, this was an unusually drawn out rescue with multiple attempts from different angles. In bad weather conditions when helicopters can't fly, mountain rescue becomes a much longer and more inefficient process. Due to the determined and repeated attempts of the Parks Canada rescue team, with help from the staff of Sunshine Ski Village, the stranded snowboarders were reached before the effects of exposure had affected them severely.

Luckily, both snowboarders were uninjured and healthy, and although it was a windy and snowy night, the temperatures were relatively mild. The boarders were able to find shelter underneath a tree and weathered the night surprisingly well. They did the right thing by staying put and waiting for rescue given the avalanche conditions and the unforgiving terrain.

Good communication due to cellular service was another major contributor to the positive outcome of this rescue. The rescuers were able to stay in contact with and give instructions to the stranded snowboarders throughout the event.