At 1350, Banff Dispatch received a call from an injured skier that had just tumbled down the Aemmer couloir on Mt. Temple. The subject stated that he had “tomahawked” down the 600m couloir, after falling on his second turn. Amazingly, he was still coherent and walking slowly, but had lost one ski and was quite beat up.

Three Visitor Safety (VS) Specialists were dispatched by helicopter from Banff along with a rescue pilot from Alpine helicopters. By 1440, they were on site on Mt. Temple. Because the subject had fallen to the bottom of the couloir and landed on relatively flat ground, they were able to land nearby and load the patient internally into the helicopter. The patient was evacuated to Lake Louise where he was transferred to EMS, and then the helicopter came back to pick up his partner and the remaining gear. 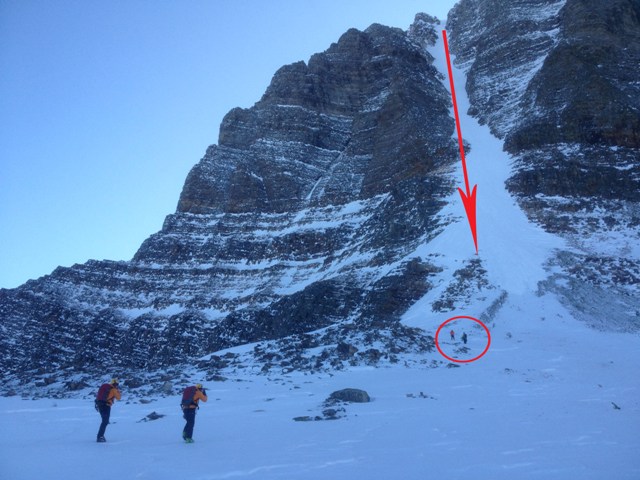 Two VS Specialists approach the accident scene. The red arrow shows the approximate
line of the skier's fall © Parks Canada

The Aemmer couloir is a serious ski line with 45-55 degree slopes at the top. When stability is good enough to go up there, the snow is often packed hard by continual sluffing, making for challenging skiing with little chance for self arrest. In these conditions, the couloir is definitely a ‘no-fall-zone’ with serious consequences for a mistake.

This skier is very lucky to have ‘walked’ away from such a big fall with only minor injuries: he was skiing at the ski hill three days later. It was a good thing he was wearing a helmet, which saved him some serious harm, and was able to use his cell phone to call for help quickly, sparing himself a cold night out or a painfully long self evacuation.

At 1100, Banff Dispatch received a cell phone call from an ice skater who had fallen while skating on Lake Minnewanka and was complaining of pain in his upper leg, possibly a broken femur. Two Visitor Safety (VS) Specialists teamed up with a rescue pilot from Alpine helicopters and flew out to the site. The weather was sunny and calm, but the injured skater was lying on ice and getting cold quickly. The VS Specialists were able to land near the patient and start to package him for transport to an ambulance waiting at the staging area. A third VS Specialist met the helicopter at the staging area and rigged it for a sling rescue. Once the patient was packaged, he was slung with a VS Specialist to the staging area and transferred to Banff EMS. The helicopter then returned to pick up the second VS specialist and the remaining gear. 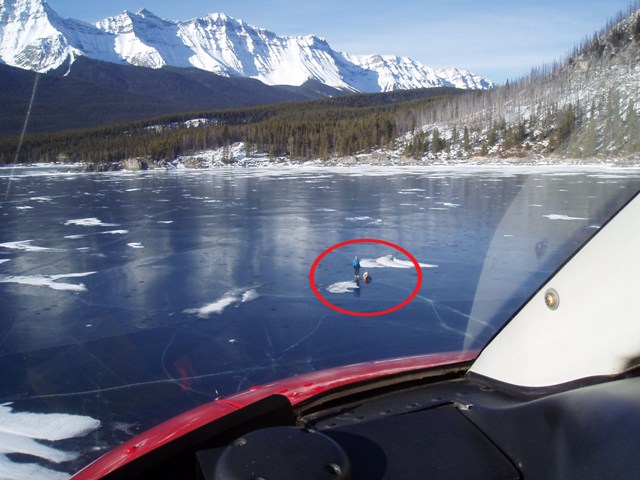 The injured skater is an experienced outdoors person, and was sufficiently dressed for the weather this day. Even so, he quickly got cold lying on the ice. The patient “does not even like skating” and took a relatively small fall, which unfortunately resulted in a broken femur. He went into surgery quickly and is now recovering well.

From a rescue perspective, this rescue was difficult because of the incredibly icy conditions found not only on the lake, but in all the parking lots used as staging areas. This made for difficult conditions for the pilot as he had to maintain power on most of the landings to prevent the helicopter from sliding out of control.