The reporting person last saw the climbing team at the carpooling rendezvous point in Calgary at 6:45 am on June 25th. The climbing team had left a vehicle there and said they were intending to climb Mount Edith. While driving to Banff they changed their minds, wanting something a little more challenging, and decided to climb Mt. Louis. They left the trailside parking lot at approximately 8:30 am and reached Mt. Louis at approximately 10:30 am. After seeing a party on the Kain route, they decided to climb the Gmoser route instead. They got off-route in a couple of locations, but always managed to get back on-route. They reached the summit just as it was getting dark. Not wanting to take on the descent in the dark, they reinforced a rock-walled bivy at the summit (2682m) with snow blocks and stayed the night. They had left their cell phones in the car and were unable to update anyone as to their status. That night it snowed down to 2100 m.

After a long, cold night, they began their descent down the normal rappel route the following morning. On the descent, there is a spot where one must climb 10 m to a notch to continue rappelling. They got off-route one rappel above this when the leader climbed up too early and continued upwards for approximately 30 m. After not finding any more rappel stations, he thought that there must be a typo in the book, and was intending to climb up further to find the rappel route. 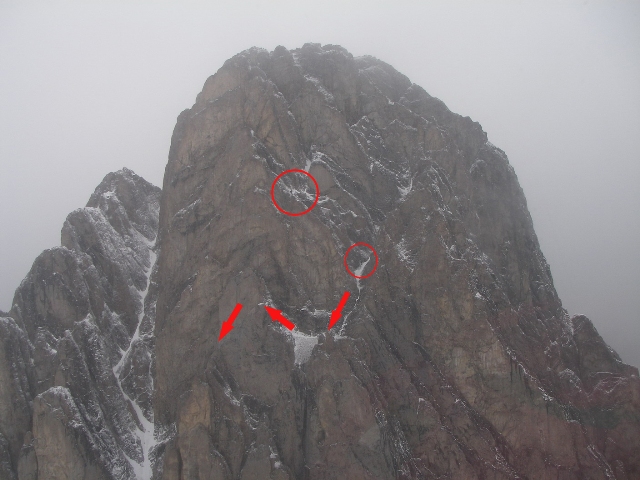 The Mt. Louis descent with circles showing the position of the overdue climbers, and arrows showing the correct descent route © Parks Canada

A Parks Canada Visitor Safety (VS) Specialist was notified of the overdue party at 6 am. After receiving confirmation that the vehicle was still at the carpool drop-off area, Parks Canada VS checked the trailhead and found the vehicle there. A note was left on the vehicle to notify Banff Dispatch immediately upon their return, and the overdue climbers’ cell phones were called and text messaged. At 8 am, Parks Canada VS initiated an aerial search of Mt. Edith. After a thorough search of the ascent and descent options, and likely problem locations, the team found no evidence of the peak being climbed recently. The rescue team then decided to check Mt. Louis, the only other popular climbing objective in the area, in case the climbers had changed their itinerary.

After searching the ascent of Mt. Louis, the team noticed the recently fortified bivy on the summit, and began to search the descent. At 9:30 am, the climbers were found part-way down the descent, apparently uninjured, with the leader off-route and the other climber still clipped into the rappel anchors. They signalled for help by holding their arms outstretched overhead making the "Y" signal. The rescue team left the scene to refuel and gather heli-sling equipment.

On their return, the rescue team rechecked the position of the climbers. The lead was bringing the second climber up to an anchor he had made on a small ledge. The team landed in Gargoyle valley and set up to sling in to the climbers. The first rescuer went in, reinforced the anchor, and prepared the climbers to be slung out. He confirmed they were the overdue climbers and that they were uninjured. The second rescuer slung in, stayed on the heli-sling line, and slung one climber off the mountain. The helicopter then went back to pick up the first rescuer and the second climber. By 10:45 am, both climbers had been slung off the mountain, flown into Banff, and returned to their vehicle. 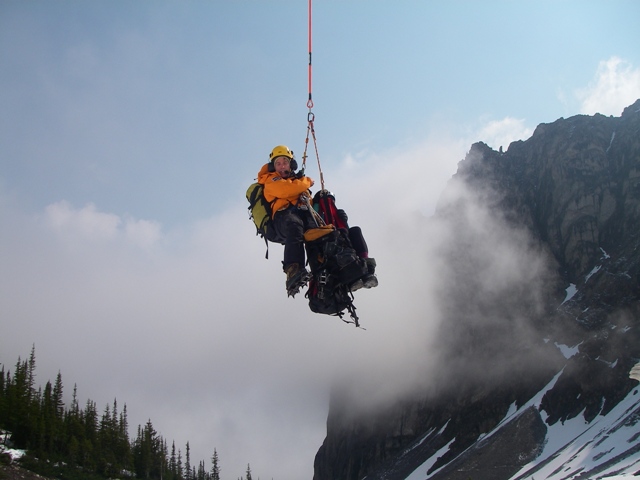 Mt. Louis is known for being a long day, with route-finding challenges on both the ascent and descent. Many parties start before dawn in order to be clear of the summit before afternoon thundershowers build. Despite long day lengths at this time of year, the late start (8:30 am) from the trailhead left the party with insufficient time to complete the climb and descent in a single day. In addition, the party was unaware they would have cell coverage from the upper part of the mountain, so did not bring their cell phones to check in that they were ok. Luckily, they had some extra clothing (toques, jackets) to assist in weathering the night when they wisely chose not to tackle a fairly complex and unfamiliar descent in the dark. Had they informed the reporting person of their change in climbing objective, they would have been found much sooner by the rescue team.

A group of seven advanced level kayakers were paddling the Class 5-6 rapids and falls on lower Red Earth Creek at around 2:30 PM. On the falls the "Jugbuster", a 30' drop with a huge hole at the bottom, some of the group dropped OK, but one kayaker was sucked underwater into the hole and did not surface. Eventually some of his gear came up and finally, his boat, and then he floated up face down. It was estimated that as much as five minutes may have elapsed before he floated to the surface. The kayaker was then washed downstream and another boater took off after him. About one kilometre downstream the victim was seen circulating in an eddy. Other group members had to rappel down to him to extricate him from the water as the rescue boater was already below and could not get up the canyon to his location. It was estimated that it was at least forty-five minutes to one hour before the others got him up on to shore and began CPR. 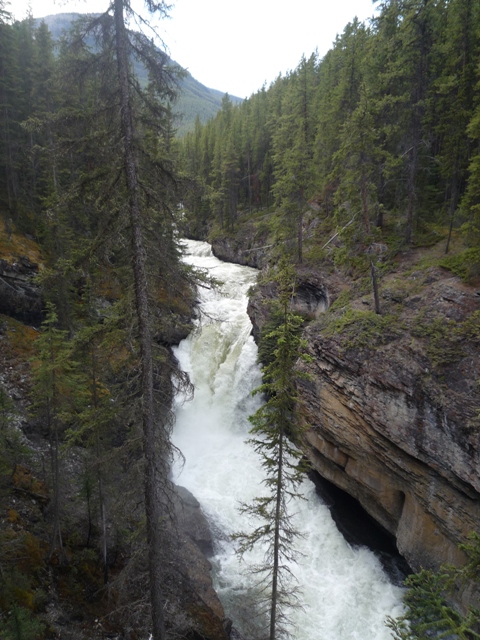 One of the party ran down and phoned for help with her cell that was at the vehicles. Parks Canada Visitor Safety Specialists responded from Banff and Lake Louise, and a helicopter was called from Canmore. Two Visitor Safety Specialists hiked up the canyon to make contact with the kayakers. The victim was on the rocks at the bottom of the canyon approximately 1.5 km upstream from the road. CPR was being performed by the group members. The helicopter pilot was able to insert the rescuers into the canyon on a 150' long line and the patient was put on a board and flown to nearby EMS who continued life support efforts. The patient had a core temperature of 24.5 degrees, so internal warming was performed at the hospital with ongoing rescue CPR. The victim was pronounced dead at approximately 7:45 PM.

This type of serious white water is becoming more popular as bigger drops and wilder water become the norm. When things go wrong there is little margin for error.