A climbing party became stranded on the second rappel on the right side of the Weeping Wall. The descent involves three, fifty metre rappels to reach the ground. The party had tied knots in the ends of their ropes for the first rappel, but had forgotten to remove the knots when they pulled the rappel rope. This resulted in one of the knots becoming jammed in the anchor and the rope becoming stuck. The climbers were stuck at the first station with one hundred metres of rappelling still below them, so they decided to cut their rappel rope. This left them with one full sixty metre rope tied to twenty metres of rope cut off the other rope. They decided to fix this eighty metre combination of two ropes to the station and rappel on the single line to the last station where a second group of climbers had left a rappel line in place that they could use to reach the ground. When the first climber started to rappel and reached the knot tying the twenty metre chunk to the sixty metre rope, he got stuck. It was only the climbers second time rappelling and he did not know how to overcome this problem and became stranded on the fixed line. The second group of climbers reported the situation to Parks Canada Dispatch, who notified the Parks Canada Visitor Safety team. 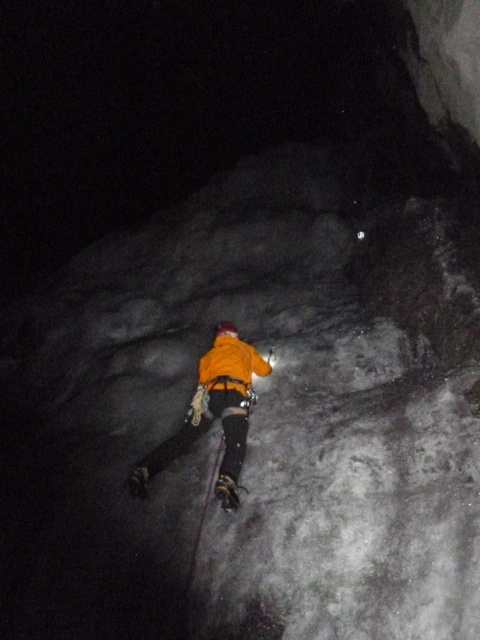 The climber was stranded on the rappel rope from 6:00 pm until 1:30 am. This is a long time to be hanging on a rope in your harness. Inexperience was the primary contributing factor in this incident. If the climbing party had ensured that they had removed the knot from the end of their rope before rappelling, the entire situation could have been avoided. Even after they had gotten their ropes stuck, if they had thought about the length of rappel needed to reach the next station, they could have avoided rappelling on the fixed line with a knot in it altogether (as they only needed to rappel fifty metres, not eighty). Finally, after deciding to rappel on the rope with a knot in it, if they had known some basic rescue techniques, they could have overcome the knot in the rope and continued rappelling to the ground without assistance. Generally, it is better to have the more experienced climber rappel first, as they can sort out the ropes and set up the next rappel station. Obviously, having the climber with little rappel experience go first was a mistake in this situation. Fortunately, the climbers were not hurt and were able to walk back to the trailhead on their own.

A climber was attempting the climb "Mixed Master", which was mostly melted out. Due to the conditions of the route, she decided to back off the route. She put her rappel rope behind the slings that were tied to two fixed pitons at the station. When she started rappelling, one pin pulled and she fell twenty metres to the snow below and then tumbled another seventy five metres or so down slope. When her friends tried to move her down to the road, she was complaining of neck pain, so they stopped moving her.

The group ran to the nearby Weeping Wall and contacted a UIAGM guide who called the incident in to Parks Canada dispatch on his radio. Both parties then made the patient secure and warm with thermarest pads and sleeping bags. Visitor Safety Specialists from Banff responded by helicopter and vehicle. The patient was secured to a vacuum mattress/scoop stretcher, heli-slung to the staging area and transported internally by helicopter to the Banff hospital.

The climber was lucky to get away with only minor bruising. The major contributing factors in this accident were:

The climber made a good decision to back off when she did; however, did not accurately evaluate the quality of her rappel anchor. This resulted in a bad fall which could have been much worse. 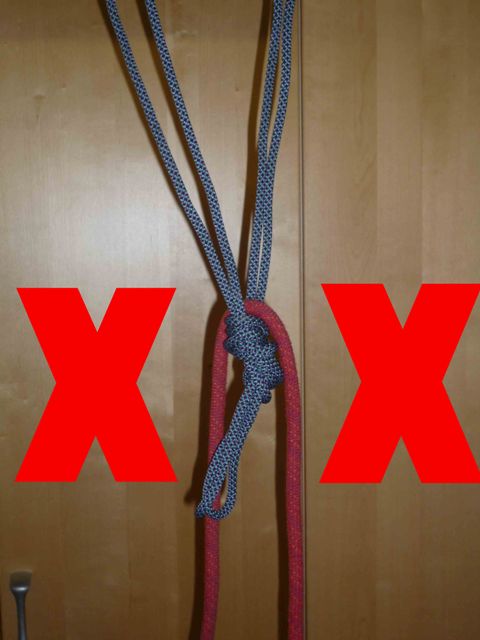 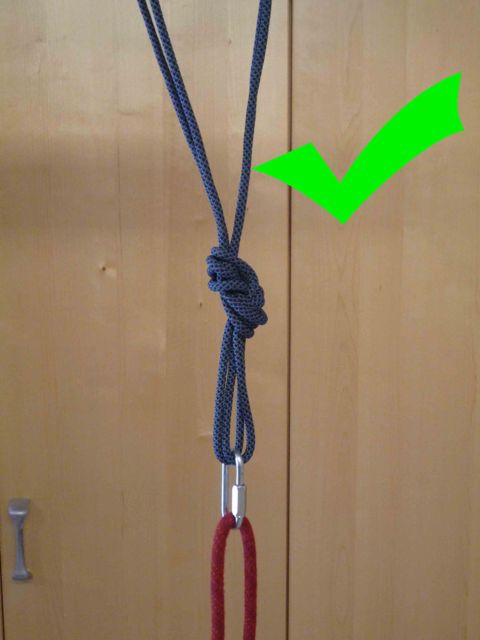 The incorrect and correct ways of looping a rappel rope through an equalized
anchor. The incorrect way has no redundancy (ie. if one anchor piece fails, the
whole anchor is compromised), while the correct way is redundant.
© Parks Canada

Two experienced ski tourers set out for an overnight trip, intending to travel over the Uto-Sir Donald col and camp in the Beaver Valley. Leading up to their trip a series of storms deposited 120 cm of snow, and the forecast was for a high pressure system to bring the first real sunshine and warmth of spring. At approximately 14:00hrs, the skiers had reached the top of a moraine, a high point relative to the adjacent terrain, below a large west facing snow slope leading to the Uto-Sir Donald Col. Recognizing the severity of the slope above, one skier waited on the high point of the moraine, believing it to be the safest spot, while the other took the lead and began to ascend towards to the col.

Before committing to the slope, the leader dug a snow profile and decided it was safe to proceed. He continued upward, probing with his ski pole, feeling the snowpack for weak layers. When he was approx. 200m above his partner, he felt his pole touch rocks; the snow was suddenly much thinner, only 70cm deep. He took one more step and felt a large “whumph” as weak layers in the snow under him failed. Seconds later the slope began to fracture all around him.

Both individuals were caught in the avalanche. The individual who triggered it stopped on the surface and was able to dig himself out. Once free he ran downhill over the debris to begin searching for his partner at the last seen point; the high point on the moraine. As he turned his transceiver to receive and began searching, he saw his partner’s boots sticking out of the debris. Rushing down, he began digging. His partner was buried completely upside down in a vertical position with his feet exposed at the surface. He needed to dig down nearly 2 meters to reach his partners head. As he exposed more of his buried partner he tried pulling on his legs but couldn’t move him, so he continued to dig yelling at his friend to continue breathing. He exposed a hand, which was pale and grey. Finally, he reached his partners face and cleared the snow from around his face with his hands. Clearing his airway, his partner regained consciousness.

The two assessed the situation. Both had lost their skis and poles. The skier that triggered the avalanche was uninjured. The other was buried for approximately 20minutes, was unconscious for a portion of that time and was coughing up blood. He had cuts on his shoulder, face and legs from being dug out. Both were wet and cold, and becoming hypothermic. At 15:50hrs they called Glacier National Park Visitor Safety Specialists reporting the incident and requesting rescue.

Two Visitor Safety Specialists responded via helicopter. On the reconnaissance flight they observed numerous large avalanches in the area that resulted from solar warming. The victims were waiting on a bench below the avalanche site; a reasonable landing site for the helicopter. The slope immediately above had already avalanched but the slopes on Sir Donald hung overhead, exposed to direct sunshine. The Visitor Safety Specialists decided to land adjacent to the party, perform a quick assessment and load them into the helicopter as quickly as possible to reduce exposure to the overhead hazard. The patient was then transferred to an ambulance back at the staging area in Rogers Pass. In the end, the buried victim suffered only minor injuries. 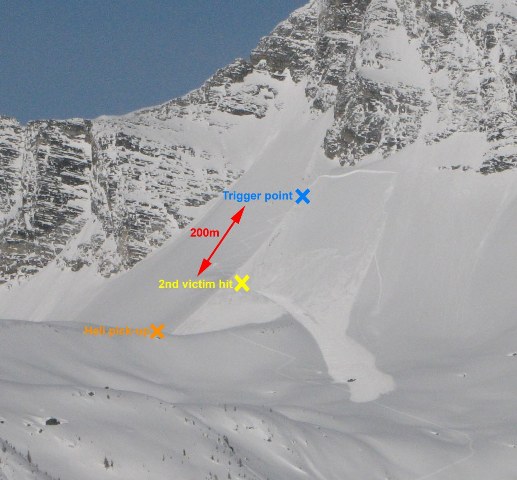 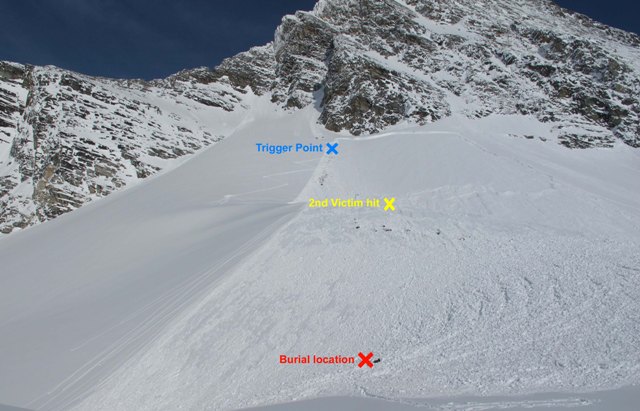 
Analysis
The group was very experienced. The objective chosen was challenging: it involved climbing a steep, cross-loaded west facing slope, with avalanche danger rated as Considerable in the Alpine, and with forecasted strong solar warming. They were aware of the risks they were taking, basing their decisions on information gathered during their ascent, and taking precautions to try to mitigate risks by spacing out. However, other than changing their objective, there was no way to avoid the risk entirely. Two factors were critical in the positive outcome of this accident:
1) The individual left on the surface quickly initiated a companion rescue, recognising that the first priority was digging out his partner as quickly as possible.
2) They were prepared with means to communicate and able to contact Parks Canada’s Visitor Safety Specialists to initiate a rescue.