At approximately 1430, in the Helen Lakes drainage at about 2400 m, two friends were telemarking down the slope when the first friend caught his trailing ski in the snow and it twisted. He heard a pop, had immediate pain in his ankle, and could no longer bear weight. The second friend skied out and notified Visitor Safety from the Lake Louise information center.

At 1600, the uninjured friend spoke with a Parks Canada Visitor Safety Specialist, and relayed that his friend had hurt his ankle approx 3 km up Helen Lake basin. He had several jackets and good clothing with him to stay warm. The Visitor Safety Specialist arranged a helicopter and departed the Banff Warden Office with two Visitor Safety Technicians, heli-sling rescue equipment, medical supplies, and ground evacuation equipment. At 1718, they were able to land near the injured friend, and he was loaded into the helicopter and flown back to the Lake Louise Warden Office and then to the Banff hospital.

The patient had good sensation and circulation in his injured foot. The mechanism of injury was a high speed twisting fall to the ankle. The ankle was not splinted due to a lack of daylight and flying time issues. The patient went into surgery the next day and got 7 screws into his tibia and ankle area and also had torn some ligaments. Leg injuries from skiing are fairly common, but this accident could have been made much worse if the party was not well prepared with warm clothing and food. If the party had carried some sort of emergency communication device, they could have been rescued a lot sooner.

A party of two was ski touring up the Emerald Lake slide path. Three other parties were following this group and the total number of people in the slide path was twelve. A size 3 avalanche released and caught the first two skiers just above the obvious bench at about mid height. The two skiers were partly buried and injured. The other groups skied up to the partly buried skiers, helped dig them out, administered first aid, and moved them to the side of the slide path. Two skiers in the group descended to Emerald Lake Lodge to call Banff Dispatch. 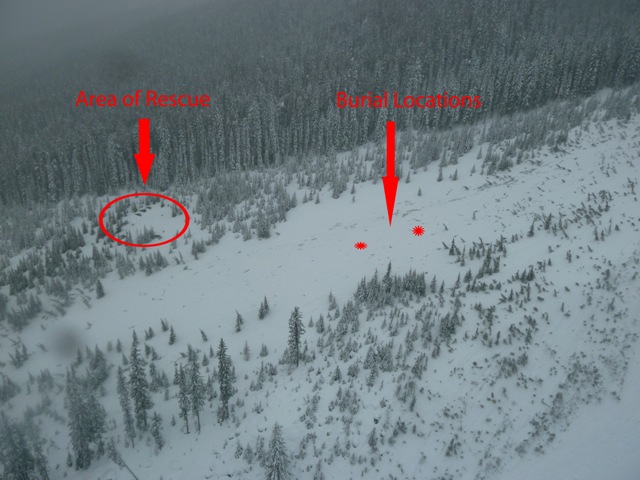 Two Visitor Safety Specialists were dispatched from Banff via helicopter. Two other Visitor Safety Specialists were dispatched via ground from Lake Louise. The Parks Canada dog master was dispatched from Banff via ground. The team dispatched from Banff came on in poor weather, but after careful deliberation it was decided to drop one rescuer by toeing the helicopter in close proximity to the injured party. After the rescuer was dropped off the helicopter was forced to shut down at a staging area near Emerald Lake. The rescuer on scene assessed the patients and noted that they could be transported inside the helicopter. With the help of the group the rescuer cut down trees and prepared a helipad. When the flying weather improved a second rescuer went up in the back of the helicopter with the first rescuers skis and pack in the back seat. The helicopter toed in once again, and the rescuer inside the helicopter passed the passed the primary rescuers gear out to him, and then the two patients got in, and flew back to staging. The first rescuer then skied back to staging with the remainder of the group. At approximately 10pm a secondary size 4 avalanche obliterated the rescue area and put debris across the lake and broke the ice. 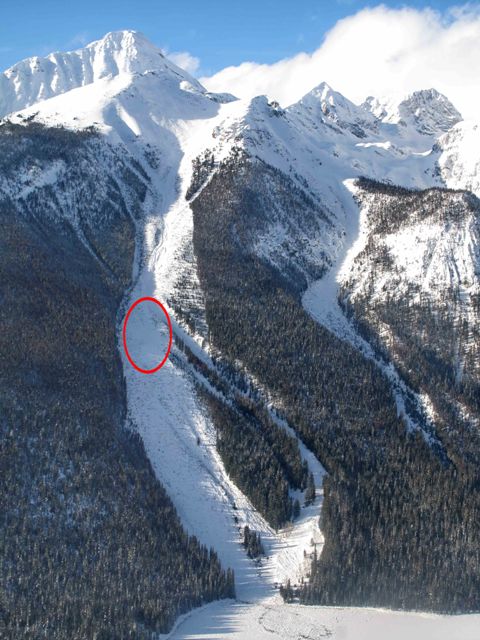 Emerald Lake slide path with circle showing the location of the burial from
the first size 3 avalanche. Note the broken ice on the lake from the second
size 4 avalanche © Parks Canada

Many of the people involved were asking about how they rationalized their decision to go to the Emerald Lake slide path that day. The winter of 2010/2011 was full of surprises. Climax avalanches had been running to the historical run outs well after storm cycles had passed through. In this particular case the avalanche danger for the area was rated at considerable, but, the slide path had not run in any previous cycle. In conditions like this it is important for people to determine whether or not the slide path had run in a previous cycle or not. Looking for clues like piles of debris, broken timber, and fracture lines are obvious clues. If it seems more subtle than that, try and ask locals or professional forecasters to see if they have any specific knowledge or data on particular features.