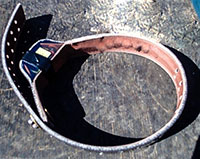 Objective: Researchers hope to maintain 10 to 12 GPS radio-collared grizzly bears in Banff and Yoho national parks over the course of this project. GPS radio collars provide insight into animal movement, habitat use patterns, and preferred habitat selection. In particular, researchers want to know where, when, and why grizzly bears use the railroad tracks, roads, and other disturbed areas.

Parks Canada will also use collar data to assess the likelihood of impacts from future development proposals upon the grizzly bear population, and to evaluate if mitigation and restoration actions have been effective at improving grizzly bear habitat.

Did you know? Most of our collars collect GPS locations and transmit data through the Iridium satellite network. There is usually a one to three day delay in data transmission. Balancing battery life with sufficient data transmission can be a challenge, so most collars are programmed to record a GPS location every two hours.

Environmental and Railway Factors and Mitigations for Rail-related Bear Mortality 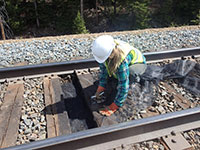 Objectives: To better understand what factors may affect grizzly bear mortality along the railway, this project is addressing four main objectives:

Update 2014: Researchers have shared some of their initial findings: 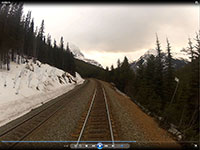 Bears exhibit a variety of responses to trains. For example, some bears leave the railroad tracks when they first see a train, others leave the tracks at the last minute, and some, when startled by trains, flee down the tracks.

Fire has the potential to create habitat © Parks Canada

Grizzly bears in Banff National Park have some of the lowest reproductive rates in North America relative to other grizzly bear populations because of low quality habitat; nearly 50% of the mountain national parks are composed of rock and ice. As a result, bears are known to forage on or near the railroad when few high quality natural foods are available elsewhere.

Objective: Fire (natural and prescribed burns) and forest thinning have potential to create high quality habitat that could draw bears away from the railroad tracks. This project looks at how the following disturbance agents and landscape factors influence the amount and quality of grizzly bear foods: 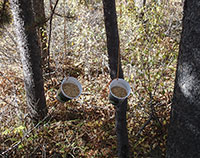 Objective: To identify a low-cost method to discourage bears from feeding on grain by creating a negative experience when they do it. In this case grain was systematically combined with Thiabendazol, a fungicide/parasitide which induces feelings of nausea. Once the treated grain was made available, researchers assessed whether bears decreased the amount of grain they consumed, and therefore spent less time on the railway.

Results: Completed in 2012 in Mount Revelstoke and Glacier national parks, results found that bears could differentiate between treated and untreated samples of grain, so Thiabendazol was not effective at creating an aversion to grain.

Objective: This project aims to test the effectiveness of technologies that would deter wildlife from entering a fenced-in corridor and is being tested away from the railway for safety reasons.

What’s being tested? Electrified mats are mats made of rubber embedded with metal bars or wire capable of carrying an electrical current. Designed to deliver an uncomfortable sensation upon contact, the mats use low amperage current to minimize the potential harmful effects on wildlife and people. Combined with electrified fencing, these mitigations are being tested at safe, remote locations that can inform researchers whether this might be a potential solution in the future.

This research project is testing electrified mats at two off-site locations in Banff and Yoho national parks. At these sites, Canadian Pacific collaborated with Parks Canada to build a 10 meter imitation section of railroad that enters a fenced enclosure. Bait placed within the enclosure provides a strong attraction for bears and other carnivores to cross the electrified mat. Remote cameras record animal responses and can inform the potential successes and limitations of this technology.

Update 2014: A mock section of fenced rail line was built so researchers could test the effectiveness of electrified mats combined with electric fencing. Testing occurred in three phases:

It is hoped that by adding deterrents like electric fencing, the enclosure will completely exclude bears and other wildlife from high risk areas on the railway tracks.

Next Steps: Next phases of this project will further evaluate the effectiveness of electrified mats in winter conditions when snow is continually removed through a heat source.

Did you know? Electricity used to power the electrified mats, the electric fencing and the monitoring cameras is provided through solar power.