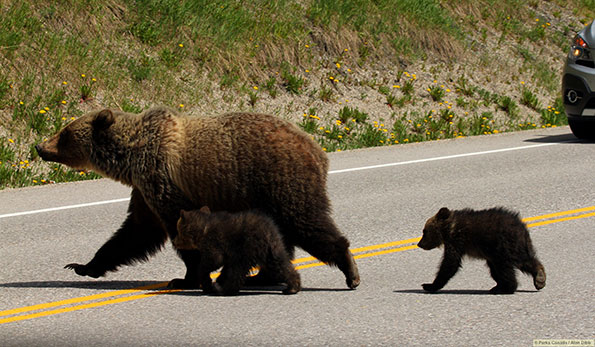 Bears need to move! Within their home ranges, grizzly bears seek out seasonal foods, mates, den sites, travel routes and female bears may also be trying to raise cubs. Human use in prime habitat can complicate how bears make a living.

Like all species, bears need habitat that provides for their daily and seasonal needs. Within their home ranges, grizzly bears seek out seasonal foods, mates, den sites, and travel routes. Females need secure areas to give birth and raise offspring. Within the mountain park landscape, suitable available habitat is hard to find. The best quality habitat for bears and other wildlife is along major valley bottoms; often where humans and associated development can be found. Human use in prime habitat complicates how bears make a living.

In recent years, the railway has been identified as one of the largest sources of human-caused grizzly bear mortality in Banff and Yoho national parks, the railway is a challenge that is being addressed through a five-year Joint Action Plan initiated between Parks Canada and Canadian Pacific Railway. This initiative is an important step towards building mutual understanding and exploring science-based solutions.

In 2010, Canadian Pacific and Parks Canada signed a five-year Joint Action Plan aimed at reducing grizzly bear mortality on the rail line in Banff and Yoho national parks. This includes a $1 million grant from CP to support research to improve our understanding of the causes of bear-train collisions. This research will help identify potential solutions to reduce grizzly bear mortality along the rail line.

After a rigorous review of research proposals, research teams from the University of Alberta and the University of Calgary, supported by experts from Parks Canada and Canadian Pacific, have been conducting the following research projects that will help inform short and long-term solutions to reduce grizzly bear-train collisions.

Over the years, Canadian Pacific has worked to reduce bear mortality on the rail lines in Banff and Yoho national parks.

Actions to reduce bear-train collisions include testing of bells, lights and horns by train crews, trains whistling in high-risk areas, and the use of on-board locomotive camera systems that record near-miss and collision events to help researchers determine what might reduce these. 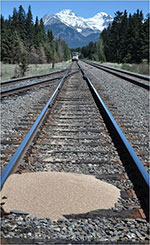 
In Harm’s Way: What Attracts Bears to the Tracks?

For grizzly bears to meet their needs for food, space, and mates, they are often on the move, using all available habitat, including places used by humans. So what is it about the railroad tracks that is so appealing to bears?

Why do bears stay in harm’s way when trains approach?

This is one of the questions being addressed by research. What we do know is that in addition to attractants, site characteristics (such as curving tracks, raised tracks, surrounding landscape features, vegetation features, and train speed, and even a bear’s physiology) may affect a bear’s ability to detect oncoming trains and successfully escape. 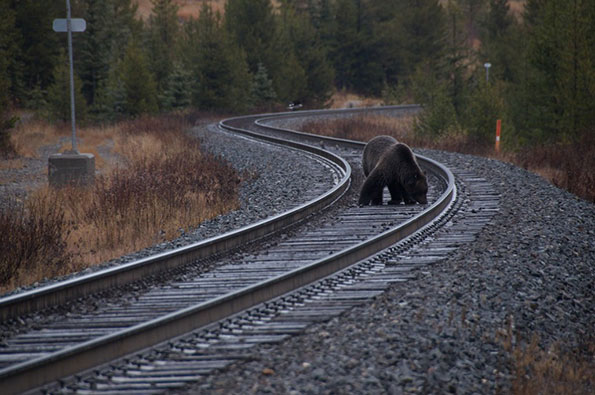 The relationship between bears and the railway is complex. Despite the potential risk, the railway can provide sources of food and an efficient corridor for bears to travel throughout their extensive ranges.