Bats in the mountain national parks 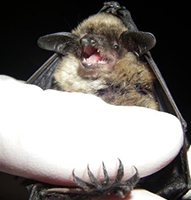 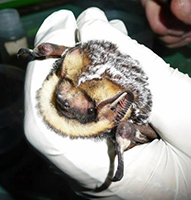 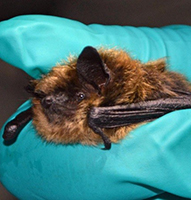 Bats comprise one-quarter of the world’s known mammal species and are an important part of a forest’s ecology. All the bats native to Canada are insect-eaters and typically devour half their weight in insects during a single night of hunting for food. Their worldwide value as a natural form of pest control for agriculture and forestry is estimated in the billions of dollars. We can also thank bats for limiting the number of mosquitoes.

The bats in Canada need our help. While there are more than 1,000 species of bats on Earth, only seventeen species are regularly seen in Canada. The health and numbers of several bat species in North America are being compromised by a relatively new disease called white-nose syndrome, which could have catastrophic consequences for at least three Canadian species if no action is taken.

What you can do

White-nose syndrome poses no danger to humans, but people entering areas where bats may be hibernating can unknowingly spread spores from the fungus that are on their clothing, footwear or pets to new areas. 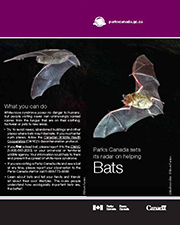 Learn more about bats by reading below and then tell your family and friends all about their cool lifestyles. The more people who understand how ecologically important bats are, the better!

What is White-nose Syndrome?

White-nose syndrome is a fungal disease which affects hibernating bats. The fungus grows on bats while they hibernate in caves and abandoned mines, and once it occurs, can cause over 90% mortality in a population. It does this by causing bats to awaken more frequently from hibernation and earlier than they should. This leads to depletion of their winter fat stores and also prompts them to leave their hibernation sites early.

Since 2006, white-nose syndrome has caused rapid declines in bat populations across Eastern North America. White-Nose Syndrome has killed at least 5.7 million bats since it was discovered in a single cave in New York in 2006. Because of these precipitous declines, three species of bats were listed as endangered under Canada’s Species at Risk Act in December 2014: the little brown myotis, the northern myotis and the tri-coloured bat.

White-nose syndrome was detected in 2016 near Seattle in Washington State, USA. Parks Canada has been preparing for White-nose syndrome through research and monitoring efforts to figure out where the bat population hot spots are and how they’re doing, through implementing appropriate cave access and White-nose syndrome decontamination protocols, and by protecting bat habitat.

In 2015, Parks Canada in collaboration with the Canadian Wildlife Health Cooperative produced an educational video to prevent the spread of White-nose syndrome in Canada. This video presents the best decontamination techniques to curb the spread of the fungus causing white-nose syndrome. It demonstrates how to use the national decontamination protocol developed by the Canadian Wildlife Health Cooperative. The video, “Canadian National White-nose Decontamination Protocol”, is available on Youtube.

Watch Bats and White-Nose Syndrome in HD on YouTube

Parks Canada is a recognized world leader in conservation. Through its Conservation and Restoration Program, Parks Canada takes actions to preserve national parks and contribute to the recovery of species at risk, including bats. Parks Canada recognizes that bats play an important role in the ecosystem and is working to increase knowledge about bats in the mountain national parks to better protect them.

Within the mountain national parks (Mount Revelstoke, Glacier, Banff, Yoho, Kootenay, Jasper, and Waterton Lakes national parks), Parks Canada is taking proactive measures against white-nose syndrome by conducting research to confirm which species of bats live in the mountain parks and to understand the distribution of bats, their movements, and where they hibernate. We also participate on the national recovery team that is developing a recovery strategy for the three listed endangered bat species.

Parks Canada staff use roost loggers and acoustic monitors that record bat calls not detectable to the human ear to confirm bat activity and identify different bat species. In some parks, a fine mesh is suspended between two poles (known as a mist net), these are used to safely capture bats in order to confirm the species identification. Parks Canada takes the protection of bat species very seriously and this research will also determine critical bat habitat within the mountain parks to ensure the best possible protection and management of bat species in the mountain parks.

Parks Canada developed its own bat monitoring protocol consistent with the North American Bat Monitoring Program. We are working closely with Environment Canada and other partners to ensure that the information we gather contributes to larger conservation initiatives and the recovery of endangered bat species. 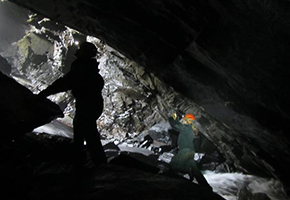 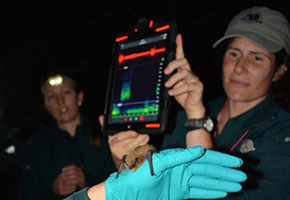 Historically, little was known about bat activity in Mount Revelstoke and Glacier national parks. Former investigations of the Nakimu caves in Glacier National Park centered on the geology and physical features of the caves, not on how wildlife, like bats, might use them. Biological surveys done in 1976 concluded that there were “no delicate biological systems” in the caves. A three-day visual survey in the 1970’s to look for evidence of bats in winter was undertaken – this survey did not produce any evidence of bat activity, but suggested further studies at one of the caves. With the threat of white-nose syndrome moving westward and no baseline data on if and how bats might use the Nakimu Caves, Parks Canada initiated a project to support bat conservation in 2013. The project goal is to understand bat presence in the caves, record the different species that may be present, and the timing of use (i.e are the caves used for bats to overwinter).

For 18 months in 2013 and 2014, acoustic recording devices as well as temperature and relative humidity loggers were left in several locations in the Nakimu Caves. These devices collected cave climate data and all sounds, including bat calls. The recordings provided information about the species of bats present and when they used the caves. Soil samples were collected from the caves and analysed. Results showed no sign of WNS. The data collected during this 18 month study establishes baseline data on conditions in the Nakimu Caves and is contributing to the larger understanding of the distribution of bats, their movements, and where they hibernate. This information is essential as we strive to take preventative actions against the spread of white-nose syndrome.

In order to have a visual confirmation of bats, researchers set up mist nets and captured several little brown bats in 2015. The bats were quickly examined, DNA and other data collected and they were released back into the wild.

Research results indicate that Mount Revelstoke and Glacier national parks are home to approximately nine bat species including the little brown and northern bat, both species at risk. At Nakimu Caves we identified 65% of the bats recorded as little brown bats. Bat activity in the caves was highest between late July and mid-September. Patterns of activity suggest bats use the caves as a swarming site and potentially for hibernation.

Next steps for the researchers include additional mist netting to confirm resident bat species and monitoring bat calls to establish if the Nakimu Caves are a location used by bats for hibernating (known as a hibernaculum). 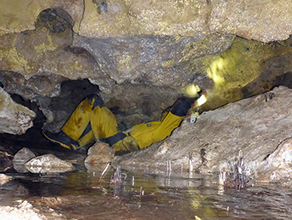 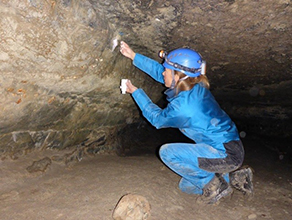 Little is known about bats in Banff, Yoho or Kootenay national parks but there is evidence of seven species, including the endangered little brown bat.

Parks Canada is doing research to confirm which species live here, where they live and how many there are:

Parks Canada is collaborating with Alberta Environment and Parks to perform a survey of bats in Jasper National Park as part of the North American Bat Monitoring Program. Research indicates that Jasper is home to approximately eight bat species including the hoary bat (largest of all Canadian bats), as well as the little brown and northern bat (both species at risk).

A live bat cam, installed by Parks Canada at a known roost site at the Palisades Stewardship Education Centre, provides approximately 1,900 youth each year with the opportunity to learn about the secret lives of bats. Jasper townsite is also a busy place for bats. Parks Canada installed a bat call recorder (acoustic monitor) in a local backyard garden one night, where bat activity was so frequent, the memory card ran out of space before morning. Bat calls from seven of Jasper’s eight bat species were recorded!

Prior to bat research taking place in Waterton Lakes National Park, researchers thought five bat species lived in the park. Mist-netting and acoustic surveys, conducted during an international partnership with Glacier National Park in Montana, increased the count to eight species. The two-year study took place between 2011 and 2012 and revealed that Waterton Lakes is a significant migration route for tree roosting bat species such as silver-haired bats, eastern red bats and hoary bats. The bats use major waterways in the parks like highways. At times researchers were logging hundreds of bats flying overhead. Scientists also confirmed the endangered little brown bat was living in a built up area of the park and installed bat houses as an alternative habitat for the species. Parks Canada continues to build upon its knowledge of how bats use habitat in Waterton Lakes National Park and contributes information from a park-wide bat monitoring project to the North American Bat Monitoring Program database.