Polar bears are the largest land carnivore in North America. An adult male typically weighs 300 to 450 kilograms, stretching three metres from nose to tail. They are strong, fast, agile on land or ice and are expert swimmers and divers. Their sense of smell is exceptional, and their eyesight comparable to a human’s. Polar bears are naturally curious, but not fearless as they have been labelled. They are shy and prefer to avoid confrontations with humans and other polar bears. Their primary prey is the ringed seal but they will also prey on birds, eggs, small mammals and even humans. They also scavenge anything from beached whales to human garbage. In the heat of summer, polar bears may appear slow and docile, but they are capable of moving swiftly and with purpose.

Before your trip, discuss possible plans of action for dealing with bears in a variety of circumstances and be sure everyone understands. The actions of each individual either contribute to or detract from the safety of everyone else.

Every attack or encounter is different. To find out more about bear behaviour, hire a guide or talk to knowledgeable people in the community.

If a bear does not know you are there:

If a bear knows you are there and shows signs of being curious, such as:

If the bear has been surprised at close range or shows signs of being agitated or threatened, such as:

If the bear shows signs of stalking or hunting you, such as:

If a bear charges: 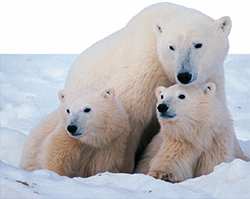 Never get between a bear and her cubs.
© Wayne Lynch

Never get between a bear and her cubs.

If a female with cubs is surprised at close range or separated from her cubs she will likely attack to defend her cubs.

Always leave an escape route for the bear.

Carry deterrents and know how to use them.

Reducing the threat posed by a polar bear during an interaction may be difficult. Non-lethal deterrents cannot be depended on to ensure safety. The best way to live safely with bears is to avoid contact with them.

Any potential weapon must be considered, such as skis, poles, rocks, blocks of ice or even knives.

Stay together as a group. This can be a deterrent and actions, such as making noise, jumping, waving arms, throwing things, may help to drive a polar bear away.