Why a national park here? - The landscape and the people 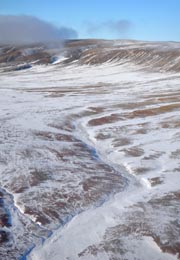 Some areas on Bathurst Island are key habitat for Peary caribou.

The proposal to establish Qausuittuq National Park is part of Parks Canada’s goal to complete Canada’s National Parks System Plan.  The plan divides Canada into 39 natural regions, ten of which are found either partly or completely within Nunavut.  The goal is to establish one park in each of these natural regions and northern Bathurst Island has been identified as having representative characteristics of the Western High Arctic Natural Region.

The dramatic landscape of Bathurst Island also holds natural and cultural importance.  The proposed national park will encompass key wildlife habitat including, in particular, travel routes, calving grounds and wintering grounds for Peary caribou, which were listed as endangered under Canada’s Species at Risk Act in 2011. 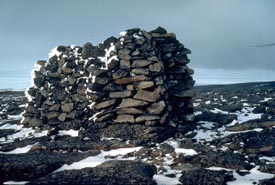 Impressive in size and construction, this cairn on Helena Island, within the proposed Bathurst Island National Park , was built in 1853 by one of the British Naval Franklin search expeditions.

Archaeological studies in the Bathurst Island complex indicate occasional human use over the past 4500 years.  Both prehistoric as well as historic Dorset and Thule Inuit cultures are known to have been present in the area.  Human presence fluctuated with changes in climate, ice cover and the corresponding availability of wildlife for subsistence.

The community of Resolute, located on Cornwallis Island to the southeast of the proposed national park, was established in 1953 and Inuit from the community still travel the land and waters of the Bathurst Island area to hunt, fish and trap.