Background - The story so far 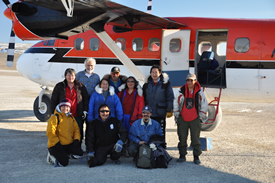 Resolute community members and Parks Canada official participated in a field trip to the proposed national park on Bathurst Island in September 2010. 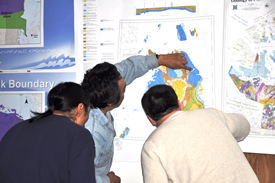 1994 | The national park proposal on Bathurst Island is first discussed with the Resolute Hunters and Trappers Organization.

1995 | A number of park feasibility studies about the Bathurst Island area begin in 1995 and conclude in 2001. The studies look at mineral and energy resources, archaeology, wildlife and traditional knowledge.

2002 | The Government of Canada proposes a park boundary for negotiation with
Inuit.  | Further progress on establishing this proposed national park was delayed for several years for a range of reasons unrelated to the national park itself.

2009 | The  Qikiqtani Inuit Association (QIA) and Parks Canada resume work on the national park proposal.  The QIA is the organization designated to negotiate an Inuit Impact and Benefit Agreement (IIBA) and a park boundary on behalf of the Inuit of the Qikiqtaluuk (Baffin) Region of Nunavut.

2010 | Negotiation of an IIBA between Parks Canada and QIA begins in Iqaluit.  |  Parks Canada holds community information sessions in Resolute and organizes a field trip for community members to Bathurst Island.

2017 | In August, the minister responsible for Parks Canada officially opens Qausuittuq National Park at a ceremony in Resolute, Nunavut. .