Lake O’Hara is a collection of exquisite lakes and hanging valleys linked by a well-marked and well-maintained trail network. These are the most popular and they are all spectacular. Strong hikers may wish to combine more than one of these trails using alpine routes:

Length : 2.8 km circuit
Elevation gain : minor up and down

From the O'Hara Warden Cabin, go east across a bridge over Cataract Brook, and follow the north shore of the lake past the start of the Wiwaxy Gap/Huber Ledges Alpine Route on the left. Continue along a steep hillside and across several gullies above the lake. At the eastern end of the lake, the trail passes the Lake Oesa Trail junction before passing below a huge outcropping of pink quartzite and Seven Veils Falls.

The trail begins on the Lake O'Hara Shoreline Trail near the eastern end of the lake and ascends a number of switchbacks to the top of a cliff at the end of the lake. Above the cliff, cross wide talus and scree slopes swept clear by avalanches every year. After passing through a stunted forest, climb over several steep, rocky outcrops on stone steps built by Lawrence Grassi. Just past the top of the steps is the trailhead for the Yukness Ledge Alpine Route, and Lake Victoria.

The Lake Oesa Trail continues from this junction through delicate meadows enclosed by copper-coloured quartzite cliffs and at several points along the way, tiny pools of Oesa Creek are visible below to the right. Finally, after climbing to the top of a short grassy slope, the trail passes through a trough cut in solid bedrock to the tilted rock slabs which contain Lake Oesa. The Wiwaxy Gap/Huber Ledges Alpine Route joins the trail from the north just before the lake.

Opabin Plateau is a beautiful hanging valley atop a rocky headband cliff above Lake O'Hara. West Opabin Trail and East Opabin Trail climb to the head of the valley from both sides of the cliff. By starting up either of these arms of the circuit and returning via the other, a tour of the valley can be made.

Via West Opabin: A sign on the southwest end of Lake O'Hara marks the beginning of the west arm of Opabin Plateau Circuit. The trails climbs quickly to Mary Lake, follows the shore and then climbs steeply up an open talus slope for approximately 120 vertical metres until it mounts a grassy cleft onto the rolling terrain of Opabin Plateau. At this point, the All Soul's Prospect Alpine Route joins the circuit from the west. Another small path travels east back out to the head of the cliff, a point called Opabin Prospect.

The Opabin Plateau Circuit continues into the little valley of Opabin Creek. It crosses a bridge over the creek and travels upstream, passing southwest of Hungabee Lake. Climbing over a knoll through more talus, the circuit arrives at Opabin Lake. A glacier about 800 metres long lies at the foot of Opabin Pass - the narrow gap in the peaks at the end of the lake. Hikers are warned to stay off the glacier because of dangerous crevasses.
Opabin Plateau Highline connects East Opabin and West Opabin trails on the plateau.

The return arm of the circuit begins on the east shore of Opabin Lake. The trail descends back along the plateau past Hungabee Lake and follows the foot of the slope of Yukness Mountain, where the Yukness Ledge Alpine Route to Lake Oesa begins. Continue through grassy meadows back to the brink of the valley and a 0.8 km series of switchbacks that drop to the shores of Lake O'Hara.

The trail begins at Le Relais Day Shelter and heads west, bearing right at the junction of the Big Larch Trail which is part of the return arm of this circuit. Past the junction, the circuit then enters an alpine meadow where the Elizabeth Parker Hut and the junction of the Linda Lake Circuit are located. The Lake McArthur circuit travels southwest, climbing through larch forests for 800 metres before encountering a junction with the south end of the Big Larch Trail. The trail then crosses a bridge over Schäffer Creek and a short distance further, encounters a junction with the Lake McArthur Trail which leads off to the south.

Return to Schäffer Lake on the McArthur Highline Trail. At the end of the bridge across Schäffer Creek, follow the Big Larch Trail. Just east of the junction, the All Soul's Prospect Alpine Route heads off the circuit to the south. The circuit continues its return by traveling northeast beyond the junction, descends steeply to the Devil's Rockpile and then levels off in the alpine meadow and the trail back to Le Relais.

From the Elizabeth Parker Hut, the trail passes through the meadow and enters the forest. It maintains its level through the forest and after 1.6 kilometres, rounds the end of a long ridge separating the O'Hara valley from Duchesnay Basin. The trail travels a short distance to a junction with a cut-off trail leading north past Lower Morning Glory Lake and a short return to the campground.

The Linda Lake Beeline continues northwest and climbs steeply for the next 300 metres. Linda Lake is at the top of the slope. To complete the round trip, continue around the west end of the lake, where the Duchesnay Basin Trail heads west. The circuit continues along the shoreline of Linda Lake to a junction with the Linda Lake Trail, the first leg of the return portion of the circuit. Descend gradual switchbacks to a junction with the Lower Morning Glory Trail or continue on the trail, which ends at the Lake O'Hara campground.

Beginning at the west end of Linda Lake, the trail climbs gently through several meadows heading northwest for about 1.1 km to Cathedral Lakes. The northeast ridge of Odaray Mountain, a 900 metre rock buttress, towers over the south side of Duchesnay Valley.

Crossing a bridge over the lake's outlet, Vera Lake can be seen downstream. Most of the lakes in the area are known as kettle ponds and were formed after chunks of glacial ice melted, leaving poorly drained depressions in the glacial debris.

Follow the north shore of Cathedral Lake for 50 metres, then climb along a creek before crossing into the woods on the left. Following a wet meadow, the trail ascends a small hill and comes to an end as it encounters the Cathedral Basin Alpine Route branching sharply to the right.

Produced in partnership between Parks Canada and the Lake O'Hara Trails Club, a non-profit group dedicated to maintaining the integrity of this area.

There are five alpine routes above the O'Hara basin for experienced hikers who are comfortable with route finding, heights and traversing exposed terrain. 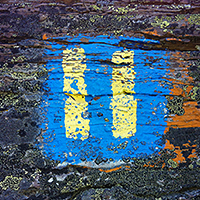 Alpine routes are often shown by cairns, and may involve scrambling on scree slopes or over boulder fields where the way is marked by painted blue and yellow symbols. Expect early season closures on the alpine routes due to avalanche hazard. Hikers must be aware of avalanche conditions year round and follow protocols for travelling in avalanche terrain.

*Note: A voluntary program is in place to limit use of the Odaray Highline Trail which provides access to this route. Please hike other trails first to help protect a vital wildlife corridor.

Animals use river valleys and mountain passes to cross from the western to the eastern slopes of the Rockies. Lake O’Hara’s McArthur Valley - Cataract Brook Wildlife Corridor is part of an established, regional network of corridors used by wildlife. This corridor and others like it sustain healthy animal gene pools and access to important seasonal habitat.

There are three closures in place in the Lake O’Hara area to reduce disturbances to wildlife using the corridor.

After August 15th, when seasonal plant foods for grizzlies have peaked, McArthur Valley is opened annually to two groups per week. A McArthur Valley hiking permit is required to hike this unmaintained wilderness route and can be obtained by phoning the Yoho Visitor Centre.

Adjacent to McArthur Valley and contributing to the corridor is the Odaray Plateau. Habitat here is used seasonally by several species, including grizzly bears and mountain goats. The plateau is closed in summer to protect habitat and to limit disturbance in the wildlife corridor.

The Odaray Highline Trail cuts across the McArthur Valley-Cataract Brook Wildlife Corridor at its narrowest point – McArthur Pass. High human use here discourages and may stop animals from using the corridor.

Why are these measures in place?

Serious conflicts between people and grizzly bears on the Odaray Plateau and in the McArthur Valley prompted Parks Canada to restrict access to these areas in 1993. Concerns for both public safety and the viability of local grizzly bear populations led to a five-year study of how people and wildlife use this area.

Research identified key grizzly bear habitat here and the existence of a well-travelled wildlife corridor. To prevent future conflicts and protect these important ecological areas Parks Canada implemented trail closures and restrictions and rerouted short trail sections in McArthur Pass. Public cooperation has contributed significantly to the success of these measures for bears and people. Thank you.