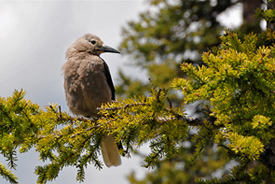 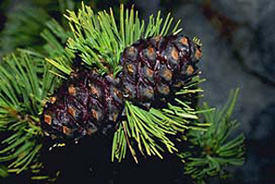 Whitebark pine is easily recognized by its needles, which grow in bundles of five, and its large cones.
© Parks Canada

The whitebark pine has evolved over time to become an important tree of the high elevation forests along the Rocky and Columbia Mountain chains. It is found in seven of Canada’s national parks: Mount Revelstoke, Glacier, Jasper, Banff, Kootenay, Yoho and Waterton Lakes.

As hardy as the whitebark pine is, it is declining throughout its range, including within the mountain national parks. Its survival has been threatened by the combined effects of fire suppression, mountain pine beetle outbreaks and a disease known as white pine blister rust. As a result, whitebark pine is now listed as endangered by COSEWIC, the Committee on the Status of Endangered Wildlife in Canada.

Whitebark pine seeds are large (about the size of a pea) and high in protein. Several wildlife species rely on the seeds as favoured food, notably the Clark’s nutcracker, but also the red squirrel, grizzly and black bear.

Whitebark pine cones do not open on their own for seed dispersal. Instead, Clark’s nutcrackers use their long, pointed beaks to break apart the large cones and remove the seeds. The birds cache the seeds just under the soil surface to ensure a reliable source of food for winter. They use adjacent rock and wood debris to create memory maps that assist them in relocating the seeds when needed. Roughly half the seeds are overlooked and many of these germinate and grow into pine seedlings.

Whitebark pines are one of the first trees to establish after a fire. As the forest regenerates, other tree species may eventually shade out this sun-loving species, so natural disturbances can reset the successional clock to favour both the Clark’s nutcracker and the whitebark pine. Fires create openings in the forest canopy and nutrient-rich seed beds, which attract nutcrackers as ideal areas for seed storage. These conditions give the whitebarks a competitive edge over other cone-bearing trees in the subalpine, since nutcrackers stash seed.

Historically, subalpine forests burned every 90 to 300 years. Most fires were low intensity, small and patchy. They created open spaces suitable for the nutcracker and whitebark pine. Former fire suppression practices reduced the number of these important open spaces, hindering growth of new whitebark pines, and allowed older, even-aged lodgepole pine stands to prevail at lower elevations. In the absence of fire, these lodgepole pine stands are prone to epidemics of mountain pine beetle. As the pine beetle epidemic has intensified due to human influences, it has spread into the higher elevation whitebark pine stands.

In 1906, a shipment of white pine seedlings arrived in New York from Europe. The seedlings carried white pine blister rust to a continent where native pine trees have no natural resistance. A large percentage of North America’s five-needle pines have already died, and most of the survivors are infected. Less than 1% of all whitebark pines are rust resistant.

What Parks Canada is Doing

As the range of whitebark pine shrinks, it is important to create the best conditions for many new whitebark pines to grow. The more that grow, the more likely that some with rust resistance will survive and thrive. These would produce new pines with higher rates of rust resistance. 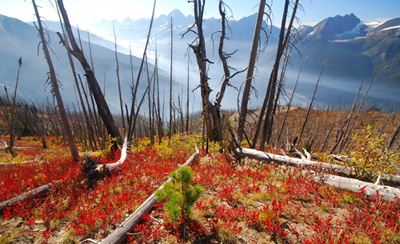