Mount Revelstoke National Park of Canada is home to many mammals including black bear, grizzly bear, mountain caribou, wolverine, mountain goat, moose, pine marten, coyote, a variety of bats, and several species of shrews, voles, and mice. Most of these animals are secretive and widely distributed, so that you would be very lucky to see one.

Mountain caribou are officially listed as "threatened" nationally and their numbers have decreased within the park in recent years. Black bears are commonly seen in spring at the base of Mount Revelstoke or along the Trans Canada Highway and Meadows-in-the-Sky Parkway. 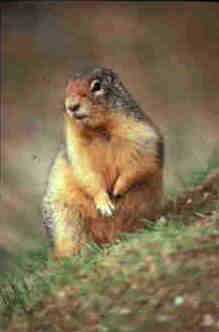 Columbian ground squirrels can be seen in the meadows at the summit of the mountain.
© Parks Canada / J. Woods 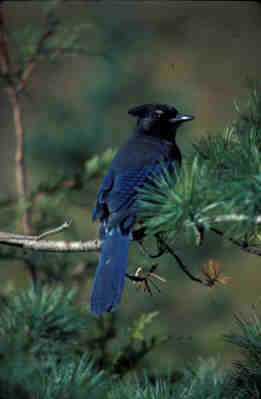 Columbia ground-squirrels are commonly seen at the summit of Mount Revelstoke during July and August. Hoary marmot and pika are commonly seen and heard in the summer on rocky slopes along the trails to Eva, Miller, and Upper Jade lakes. You will hear the scolding calls of American red squirrels along any trail through park forests all year. In winter, you will see the tracks of pine marten, snowshoe hare, and mule deer along the cross-country ski trails at the base of the mountain.

The park is well-known for its birdwatching opportunities. May and June are the best months for variety. July and August are the times to look for high-elevation specialists such as golden eagle, water pipit, and rosy finch. Following are some of the species you may see and some places to look for them:

For more information on the wildlife and ecology of Mount Revelstoke National Park, read our Natural Heritage page.