Pacific Rim National Park Reserve, nestled in the  ḥaḥuułi (traditional territories) of the Nuu-chah-nulth people, tells a story of those who have lived here for generations.

Nuu-chah-nulth, or “along the mountains and sea”, refers to the territories along the 300 km stretch of Vancouver Island’s west coast - from Brooks Peninsula in the north to Point-no-Point in the south, and to the Vancouver Island Range in the east.

The resources of this vast ocean and temperate rainforests have traditionally supported the social, cultural and economic well-being of the Nuu-chah-nulth people.

Each nation has its own birthplace and creation mythology. The oral traditions of the Nuu-chah-nulth tell of a people who have made their home here for centuries, of a people who were born from this very land.

Historically, the Nuu-chah-nulth were not united as one people but were divided into distinct family or local groups. Each group shared aspects of a language, tradition and culture centered around a ḥaw̓ił (hereditary chief) and lived off the resources that their ḥaḥuułi (traditional territories) provided them with.

Today, the Nuu-chah-nulth First Nations are composed of 14 individual nations. Each has an elected Chief and Council, as well as ḥaw̓iiḥ (hereditary chiefs) Their culture remains firmly rooted in the land and coastal waters of their ancestry.

The economic, spiritual and social connections to the rainforest, shoreline and ocean may have evolved, but they remain the cornerstones of this enduring west-coast culture.

The Nuu-chah-nulth First Nations consider the lands within Pacific Rim National Park Reserve as their traditional territory. Since 1995 the park has been working collaboratively with First Nation partners to achieve long-term conservation and sustainable use of natural and cultural resources within Pacific Rim National Park Reserve.  This partnership provides an enriched sense of place for visitors and the local communities. 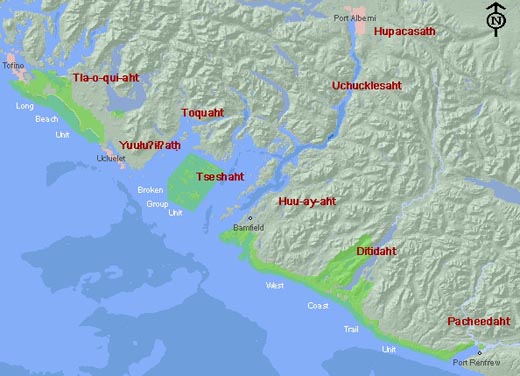 Our working relationships are guided by the Nuu-chah-nulth principles of Iisaak (respect) and Hishuk ish ts’awalk (everything is one), both of which are integral to the management and operations of the park.

The key objectives are to ensure:

DEFINITION: Cooperative management describes a management model under which Aboriginal groups work together with Parks Canada on the administration of its protected places.

These boards and working groups provide advice, guidance, support and recommendations to the park on topics, including resource management, visitor experience, planning and economic development. Strong working relationships help ensure mutual interests are respected and considered in decision and policy-making.

To meet legal requirements, Parks Canada will consult First Nations whose traditional territories lie within the Pacific Rim National Park Reserve and abide by current treaties and agreements. Research permits will only be issued once First Nation partners have been consulted.

NOTE: Please allow 30 to 90 days to process applications. Urgent applications may be refused due to inadequate time for the cooperative management process to be completed.

Through the collaborative efforts of Parks Canada staff and our nine Nuu-chah-nulth First Nation partners, we have accomplished the following: