Reducing wildlife-vehicle collisions while keeping habitat connected is a priority for Kootenay National Park. In 2013, 4.7 km of wildlife exclusion fencing and three underpass crossing structures were constructed. Over 10 km of additional fencing and six underpasses were built in 2015. 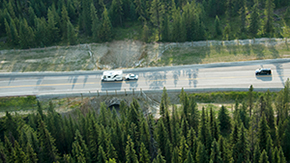 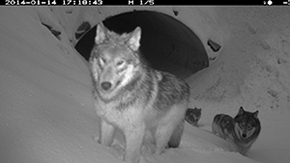 Left: Wildlife crossing structures, like this underpass, are designed to connect vital habitats and allow safe movement of animal populations across the highway. Right: This wolf pack has been using the new underpasses in Kootenay National Park.

Fencing and wildlife underpasses have been built near the Dolly Varden picnic site. This area was chosen because it has a high number of wildlife-vehicle collisions. White-tailed deer are involved in 75% of collisions. Elk, moose, wolves, fox and coyote have also been killed in this area.

The Kootenay National Park Wildlife Crossing project benefits from 20 years of research on fencing and crossing structures along the Trans-Canada Highway in Banff National Park. This research proves that vehicle-wildlife collisions can be dramatically reduced by blocking wildlife access to the highway and providing safe ways for them to cross. 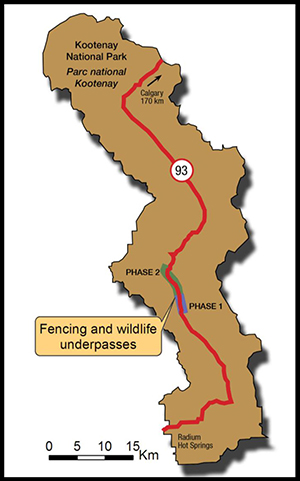 The wildlife fencing and underpasses are in a "hot spot" for wildlife-vehicle collisions on Highway 93 in Kootenay National Park.

The first phase of this project, implemented in 2013, included 4.7 km of wildlife exclusion fencing, one large elliptical and two smaller concrete box culvert underpasses. In 2015, the project’s second phase added over 10 km of fencing, one box underpass and five elliptical underpasses. Along the fence, animal jump-outs and gates for human access and wildlife management have been installed. At the ends of the fence boulders and concrete barriers have been placed to deter animals from entering the fenced area.

Parks Canada has implemented other measures to reduce road-related wildlife mortality, such as designing and deploying new wildlife crossing signs when animals are frequenting roadside areas, and using roadside light boards to warn drivers to slow down when wildlife is present.

Monitoring the effectiveness of the underpasses is underway. The first three structures have been used regularly by white-tailed deer, occasionally by wolves, and sporadically by moose, mule deer and black bear. Wildlife have begun adjusting to the fencing and structures. Parks Canada anticipates at least an 80% reduction of wildlife vehicle collisions in the 15 km of the combined project area.

The wildlife crossing project will also create improvements to visitor facilities. A new exhibit about wildlife crossing was installed in 2015 at the Radium Hot Springs pools. In 2016, extensive upgrades will be made to the Dolly Varden picnic site with installation of a new privy, picnic shelter and interpretive signs and activities.

Information and updates on the Wildlife Crossing Project in Kootenay National Park will be posted on the website: http://pc.gc.ca/hwy93S

A black bear crossing the road in Kootenay National Park