Living Landscapes of SG̱ang Gwaay: Strengthening the land and people in a changing climate

In the winter of 2018, a hurricane force windstorm event blew down over a hundred trees at SG̱ang Gwaay Llnagaay, a Haida Heritage Site, National Historic Site, and UNESCO World Heritage Site located along the remote southwest coast of Gwaii Haanas. This storm caused extensive damage to species at risk habitat as well as cultural features at the site, including standing poles, the remains of longhouses, and an old cultivation area. Massive tree roots were upended, which lifted ancient floorboards of longhouses and exposed invaluable cultural artifacts and seed banks. The blowdown damage provided an exciting opportunity to delve deeper into the history of the village, and to breathe Haida environmental and cultural stewardship into this landscape. 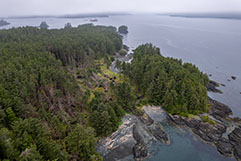 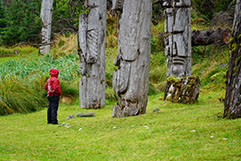 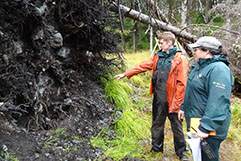 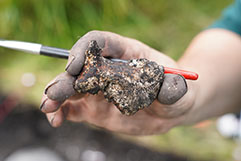 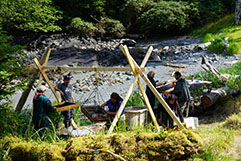 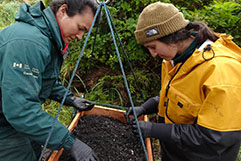 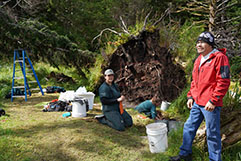 Immediately following the storm of 2018, a team of Gwaii Haanas staff along with a Parks Canada archaeologist visited the site to assess the damage, remove danger trees, and do emergency “rescue” archaeology of cultural features and artifacts. The exposed longhouse pits and surrounding ground offer a rare window into the cultural and ecological landscapes of SG̱ang Gwaay, shaped by more than 12,000 years of Haida resource use and management. Storm damage in and behind the village site. © Parks Canada, R. Gruys

In partnership with the Haida Gwaii Museum, the Gwaii Haanas team was successful in securing funds from the Nature Legacy program to undertake three years of archaeology and restoration work. The vision is to restore SG̱ang Gwaay in a way that is guided by Haida law, and in a way that enhances continued cultural use of the village. Restoration will honour and be guided by past use, while supporting present and future use by the Haida and visitors to Gwaii Haanas.

The objective of the project is to investigate the SG̱ang Gwaay village site and surrounding areas to gain a deeper understanding of Haida resource use and management over the last several thousand years. Archaeologists, along with staff from the Haida Gwaii Museum and Gwaii Haanas, are examining the ecological and cultural record of SG̱ang Gwaay to gain insight into climate change resilience of the land, sea, and people over deep time. This field work is guided by Haida staff, Haida Gwaii Watchmen and Haida cultural resource experts. The knowledge gained through this work will guide the longer-term goal of restoring SG̱ang Gwaay to a thriving eco-cultural landscape.

The 2021 field season focused on two ancient longhouse pits, of Naa G̱a Agang is Guuda People Wish to Be There (House 10) and Naa Gud Hiilangs Thunder Rolls Upon It (House 3). Excavation and mapping activities are taking place within the upended tree throw root balls. This opportunistic approach to archaeology is unique from conventional archaeology which excavates from the ground surface downwards. Excavating from below, ‘upwards’ towards the exposed house floor, allows the team to see the preserved underside of the wood floor boards and to see how artifacts were situated below and between the wood. The project team also did some preliminary testing on raised beach terraces, which were beaches during eras of higher sea levels. This yielded some subsurface artifacts and revealed a quartz rock quarry site, as well as a rock shelter area. The cultural and natural resources of SG̱ang Gwaay are susceptible to damage by introduced, invasive species as well as increasing climate change. Restoration activities will help address this damage. SG̱ang Gwaay is a significant breeding ground for several thousand pairs of seabirds including species at risk such as the Ancient Murrelet. It is also one of the few remaining invasive rat-free islands in Gwaii Haanas, and biosecurity measures will help to keep the island rat-free. The removal of invasive Sitka black-tailed deer will help native plants thrive and restore the forest vegetation understory. Restoration also includes looking to past environmental stewardship activities to develop strategies for mitigating the effects of climate change. For example, the project team will look at how to reduce wind throw of trees in the surrounding forest to prevent further damage to cultural features and species at risk habitat.

So far, thousands of artifacts have been uncovered at the site, including mammal bone tools, trade beads, buttons, metal fragments, a musket plate, as well as a beautiful argillite carving. Various seed concentrations were also revealed, and analysis is ongoing to identify all the plant material. Processing and analysis of artifacts is taking place at the Haida Gwaii Museum, which is the rightful home for Haida cultural artifacts. Archaeological field work will continue in the summers of 2022 and 2023, and restoration of house structures within the village will also take place in 2023. The Living Landscapes of SG̱ang Gwaay collection will be housed permanently at the Haida Gwaii Museum.

It takes many good people working together to steward a place as culturally rich and internationally renowned as SG̱ang Gwaay - collaborations and partnership are key to success. The Haida Nation, Government of Canada and the Haida Gwaii Museum are proud to work together to help restore SG̱ang Gwaay to a thriving eco-cultural landscape. These partners will draw on expertise from diverse knowledge holders including Haida Elders and Haida Gwaii Watchmen, and other experts from Laskeek Bay Conservation Society, Taan Forest, and Memorial University.

To learn more about this project please contact Nadine Wilson at nadine.wilson@pc.gc.ca, or Camille Collinson at camille.collinson@pc.gc.ca