Just as the forests of Gwaii Haanas are important places for many species and the people of Haida Gwaii, so are the underwater kelp forests.

Kelp forests are a huge benefit to the coastal communities and ecosystems. They act as nurseries, habitat and abundant feeding grounds for species of fish and seafood that people eat. Kelp forests act as the ocean’s cafeteria for everything from tiny shrimp to fish to large marine mammals. Kelp forests are also home to many species protected under Canada’s Species at Risk laws. Northern abalone is endangered and several species of rockfish are threatened or of special concern. 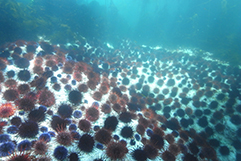 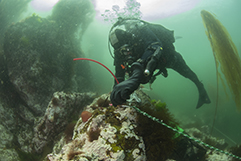 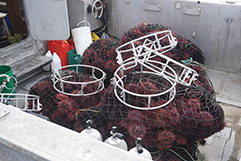 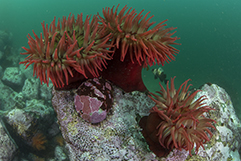 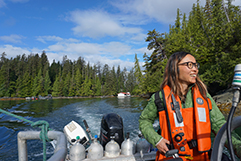 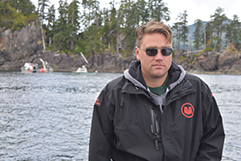 Kelp forests are important coastal ecosystems. They are critical habitat for many marine species.

Kelp forests also help protect shorelines from eroding by acting as natural breakwaters from storm surge onto the shore. In the fall, when the annual kelp species start to die back, storms rip up the kelp and leave it on the beach. This feeds shoreline ecosystems. It is also carried offshore feeding ecosystems that are further away.

Large kelp forests capture a lot of carbon because kelp can grow very fast. They remove carbon from the atmosphere and convert it to plant material, similar to forests on land.

Unfortunately, many of the underwater kelp forests of Gwaii Haanas are out of balance and are much smaller than they used to be. Nearly 200 years ago, ḵuu (sea otters) disappeared from Gwaii Haanas as a result of maritime fur trade hunting.

Coastal ocean ecosystems in the area have experienced a cascade of change ever since. This is because ḵuu are keystone predators – voracious consumers of marine invertebrates (shellfish) like sea urchins, crabs and abalone. Without ḵuu keeping their populations in check, spiny sea urchin numbers grew, and grazed down much of the kelp.

Although sea urchins are native species to the Gwaii Haanas ocean environment, there are now so many urchins that they are considered “hyper-abundant”. Urchins graze down the rich kelp forests that northern abalone and many rockfish species (quillback, copper, china, black, yellowtail and more) depend on.

What remains are much reduced kelp forests and more urchin barrens in many places. Urchin barrens are long expanses of ocean floor with many urchin and very little or no kelp. Similar to a clear-cut forest, these areas no longer support as diverse of a marine ecosystem.

Using traditional knowledge, local knowledge, and scientific information, they have started transforming urchin barrens into kelp forests in Gwaii Haanas. The project stretches along 3 kilometres of the Gaysiigas Gwaay (Murchison Island) shoreline. To restore kelp forests, a critical step is to remove the majority of urchins in the restoration area to help reduce urchin grazing on kelp. The regrowth of kelp forests will benefit abalone, rockfish, herring, salmon and many more marine species.

The project began in summer 2017. This included pre-restoration rocky reef marine life community surveys and collaboration to study and plan for restoration. In July 2017 scientific dive teams, including Haida Fisheries divers, counted seaweed (algae), fish and invertebrates at the project site. This work took place to observe, measure, count and record what species are living in the project area. In addition, the team tagged red urchins to be able to measure their growth rates in kelp forest compared to urchin barrens habitat.

In the summer of 2018, rocky reef marine life community surveys that were started in 2017 were re-surveyed prior to the restoration work.

Restoration work by Haida Fisheries and commercial seafood divers began in the fall of 2018. Guuding.ngaay (red sea urchin) with abundant and healthy roe were removed and taken to local communities for food. They were delivered to Haida Gwaii communities two separate times in 2018. Providing community food is a key component of the project. Guuding.ngaay is a traditional Haida food and considered a delicacy. Urchins are often hard to access because they are a long boat ride away from communities. Urchins that had little or no edible roe were cracked underwater. They were left to provide nutrients for fish, invertebrates, scavengers and decomposing organisms.

Hundreds of abalone were individually tagged to measure growth rates. These tagged abalone will be located and re-measured in following years. This and other research work will help to better understand abalone growth rates, diet, and behaviour changes when kelp forests are restored and urchins are removed. Answers to these questions are essential to implementing successful abalone recovery activities.

In spring 2019, urchin harvesters removed edible urchins and cracked other urchins from the restoration area. Again some were delivered to local communities for food. More than 75% of urchins between 0 and 17 metres water depth were removed along the 3-kilometre stretch of shoreline.

The respiration rates of red sea urchins living in urchin barrens and living in kelp forests were measured and compared. It was found that red urchins in barrens had much lower respiration rates than those living at the kelp line. This shows how red urchins can live in a zombie-like state with very slow metabolism and can survive for long periods without much to eat.

In 2019, 14 tagged abalone were located and re-measured. Another 200 abalone were tagged and released at each site. These tagged abalone will be searched for and re-measured in 2020. Tagging of red sea urchins also took place again to look at their growth rates after the restoration work. Tissue samples from abalone and urchins were also taken again. All of this work continues to build knowledge about abalone and red urchins as kelp forests change with restoration work.

In spring 2020, the Haida Nation and Parks Canada worked with the commercial urchin fishery to allow a limited red urchin fishery to take place at and adjacent to the restoration area as part of the commercial fishery. The fishery was monitored by a Haida Guardian and Gwaii Haanas personnel. This was done to allow maintenance of low urchin densities at the restoration site using existing partnerships and innovative management.

Because of COVID-19, much of the research and monitoring field activities planned for 2020 could not take place. The team did manage to conduct kelp forest community monitoring surveys in the late summer and collect tissue samples from abalone and red urchins again in 2020.

Since the project started there has been an incredible ecosystem response. Before restoration work, kelp only grew in a narrow fringe at the low tide level. In summer 2019, kelp was found growing two to five meters deeper than before urchins were removed. Six to nine months after restoration work, hundreds of kelp plants were observed growing along the kelp forest community survey lines (transects).

Canopy bull kelp has especially benefited from urchin removal. Many species of understory (shorter) kelps are benefitting as well. There is also a small grove of giant kelp more than 3 metres tall in an area where there was only one plant before restoration. Bull kelp has grown up to 10 metres tall in some places where there was little to no growth before urchin removals. The ecosystem is always changing, however. It is affected by year to year changes in the environment. In summer 2020 and 2021, kelp was less abundant overall than found in summer 2019, potentially because of different ocean conditions and also because of urchins continuing to move into the site from deeper areas and surrounding areas. Continued monitoring is needed to understand the longer term effects of the kelp restoration work and how different species in the ecosystem respond over time.

In summer 2021, kelp forest community monitoring surveys were repeated again to compare with previous years. Field research work to look at abalone and red urchin growth rates, abalone respiration and movement patterns, urchin roe quantity, and what these animals are eating was also conducted. Lab work and analyses of this data is continuing. Urchin control is planned to continue in partnership with the commercial urchin fishing industry.

Collaborations and partnership are key to success of any larger-scale ecosystem restoration project. The Haida Nation, Government of Canada and Pacific Urchin Harvesters Association, are proud to work together to enhance kelp forest and rocky reef ecosystems. These partners are working alongside Florida State University, University of Oregon, University of New Brunswick and University of British Columbia researchers to learn more about the effects of kelp restoration work on the ecosystem and to deliver on shared conservation goals.

To learn more about this project please contact Nadine Wilson at nadine.wilson@canada.ca, or Lynn Lee at lynn.lee2@canada.ca.