A few years ago, Parks Canada's Pacific National Parks joined forces with the Pacific Wildlife Foundation, BC Parks and the Laskeek Bay Conservation Society to survey black oystercatchers in the three coastal parks. Currently, Parks Canada continues to monitor black oystercatchers, using standard protocols that can be assessed on a local, regional and global scale.  The black oystercatcher (Haematopus bachmani) is a large, long-lived shorebird with a global population of 10,000 individuals occurring at low densities along the Pacific coast from the Aleutian Islands to Baja California. They feed on intertidal macroinvertebrates like limpets and mussels.

Oystercatcher populations are vulnerable to natural and human disturbances because they are confined to a narrow band of shoreline habitat. Major threats include predation of eggs and young by native and introduced predators; coastal infrastructure development; human disturbance (e.g., induced nest abandonment, nest trampling); vessel wakes, especially when they coincide with high tides; and larger scale effects like oil spill contamination and global climate change. 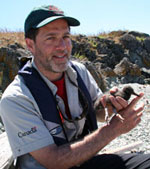 The black oystercatcher is an important indicator of rocky intertidal community health and is part of the Parks Canada Ecological Integrity Monitoring Program. Population surveys and associated research are being done in collaboration with British Columbia, Alaska, Washington, Oregon and California agencies as well as the Pacific Wildlife Foundation and Laskeek Bay Conservation Society. The Black Oystercatcher Conservation Action Plan guides our efforts toward better understanding of adult and fledgling survival, regional population size and trends, seasonal movements of individuals and inter-population mixing.

Since 2005, we have seen an increase in the numbers of nesting pairs of black oystercatchers. Since 2009, the number has been more or less stable. This is great news because the availability of suitable nest habitat is likely a limiting factor for the species. It highlights the significance and sensitivity of these nest sites. For that reason, protection of islets used for nesting is critically important to oystercatcher conservation and underscores the importance of park conservation actions.

Research expanded in 2007 to look at movement between populations and between winter and summer habitats. Some birds in each area have received coloured leg bands, helping us to detect seasonal movements, nesting site fidelity and inter-population dispersal (see table). In addition to leg bands, satellite and radio tracking devices are being used on birds in Pacific Rim National Park and Alaska for collection of more detailed movement data. Stay tuned for more information on the black oystercatcher in the near future.

We would like to solicit your cooperation and effort in tracking these banded birds. If you observe a banded bird, please note the pertinent information (band colour and location; geographic coordinates etc.) and contact the Bird Banding Office toll-free 1-800-327-2263 (1-800-327-BAND), or click here for more contact information.