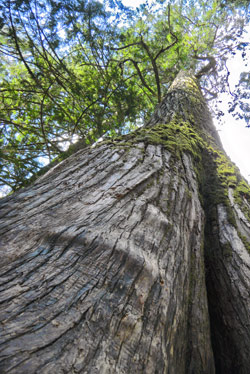 British Columbia has the world's only temperate inland rainforest, all of which is found in the Columbia Mountains. The interior wet belt owes its wetness to weather systems that come from the Pacific Ocean and rise over the Columbia Mountains. The result is moist to wet forests, predominantly old growth, similar in composition and structure to coastal rain forests. Mount Revelstoke and Glacier National Parks are part of a band of old growth forests that extend from the US border north to Wells Gray Provincial Park. Forests to the east and west are drier, in the rain shadows of the Coastal and Columbia Mountains, with a greater frequency of fire. Inland rainforests are limited to the wetter portions of the Interior Cedar Hemlock Ecozone (ICH).

Rainforest conditions develop inland as a result of plentiful snow melt during the early part of the growing season and a peak of rainfall during the middle of the growing season. These humid conditions enable the development of a unique vegetation community that contains many oceanic elements, of which many species of are restricted to old growth forests. Old growth ICH forests are dominated by Western Red Cedar and Western Hemlock at low elevations, with riparian hybrid White Spruce. At mid-elevations, Engelmann Spruce and Subalpine Fir (ESSF Ecozone) dominate the stand, with Mountain Hemlock in some areas. 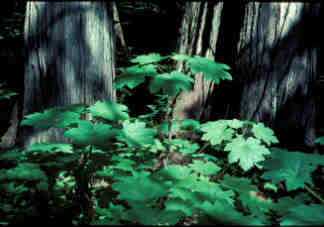 Unlike the coast, where windstorms and blowdown are the main stand replacing agents, occasional summer droughts and lightning storms result in infrequent, moderate intensity fires. In resulting early seral stands in the ICH, tree species diversity is very high, second only to the coast. Regeneration is frequently brush dominated, including alder, Douglas Maple, Thimbleberry, Red Raspberry, and bracken for decades, followed by gradual regeneration to a complex mix of early seral species, often with a major deciduous component, including Paper Birch, Douglas Fir, Trembling Aspen, cottonwood (in riparian areas) alder, Red Osier Dogwood, Mountain Ash. By the time a stand is old growth (200 plus years), most of the early seral species have dropped out, giving rise once again to cedar and hemlock dominated stands.

The most significant disturbance agents in these wet forests are insects and diseases. At about 400 years after a stand replacing fire, a typical old growth ESSF stand might consist of 20% surviving veterans of about 350 years old. The remaining 80% would be in the 100 to 200 years range, comprised of trees that established following a wave of widespread mortality from Western Balsam Bark Beetle. Most stands are multi-aged with numerous snags in all age classes, about 30% overall, due to ongoing scattered mortality from beetles, Armillaria root disease, and Indian Paintbrush fungus.

A typical 400 year old ICH stand might be composed of very old widely spaced trees, about 375 trees per hectare, covered with lichens and bryophytes, with variable understoreys of Devil's Club, Western Yew, Mountain Boxwood, and Oval Leaf Blueberry, Oak Fern, and herbs such as queens cup and bunchberry. These stands are also subject to waves of mortality, notably from Hemlock Looper infestations. The Hemlock Looper lays its eggs in lichen, hence its propensity for targeting old growth cedar and hemlock forests. Mortality is usually low, but variable throughout the stand.

Infestations follow seven year cycles due to internal parasites building up within the insect and eventually causing the outbreak to crash. In addition to periodic insect infestations, endemic fungal diseases cause scattered mortality and gaps between trees. Eventually, a multi-aged stand develops as tree regenerate within gaps created by ongoing mortality.

The forest in winter
© Parks Canada
Mountain Caribou make extensive use of both low and high elevation old growth forests due to their winter dependence of heavy lichen loads found mainly on 200 year old plus trees. Caribou require decadent cedar and hemlock forests at low elevations in early winter before snow has deepened and firmed up on subalpine winter ranges. They live off lichen-covered blow down trees and branches in the ICH, as well as making use of Mountain Boxwood in the understory before it is buried by deep snow. Later, in January when the snowpack has consolidated, caribou are able to migrate upslope to their ESSF ranges. There, they are able to reach lichen found higher up trees by standing on the three to four metre snowpack.

With snow depths exceeding two metres in open areas at low elevations for several months in winter, wildlife such as moose and deer would not be expected to survive here. Moose are impaired by about 80 cm and deer by 40 cm of penetrable snow. However, under a mature forest canopy, snow is about 50 % that of an equivalent open area. Snow depths are still excessive, but sinking depths are far less under mature and old growth canopies due to greater snow compaction from snow falling off the trees.

The deep wide crowns and well-developed understoreys of old growth forests provide better winter range than open areas, due to the provision of both snow interception and forage.

The old, widely spaced trees are frequently full of heart rot, but highly valuable to a large suite of wildlife for denning, roosting, and nesting. These include bats, fishers, martin, Wolverine, Black Bears, Pileated Woodpeckers, owls, and others. Little work has been done on plants and invertebrates, including lichens, bryophytes, and canopy insects found in old growth forests, yet these few studies have consistently identified numerous new species, many of which are old growth dependent.

The biological legacy of natural disturbance agents, surviving and dead standing trees, are very important to biodiversity as the structure that many species require for roosting, denning and nest sites. Deciduous trees, including birch, aspen and cottonwood, are frequently a major component of naturally regenerated stands following disturbance. Cavity nesters and other species make extensive, preferential use of these trees due to their early development (around 60 years) of required decadent features, such as heart rot and disease.

Modern forestry practices are aimed at maximizing commercial tree production through objectives such as having the forest fully occupied by densely stocked, rapidly growing conifers. Stocking standards are for 1000 to 1200 stems per hectare. This intensively managed forest regime has biologists concerned, in that there is a potential lack of:

Over the long term, loss of old growth forests, including their fragmentation into isolated patches, combined with the build up of early successional species in adjacent regenerating stands, are a major threat to biodiversity. With its limited land base, Mount Revelstoke and Glacier National Parks cannot preserve sufficient old growth forests to maintain biodiversity, including old growth dependent species such as Mountain Caribou. These parks are managed on the basis that natural disturbance regimes are critical to the maintenance of biodiversity.

These two national parks are also not large enough to encompass the inevitable actions of natural disturbance and therefore cannot be assumed to function as old growth reserves in perpetuity. In fact, fires along the Canadian Pacific Railway route during its construction during the 1880s resulted today's relatively large amounts of maturing second growth in Mount Revelstoke and Glacier National Parks, compared to provincial land outside the transportation corridor.

Protected areas such as national parks should be viewed as a small, essential part of a larger conservation package. Preserving adequate amounts of intact old growth habitats outside the parks requires cooperation among adjacent land use managers and support from the Canadian public.