The Nakimu Caves in Glacier National Park are currently closed.

The closure is required to allow Parks Canada to continue to focus on monitoring and research that will assess white-nose syndrome in the region and the potential impacts to bats in the Nakimu Cave system.


Nakimu is a Secwepemc word meaning 'grumbling spirits,' a name inspired by the sound of the throbbing cascades of Cougar Brook as it disappears from a subalpine forest into a series of sinkholes in Glacier National Park. 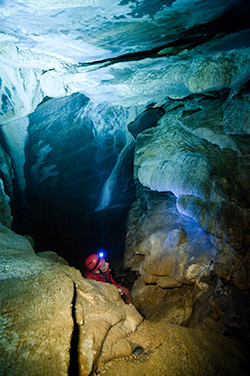 Water flowing through a soluble band of limestone sandwiched between harder rock types has carved an irregular system of caverns, narrow passages, drop-offs and other strange rock formations underground.

First explored by Charles Deutschmann in 1904, the caves were part of the Glacier House hotel era where early park visitors were escorted by Deutschmann, working as the first ever interpretive guide hired by a Canadian national park. A carriage road up Cougar Valley and a teahouse near the cave entrance were well used through the 1920's, but visitation declined with the closure of Glacier House.

The rotten, decrepit remains of staircases from Deutschmann's time were removed in recent years by work parties comprised of local cavers and park staff. Today Nakimu Caves are protected as a wilderness with the intention of keeping them as natural as possible.

In summer, passages near where the brook rumbles through reverberate with the sound of crashing water, reminding us that the caves are still in the process of formation. Blocks of rock still fall from the ceiling and lower passages can fill unpredictably with water.

In winter, stream flow is greatly reduced and most of the seeping water is frozen, often in bizarre arrangements. Cave temperature is only slightly cooler in winter than in summer, but in contrast to above ground winter conditions, a winter visitor finds the cave relatively warm.

Moonmilk, a bacteria-instigated precipitate of calcium carbonate, is one of Nakimu's remarkable features. It coats some of the cave walls with a pale ooze resembling soft cauliflower. It too easily bears the imprint of curious hands not intending to leave a permanent record. Marks in the moonmilk made by visitors from Deutschmann's time have yet to fully recover.