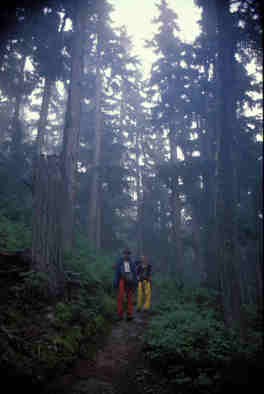 Our weather originates over the Pacific Ocean. Wet, mild westerly air masses are intercepted by the wall of the Columbias, dumping heavy rains in summer, and heavy snowfall in the winter. High annual precipitation, deep snow accumulations and relatively moderate winter temperatures are characteristic of the Columbias and their two national parks, Mount Revelstoke and Glacier. (For more on weather and seasons, visit our Weather page). 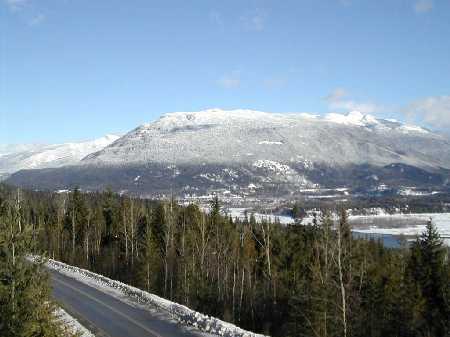 Glacier National Park contains three distinct life zones created by elevation. The three life zones can be thought of as "Rainforest, Snowforest and No Forest". The higher the elevation, the more often precipitation occurs as snow rather than rain. Deep, lingering snow and colder temperatures at high elevations shorten the growing season, until an elevation is reached beyond which no trees can grow.

At the lowest elevations in the park, the region's high annual precipitation falls mostly as rain. This is the interior rainforest: dense vegetation and large trees remind many visitors of the coastal Pacific Northwest. Western red cedar, western hemlock, and western white pine tower over shrubs such as devil's club, Pacific yew, and mountain box. A rich variety of ferns and mosses carpets the forest floor. 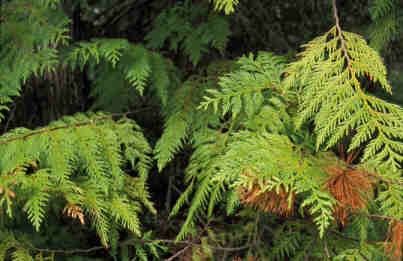 Foresters call this zone the Interior Cedar-Hemlock forest. The once-vast forests of British Columbia's interior wetbelt constitute the world's only inland temperate rainforest. You can experience this magnificent forest type along the Hemlock Grove Nature Trail. For more information on this forest type, read our fact sheet on Old Growth Temperate Rainforest. The Beaver Valley hiking trail leads through some of the most extensive contiguous old-growth forest left in southern British Columbia.

At the elevation of the Illecillewaet Campground, cedars thin out and more subalpine fir is seen in the forest. You are entering the interior subalpine life zone, known to foresters as the Engelmann Spruce/Subalpine fir zone. The lower subalpine forests are dominated by Englemann spruce, subalpine fir and mountain hemlock. Trees begin to thin in the upper subalpine near treeline, creating park-like, open meadows. The meadows explode into colour in August, with wildflowers including paintbrush, glacier lily, fireweed, lupine and monkeyflower. 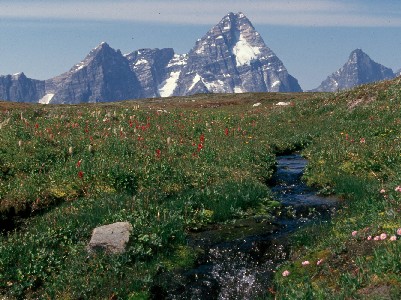 At about 2000m elevation on average, the growing season becomes so short that trees can no longer survive. Fully 50% of the area of Glacier National Park is found above treeline. Much of this area is rock. About 12% of the park is permanent ice and snow. Tundra vegetation includes heather and sedge meadows, but in many places only lichen survives, encrusting the rock. Areas above the treeline provide year-round or seasonal habitat for such wildlife as grizzly bear, mountain goat, white-tailed ptarmigan, hoary marmot, golden-mantled ground squirrel, mountain caribou and pika.

Specialized habitats found in Glacier National Park include avalanche paths and wetlands. Wetlands are very rare in the steep, narrow valleys of the Selkirk Mountains. The Beaver Valley contains many fens and wetlands along the Beaver River. Avalanche paths sweep from ridgetop to valley bottom. These areas green up early in spring and are important early season feeding areas for grizzly bears. Many park trails cross avalanche paths. Be alert and cautious for signs of bear feeding activity in these places.

For more information on aspects of Columbia Mountains ecology and wildlife: