"British Columbia is one of the few places in the world which still has significant populations of both black bears and grizzlies. However, as our population grows, we encroach on bear habitat, driving them further into ever shrinking wilderness. Humans have become the single biggest threat to BC's bears". - BC Ministry of Environment, Lands & Parks

Though there are issues associated with black bears (Ursus americanus), as a species they are not at risk. In contrast, grizzly bears (Ursus arctos) are no longer found in 99% of their former habitat in the lower 48 states and Mexico. A 1990 COSEWIC (Committee on the Status of Wildlife in Canada) review of grizzly bear populations designated over 60% of grizzly bears as either vulnerable or threatened and all were considered at risk.

Grizzly bears are notoriously difficult to census. Population estimates for British olumbia vary from 6,000 to 12,000 (about half the remaining population in Canada). Mount Revelstoke and Glacier National Parks are used extensively by grizzly bears but most leave the park at times during their annual travels. These parks are too small to provide enough habitat for a viable population.

Bears are the largest land based carnivores on the planet. However, due to their varied diet they are better characterized as omnivores. Typically, a grizzly bear's diet in the Columbia Mountains consists of less than 15% meat. The remainder is roots, herbs, berries, and insects.

Locally, grizzlies make extensive use of avalanche chutes in search of foods such as sedges, grasses, cow parsnip and various bulb producing flowers. Aided by their
long front claws and massive shoulder muscles, they rototill beds of glacier lilies and spring beauty to harvest nutritious bulbs and they excavate fat and protein rich Columbian ground squirrels from their burrows. In mid-summer, grizzlies often move to huckleberry patches in burned over forests to fatten on a diet rich in carbohydrates to prepare for winter. 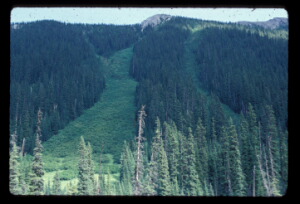 Bears are opportunists, always looking for something to eat. They protect prime sources of food and can be aggressive towards perceived competitors. Because they hibernate for half the year, bears have to eat enough in six months to last the whole year. Stores of body fat are especially crucial for nursing grizzlies. Females give birth to one to three cubs in early February while still in their winter dens and must wait three more months before they can emerge and eat again. Males are usually intolerant of other bears except at mating time.

Protein rich foods are not abundant in the Columbia Mountains. Deep snow limits ungulate numbers and available carcasses. Dams built on the Columbia River in the 1930's eliminated autumn salmon runs. Berry plants are most productive in old burned areas but the control of forest fires has reduced the extent of these patches.

Knowing how many bears roam this part of the world is central to managing their numbers. How long bears live, how many offspring they produce, why they die, are important questions for researchers to answer for wildlife managers. Because bears often live in remote, rugged, and densely vegetated environments, they are difficult to monitor.

In an effort to manage resources on an ecosystem basis, Parks Canada is part of the West Slopes Bear Research Project, a cooperative effort with the Columbia Basin Fish & Wildlife Compensation Program, the BC Ministry of Environment, Lands and Parks, BC Ministry of Forests, the universities of Alberta, British Columbia and Calgary, and the Friends of Mount Revelstoke and Glacier. The study uses radio telemetry and DNA fingerprinting techniques to assess population characteristics, habitat use, and movements of grizzly and black bears. The research is designed to obtain information needed for the long term management and conservation of both grizzly and black bears.

The study area is located in the upper Columbia River near Golden, British Columbia. This area spans a variety of habitats and management systems including national parks (Glacier, Yoho, and Kootenay), commercial forests, urban and rural settlement, and land flooded by hydro-electric development. In addition, the area is traversed by the Trans-Canada Highway and the Canadian Pacific Railway. In effect, it is a microcosm of the developments occurring in many parts of bear range in British Columbia and elsewhere.

Researchers capture bears and attach radio collars. These are essential because of the difficult terrain for tracking and locating bears. Around 25 collared bears are tracked weekly, mostly from low flying aircraft but also from the ground, to see what sort of habitat they use. Home ranges and movements are then determined.

Recent developments in DNA fingerprinting technology can identify individual bears from a drop of blood or a few strands of hair. It is also possible to trace the lineage of bears within the population, giving insights into bear social structures. Hair is collected when bears walk over or under barbed wire adjacent to scent lures. After the hair is collected, those with visible roots are kept for DNA analysis. In a three year census, the team has collected 4500 hair samples to reliably identify species, sex, and individuality of free ranging bears. This new technology is less intrusive than capturing bears and has numerous applications in field studies and censuses.

Nothing better represents the current struggle to maintain a portion of the wild, natural world than issues associated with grizzly bears. Human caused mortality and habitat loss are linked to the loss of grizzly bears from much of western North America. Their requirement for large, ecologically intact areas challenges our unlimited use of natural resources. How we manage grizzly bears will likely foretell the fate of all large carnivores.

In this region of British Columbia, the network of railways, highways, and logging roads has dramatically increased in the past century. Much of this development has happened in the past thirty years. Roads and railways may stress grizzly populations in several ways. Bears can be killed outright in collisions with cars, trucks, and trains or indirectly because of the increased access leading to both poaching and legal killings and conflict with other human uses. Less obviously, shy bears may be repelled from the noise and commotion of well used roads. There is concern that over time, some roads may fracture bear ranges and reduce the likelihood that grizzlies will persist over the long term.

The only instance where grizzly bears lose their normal avoidance of people is when food is involved. We leave behind garbage, fruit tree windfalls, hunting gut piles, picnic baskets, all of which can attract bears. Intolerance of grizzly bears near communities results in many being killed by Conservation Officers and persons concerned for their safety or property. However in recent years in Revelstoke, a citizen based education program has greatly reduced local bear mortality.

Preliminary results from the West Slopes Bear Research Project show that few bears are found in roaded valleys near communities, presumably the result of direct kills and displacement. This suggests that without concerted action, grizzly bears may be relegated to inaccessible areas only. This issue is likely to worsen in the Kootenays where human settlement and roads are increasing.

The region surrounding Mount Revelstoke and Glacier National Parks is near the front line of the shrinking grizzly range in North America. The pattern of local extinction within the grizzly's Canadian range may continue unless we make deliberate efforts to prevent it.

BEARS and PEOPLE: A Guide to Safety and Conservation on the Trail

READ this information carefully. Your behaviour affects the survival of wildlife and your own safety.