Caribou through the ages | Research In Action | Recovering a species at risk | What can you do?

Mount Revelstoke and Glacier national parks protect significant areas of the world’s only temperate inland hemlock-cedar rainforest. The lush old growth forests of this natural area support a rich diversity of plant and animal species. However, these two national parks are not large enough to protect these ecosystems from the increasing pressure of land use in the Columbia Mountains region. The decline of woodland caribou in this region is an important indicator of large scale change in the local ecosystem.

Caribou found in the Columbia Mountains belong to the southern mountain population of woodland caribou. They are distinct from other herds in their unique behavioural adaptations to the wet climate of this ecosystem. In early winter, they migrate to lower elevations where the old growth forest canopy reduces the amount of snow on the ground, making foraging easier. By mid-winter the caribou migrate up to the sub-alpine forest where the deep snow pack allows them to reach lichens growing high on tree branches. They will descend to the valley bottoms again in early spring to feed on fresh growth, returning to the high alpine meadows for the summer.

Mount Revelstoke and Glacier national parks make up only a small piece of woodland caribou habitat in the Columbia Mountains region. The caribou’s requirement for large, connected areas of old growth forest is challenged by the pressures of human land use. Conservation of woodland caribou in this area will require continued collaboration with provincial and local stakeholders to develop precautionary human use management and caribou conservation strategies.

Caribou through the ages

Caribou are highly adapted to snow and cold weather conditions. Their insulating coats and large hooves allow for travel through deep snow. Caribou would have been among the first animals to return to this part of the world at the end of the last Ice Age, around 9,000 years ago. In the late 1800’s, the completion of the railway marked the beginning of pressures related to increased development on woodland caribou populations. These pressures included hunting, habitat change from resource extraction (logging, mining, hydroelectric reservoirs) and transportation corridors. Conservation measures introduced in the 1930’s placed limits on caribou hunting, but their numbers have never fully recovered. No caribou hunting has been allowed in this area since 1996.

Currently the largest threat to caribou populations in the area is habitat loss. Since the 1970’s, hydro-electric reservoirs and logging have reduced low elevation old growth forest habitat. The younger forests that emerge after logging favour deer and moose populations and support increased predator populations. This increases the chances of caribou encounters with predators. The fragmented landscape can also lead to caribou expending greater energy to reach suitable habitat.

Recently, the expansion of recreation in the subalpine and alpine areas of the Columbia Mountains is causing greater direct disturbance of caribou populations, potentially displacing them from prime habitat. Displacement may result in increased exposure to avalanche risk and the expenditure of more energy to locate and forage for foods in areas away from humans and predators. 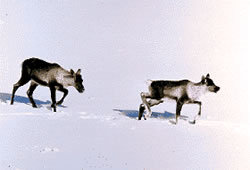 In an effort to manage resources on an ecosystem basis, Parks Canada has participated in caribou research and monitoring projects with provincial agencies since 1992. Partners in research include the BC Ministry of Forests, the BC Ministry of Environment, and the Columbia Basin Fish and Wildlife Compensation Program. On-going research in Mount Revelstoke and Glacier national parks is helping us better understand the ultimate causes of caribou decline in the area and to identify appropriate conservation actions.

How many caribou are there?

The caribou that range through Mount Revelstoke and Glacier national parks and the adjacent provincial lands are referred to as the Columbia South herd and the Duncan herd. As only a portion of their range is within the national parks, population monitoring is done in cooperation with the BC Ministry of Forests and BC Ministry of Environment. Recent census results (2011) suggest that only approximately 7-9 caribou remain in Columbia South herd, down from approximately 100 caribou in 1994. A census of the Duncan herd found 7 caribou in 2010, and 15 in 2008.

In 2004, Parks Canada began a partnership with the Province of British Columbia and several forestry companies to map important caribou habitat in Mount Revelstoke National Park in order to better understand where and how caribou use the landscape in the Columbia Mountains. These maps are used by Parks Canada as a basis for caribou conservation efforts including seasonal area closures, redirecting recreation from areas used by caribou and managing forest fires to minimize impacts to caribou habitat. A similar map for Glacier National Park is forthcoming.

Parks Canada cannot recover the Columbia South or Duncan herd of woodland caribou on its own. This is why Parks Canada staff are committed to working with the Province of British Columbia, First Nations, industry and the public to develop land-use management policies, both inside and outside national parks, to support the conservation of woodland caribou.

Recovering a species at risk

Five key threats have been identified as contributing to declining caribou populations in Mount Revelstoke and Glacier national parks. Based on these threats a number of conservation actions have been implemented, and other actions are being investigated.

What can you do? 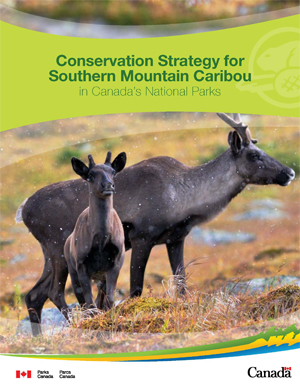 Be aware of how your actions can impact caribou