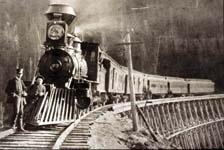 This is the story of the human struggle with nature in Rogers Pass.

In a century of searching, surveyors have located only one likely route across the central Selkirks: Rogers Pass. Without this pass, all railways and highways would have to take a lengthy detour northward around the mountains by following the Big Bend of the Columbia River.

The 1860s, 70s and early 80s were times of feverish surveying activity in the western mountains. In 1871, British Columbia joined Canada with the understanding that a transcontinental railway would soon be constructed to link it to the east.

In 1865, Walter Moberly found a route through the adjacent Monashee Mountains he called Eagle Pass, and probed from the west up the Illecillewaet River in the Selkirks. The next year his assistant, Albert Perry, pushed farther up the Illecillewaet and although optimistic at the possibility of locating a pass at the head of this valley, turned back before its existence could be confirmed.

Railway surveyor, Major A.B. Rogers, was a determined man. In 1881, Rogers' crew struggled up the Illecillewaet Valley past the point where Albert Perry had turned back 15 years before. Above the headwaters of the Illecillewaet River he glimpsed a narrow pass at the summit of the Selkirks. By that time he was out of food and had to retreat quickly back to the Columbia River. But he knew the long-sought pass had been found. 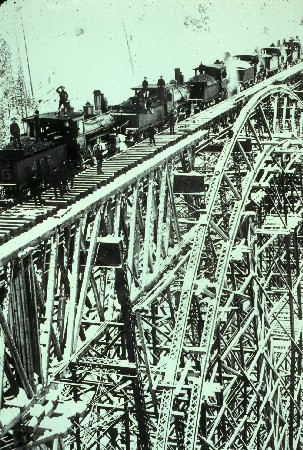 Early in 1885, ascending the Beaver Valley on the east flank of the Selkirk Mountains, the steel approached Rogers Pass, under the supervision of James Ross, the CPR's Manager of Construction. At Mountain Creek, Ross's forces built a trestle which stretched across a gap in the valley wall for 331 metres and stood 50 metres above the mountain torrent. A few kilometres farther up the line at Stoney Creek, a bridge was constructed which towered 64 metres above its foots. This bridge was heralded by the engineers of the day as the highest such structure in the world.

To compound his problems a new and unfamiliar force struck the work crews. The men are frightened, wrote Ross on February 19, 1885 to Van Horne, General Manager of the CPR. I find the snowslides on the Selkirks are much more serious than I anticipated, and I think are quite beyond your ideas of their magnitude and danger to the line. Already seven men had been buried in slides and two killed. Ross gained the summit of Rogers Pass on August 17, 1885 after six months of trail by avalanche, forest fire and rainstorm.

Laying out a good line down the Illecillewaet Valley was complicated by avalanche paths and steep grades. Ross solved the problem by constructing an intricate series of loops in the track, lengthening it by five kilometres and carrying the railway safely down the south side of the valley.

From Rogers Pass, Ross pushed the line to the Columbia River and out of the Selkirks. Crossing the Columbia River at what would become the site of Revelstoke, the line entered Eagle Pass and crossed the Monashee Mountains. On November 7, 1885, Ross's forces met the end of steel from the Pacific.

Canada's first transcontinental railway became a reality with the driving of the last spike 48 kilometres west of Revelstoke at Craigellachie. No sooner had the railway line been completed than it had to be abandoned to the overpowering forces of winter. The next year construction started on 31 snowsheds to protect the line from the worst slide paths known. The total length of the sheds was over 6.5 kilometres and they cost the railway a fortune to build and maintain.

"The Climax of Mountain Scenery" 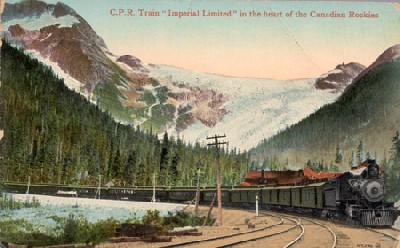 The mountains that battled the CPR all winter were tremendous assets in summer. The first scheduled passenger train service started in June, 1886. In summer, when avalanche dangers had passed, the trains could travel on track laid outside the sheds and the passengers could enjoy a view featuring the giant tongue of the Great Glacier protruding from the skyline.

Below the Great Glacier (later called the Illecillewaet) and on the main line, the CPR constructed Glacier House a traditional CPR hotel. Glacier House quickly became a popular tourist attraction and facilities were eventually expanded to include 90 rooms and related services.

In the same year that the first passenger trains ran through the pass, the Canadian government took steps to preserve the area for all time. Canada's first national park had been declared around the hot springs at Banff in 1885. In 1886, Yoho National Park in the Rockies and the embryonic Glacier National Park in the Columbias were established an area Van Horne described as the climax of mountain scenery.

The night of March 4, 1910, began like most other nights for the men working in Rogers Pass. The crew was at the summit clearing a big slide that had come down Cheops Mountain on the west side of the pass and had blocked the tracks.

A half hour before midnight, some of the men outside the cut heard a deep rumbling, then timbers cracking. An unexpected avalanche swept down Avalanche Mountain on the side of the pass opposite the first slide. Trapped within their snow-walled tomb, most of the men never even heard the slide approach. Fifty-eight died.

Between 1885 and 1911 deaths caused by avalanches totalled over 200. Faced with this kind of peril to employees and passengers, crippling costs and steep grades, the CPR acknowledge defeat and prepared to retreat from the summit of the pass.

If trains could not go safely over the pass then they would run under it through an eight-kilometre tunnel piercing the roots of Mount Macdonald. Operation of the eight-kilometre Connaught Tunnel commenced on December 13, 1916. Rogers Pass was abandoned. 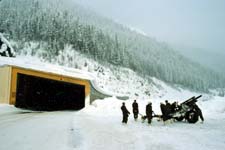 Work started on the construction of the Trans-Canada Highway through Rogers Pass in 1956 and in 1962 the road was opened to the public. Once again avalanches were the major threat and elaborate defence systems were developed to protect motorists on the new road.

Everyone travelling across Rogers Pass must pass through several snowsheds that shield the highway from avalanches at particularly hazardous areas.

In addition, earth dams, dikes, mounds and catch basins placed in avalanche paths contain or regulate snow slides. These static defences are similar to those used by the CPR to guard its original railway.

Unlike the original railway the highway is also guarded by a mobile system of defence. Staff are employed year-round studying the climate. In winter they make detailed weather and snowpack observations. Sophisticated remote sensors in special study areas high in the mountains above the pass continually radio weather information to a central forecast headquarters. The forecaster may decide to close the highway and attack the unstable slide areas with artillery.

Circular gun positions along the road shoulders are used to station a 105 mm howitzer manned by the Royal Canadian Horse Artillery. Under the direction of the forecaster the army bombards known trigger zones high up the avalanche paths. The shock waves from exploding shells fired by heavy artillery will trigger avalanches when snow conditions are right. With the highway closed the slides can thunder harmlessly down the slopes.

The new Trans-Canada Highway has had a major effect on Glacier National Park. Man is assaulting and modifying the natural environment along the highway. However, millions of people each year have the opportunity to see some of the earth's most rugged mountain wilderness.

There Can Be No Peace

It would be a mistake to think that Rogers Pass has been subdued. Each winter, crews and equipment are on guard day and night to keep the highway open. Tremendous amounts of human energy and money are spent holding the highway's position in the pass; and every winter, the timeless forces of snowfall and avalanche batter away at the defences. The Snow War goes on.