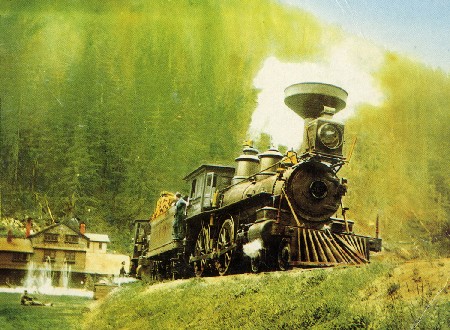 Locomotive departing Glacier Station
© Whyte Museum / Vaux Family Collection
Glacier National Park was established in 1886, simultaneously with Yoho National Park to the east. The Canadian Pacific Railway had just completed its transcontinental line, linking together the scattered settlements of the young nation of Canada. The spectacular scenery along the rail line suggested a potential for tourism to the railway company. Lodges and hotels were built to entice travellers to what had been uncharted wilderness only a few years before. The famous Rogers Pass is located in the center of Glacier National Park. The Pass was named for Major A.B. Rogers, Engineer-in-Chief for the railway. It has been designated a National Historic Site in commemoration of its role as an essential, yet perilous, link in the building of the transcontinental railway.


Very little is known about the use of the area by First Nations peoples before the arrival of the railway route finders in the 1860s and 1880s. Archaeological research has not yet discovered any occupation sites, although few such sites would have survived subsequent development for highway and railway operations. The long, snowy winters with their frequent deadly avalanches, the tangled and thick underbrush in summer, and poor hunting and fishing opportunities may have made most of the interior Selkirks, including what is now Glacier National Park, less attractive than the neighbouring valleys of the resource-rich Columbia River. However, at least four aboriginal groups are known to have used the region. More work needs to be done to fill this gap in our understanding of the human heritage of the Selkirk Mountains. 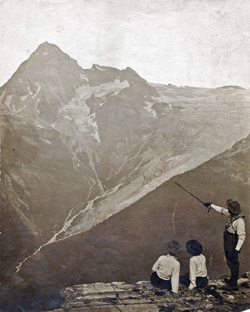 The park's first visitor facilities were developed by the railway company in response to the needs of its passengers. The Glacier House hotel and recreation complex offered not only meals and accommodation, but also sightseeing, mountaineering, touring the Nakimu Caves and ... bowling!

The first technical mountain climbing purely for recreational purposes in North America occurred in the mountains near Glacier House. In 1899, Swiss guides were hired to introduce novice groups to the world of mountaineering and glacier travel.

The nearby "Great Glacier" (now known as the Illecillewaet Glacier) was a major attraction. Annual visitors from Philadelphia, the Vaux family, created a valuable photographic record of the progressive retreat of this glacier up-valley. Following the closure of Glacier House in 1925, facility development in the park was limited primarily to trail construction, until the early 1960s.

With the opening of the Rogers Pass section of the Trans-Canada Highway in 1962, additional facilities intended for the new automobile-oriented visitor were developed, including campgrounds, picnic areas, viewpoints and commercial services. Today's explorers will find heritage resources of national significance, both historical and natural. The abandoned right-of-way, stone bridges and trestle supports, equipment, snow sheds and other structures associated with the construction of the railway may all be visited on self-guiding trails. Trails leading to spectacular glaciated viewpoints were laid out by the Swiss guides for their clients a century ago--and are still waiting for you to discover the magic of the Selkirks for yourself.