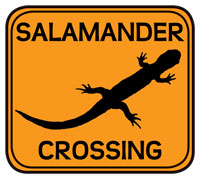 Waterton's salamander saga is becoming a story of hope as Park staff and researchers continue their efforts to ensure this population is safe for many years to come.

Modifications to a newly installed curb in 1993 helped the long-toed salamander cross the road, but vehicle-caused deaths were still occurring.

Crossing under the Road

Tunnels under the road were installed in spring 2008 to reduce vehicle-caused deaths of the salamanders and other small wildlife. 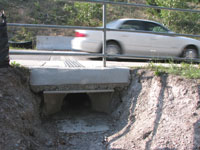 Salamander migration takes place on humid and wet nights. These specially-designed tunnels have slots that allow air, moisture and light inside, creating a suitable environment for them to enter.

Not Just for Salamanders

Tiger salamanders , western toads and red-sided garter snakes have also been killed by vehicles at this location, and may use the tunnels.

Why All the Fuss?

Salamanders may be small, but they are not insignificant! They are a top predator in their ecosystem. All plants, animals and natural processes are interconnected and important to the health of the park.

How Will We Know the Tunnels Work? 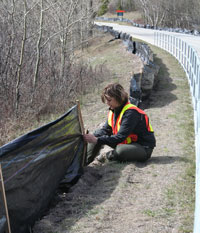 The use of the tunnels will be monitored for two years and modifications will be made if needed.

The fencing along this stretch of road directs salamanders into 'pitfall traps' where researchers collect, measure, mark, and then release them. Smaller fences will be installed after this study is completed. 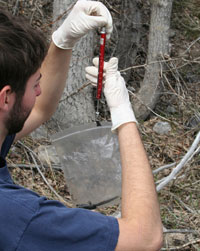 Each salamander is weighed, measured and marked
© Parks Canada

Researchers are studying the salamanders to estimate their population numbers and track their movements to and from their over-wintering habitat. This will help ensure that their habitat is properly protected and managed.

The research from this project will help conserve amphibian communities in other places where roads affect their populations.

Each salamander is weighed, measured and marked
© Parks Canada

Released and on its way!
© Parks Canada