Finding bear tracks during a backcountry hike is thrilling and daunting. But the encounter also offers us hope and inspiration.

Healthy populations of both black bears and grizzlies indicate that there are likely enough high quality, secure habitats and travel corridors to preserve hundreds of other species that depend on the same healthy ecosystem for their survival.

Most of Waterton's visitors never see a bear, but all of the park and surrounding areas are bear country. Bears foraging on human food or garbage become less fearful of people, and more dangerous.

Bear management programs operate to maximize human safety while preserving bear populations - a very delicate balance.Whether visitors plan to hike for days or simply sightsee for a few hours, it is important to take the time to learn about special precautions in bear country

Grizzlies have a large muscular hump on their shoulders, a concaved face in profile and a broad and 'dishlike' face from the front. Their front claws are long, averaging six inches, and are mainly used for digging. The grizzly bear comes in a wide variety of colours from jet black to almost white.

Grizzlies are always looking for something to eat. While an average male human eats about 2,500 calories/day, an average grizzly bear eats 30,000 cal/day. That's equal to about 40 hamburgers + 40 sundaes daily!

Typically, a grizzly bear's diet is roots, herbs, berries and insects; less than 10% of their diet is meat. In spring, aided by their long front claws and massive shoulder muscles, grizzlies rototill beds of glacier lilies and spring beauty to harvest nutritious bulbs, and excavate fat ground squirrels from their burrows. In mid-summer, they move to berry patches to fatten up for their long winter hibernation.

For half the year, grizzlies have to eat enough to last the whole year. Females in their winter dens give birth to cubs in early February, three months before they emerge to eat again. If stores of body fat are not adequate before denning, cubs are not conceived. 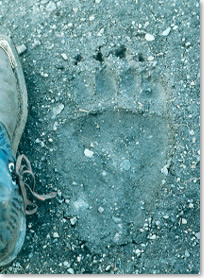 Grizzlies have one of the lowest reproductive rates of the mammal family in North America. Grizzlies don't reach sexual maturity until they are at least 5 years old. An average of two cubs are born, but their death rate is high. The interval between litters is about three years, because a grizzly mother needs time to pass on detailed knowledge of her home range to her cubs. With an average 20 year lifespan, a grizzly may have only 5 litters of cubs. This means that once grizzly population numbers are reduced, it is hard for them to recover.

Due to their large range requirements, grizzlies cannot survive solely within the boundaries of national parks. The greatest threat to grizzly bear numbers is loss of good habitat. Waterton does not provide even one entire grizzly home range. A typical male grizzly's home range is over 800 sq km, while an adult female with cubs uses about half of that.

The number of bears in the park fluctuates widely because their movements and use of area changes with the season, the amount of available food and the number of other bears sharing it. Bears in Waterton are part of a larger regional population which wander widely between British Columbia, Montana and Alberta.

Habitat loss and human-caused death are the biggest contributors to the loss of grizzly bears from much of western North America. Their existence depends upon good management and cooperation among all land users throughout their entire range. How we manage grizzly bears may foretell the fate of all large carnivores.

How can we help them survive? We can:

The implementation of the Southwestern Alberta Grizzly Strategy, is an important cooperative program working to save the grizzly bears in our area.

Black bears are more common in Waterton than grizzly bears. Despite their name, they come in a wide variety of colours.

Black bears are occasionally seen on open slopes, in forested areas, along roadsides and in campgrounds. They lack a hump on their shoulders, and have a straight facial profile.

They have short curved claws and are agile tree climbers. The black bear's diet includes grasses, roots, and berries. Carrion, insects and mammals also make up a small percentage of their diet. Their hearing and eyesight are good but their sense of smell is acute and as a result this is the sense they rely on most often.