Waterton's wild members of the cat family - cougars, lynx and bobcats - are known for their superb hunting skills. These wild cats are secretive and solitary predators. They have excellent vision, powerful jaws and retractable claws.

Wolves and coyotes are the members of the dog family (canids) found in the park. Coyotes are by far more abundant and visible. Although sometimes seen on their own, canids, particularly wolves, often travel and hunt in packs. 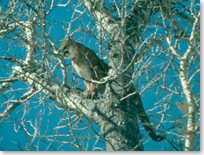 The cougar (mountain lion, puma) is the largest Canadian cat. Cougars are solitary, nocturnal and rarely seen. Their lair is usually in a crevice among rocks or in the shelter of a windfall.

Cougars can breed year round if their food sources are abundant. The spotted, blue-eyed kittens weigh just under a pound at birth.

Cougars hunt by stalking and pouncing, much like a domestic cat. While deer are a favourite food, they also hunt elk, small mammals, bighorn sheep, and even moose.

Cougar tracks are often sighted in winter at various park locations. Their tracks are distinguished from a canid's by the lack of claws which are retracted while they walk or run. These, and other signs, indicate healthy population of cougars throughout the park.

Park wardens regularly monitor cougar activity, particularly since these cats have frequently been sighted in and near the townsite in winter. The cats are attracted to the large numbers of deer there. Residents have been encouraged to enclose the bottom of their decks and any crawl spaces beneath their buildings. 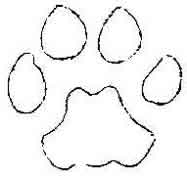 This reduces the number of places available in town for cougars to hide themselves and any prey that they have killed. Visitors are encouraged to learn more about safety precautions relating to cougars.

The lynx is a specialist of high elevation mountain habitats and mature forests. They need dense forests to provide cover for their den sites and enough new vegetation growth to support a good population of snowshoe hares, their main food source. They may supplement their diet with red squirrels, grouse, mice and voles. They have large feet, which aid travel in snow, and long tufts on the tips of their ears.

While the Canada lynx is listed as threatened south of the border, it is not considered at risk in Canada. Nevertheless, because they have a secretive nature and are uncommon in Waterton, lynx are rarely seen here.

Like the lynx, bobcats are uncommon and not often seen in Waterton. They tend to prefer open woods, thickets, coulees and areas with low snowfall. This means they are more often found in the eastern parts of the park. While bobcats hunt similar prey, they are tawnier in colour, slightly smaller in size, and have smaller feet and ear tufts than lynx.

Wolves are rare in Waterton. Although they depend mainly on large animals like deer, elk, moose and sheep for food, they also prey on a wide variety of smaller animals.

Like many predators, wolves were extirpated from southern Alberta and northern Montana in the early 1900's. Since then, their populations have modestly expanded several times, only to be reduced by intensive campaigns to exterminate them.

In the 1970's and 1980's sightings increased regionally. The first wolf pack known to den in Montana in more than 50 years raised a litter of pups in Glacier National Park in 1986. These wolves had moved south into Montana from British Columbia. In 1993, the first documented den in southwestern Alberta since the 1950's was found in Waterton near the Belly River. Wolf recovery regionally resulted in the establishment of several wolf packs in southern Alberta at that time. Since then, wolf numbers have continued to fluctuate. The key to recovery of wolves in this area is their protection in the Flathead Valley in Montana and British Columbia (the source area for most wolves in southern Alberta), as well as a shift in negative attitudes toward wolves.

Alberta's Wolf Management Plan calls for a population of 50 wolves to be maintained in southwestern Alberta. This plan is consistent with Parks Canada's interest in maintaining wolf populations as part of healthy regional ecosystems . Livestock and wolves can live together as long as there is good livestock management, fair monetary compensation for lost livestock, and if offending wolves are quickly identified and destroyed. Most wolves now seen in Waterton are just passing through, as they range over much larger territories that include only a small portion of the park.

The protection of wolves in national parks alone will not ensure their future survival. Wolves wander extensively to find food and shelter. For example, one of Glacier National Park's radio collared wolves travelled north, almost to the Yukon, in one winter! For wolves to survive, they need room to roam, as well as our understanding and tolerance. 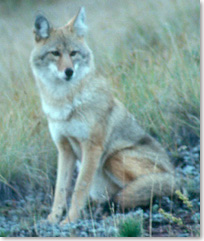 If you see a large member of the canid family in the park, chances are it's a coyote. While their nocturnal serenades are sometimes heard in the park's aspen forests and prairies, coyotes have also been seen on mountaintops. They are far more common here than wolves.

The coyote is medium-size, with a slender muzzle, large pointed ears and a bushy tail held upwards when excited, and downwards while running. The family pack is the basic social unit. The litter, usually five to seven, is born in May. Both parents help raise the young. Mated pairs usually stay together for several years.

Coyotes are scavengers and active predators of small rodents, birds and sometimes deer. They are often seen patrolling near roads in search of animals killed by vehicles.

Coyotes are known for their teamwork while hunting. In winter, they have been seen chasing deer out onto frozen lakes, keeping them trapped on the slippery surface until they weaken or die. In turn, coyotes must be alert for larger predators such as cougar, wolves and bears.