Amphibians and reptiles have generally received far less attention than other forms of wildlife. In part, [their] inconspicuous behaviour contributes to the lack of awareness and interest, but the often negative perception of amphibians and reptiles has also led to misconceptions and lack of appreciation for these organisms. Effective conservation incorporates the protection of all species, and concerted efforts must be made to improve awareness and understanding of less recognized wildlife.

There are only 10 species of herptiles in Waterton Lakes National Park, but they are no less important than the larger, more visible animals.

The Montane and Foothills Parkland ecoregions have the greatest variety and density of reptiles and amphibians.

Six species of amphibians are found in the park:

Four species of reptiles are found in the park:

While frogs and toads are both amphibians, which means that part of their life is spent in water and part on land, toads tend to spend more time further from water than do frogs. They both lay their eggs in or near water. The eggs hatch into swimming larvae or tadpoles with gills. The larvae eventually transform into young adults with lungs and legs.

The park would not be the same without their distinctive night time mating calls. The Boreal Chorus Frog sounds the first notes of spring, while the western toad rings out with its high-pitched trill in summer. Frogs are common in areas of shallower water in the park such as the Maskinonge, Blakiston beaver pond and Little Akamina Lake. The alert observer may find toads near wetlands and along many of the park's forested trails (especially the Lakeshore Trail). 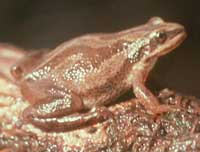 Boreal chorus frog  (Pseudacris triseriata) - This small nocturnal amphibian has a loud voice, similar to the noise produced when running a finger along the teeth of a comb. Adult chorus frogs live mainly in open grassland and deciduous woodlands, where they feed on a variety of invertebrates. They breed as soon as snow melts from shallow ponds and marshes. Chorus frogs hibernate in burrows on land. They freeze solid during the winter, then thaw out and carry on in spring.

Northern leopard frog (Rana pipiens) - Once the most widespread frog species in North America, the northern leopard frog had not been seen in Waterton since 1980. That is until Parks Canada’s recent translocation (introducing a species from an already wild population) efforts brought the frog’s eggs back into the park in 2015. Leopard frogs have dark spots, with light halos, irregularly marking their body, much like a leopard. They are usually found in moist places along the edges of streams and ponds in meadows or lightly wooded areas. The best way to find a leopard frog is to listen for its distinctive call that sounds like a door creaking open, followed by a little chuckle sound. Previous restoration efforts to help this species at risk regain its foothold in the park were unsuccessful. The current project is showing promising results. We observed translocated northern leopard frog eggs successfully mature and breed a new generation of juvenile frogs in Waterton in 2017 and 2018. This is a significant step toward re-establishing a self-sustaining population in the park. Northern leopard frogs are listed as a species of special concern under Canada’s Species At Risk Act (SARA) and are designated as threatened under the Alberta Wildlife Act regulations.

Spotted frog (Rana luteiventris) - Uncommon in Waterton, the Spotted Frog occurs in areas from Foothills Parkland to the Lower Subalpine. They are similar in size and appearance to the Northern Leopard Frog, but lack the light stripes along the back and light rings around the spots. Generally they are pink or red underneath and may have a dark mask around the eyes and snout. In the spring, while floating in forest ponds, the male utters a low pitched call similar to a distant helicopter.

Western (boreal) toad (Bufo boreas) - Populations of Western Toads appear to have declined in Waterton since 1995, possibly due to habitat changes caused by flooding that year. In spring, a female may deposit up to 16,500 eggs in a shallow pond or lake, usually in forested habitats. The eggs hatch into tadpoles that feed largely on algae and plants for 6 to 8 weeks while developing into toadlets. Relatively toads reach maturity, as eggs, tadpoles and toadlets are important foods for birds, mammals and other amphibians.

There are two salamander species in Waterton. The long-toed salamander and the tiger salamander are both uncommon and reclusive, finding shelter under rocks, rotting logs and in natural holes, crevices and burrows. In spring, they migrate to nearby water bodies to mate and lay their eggs. After passing through a larval stage, juvenile salamanders migrate back to their ancestral home ground. Many may face death if their migration paths cross a road.

Long-toed salamander (Ambystoma macrodactylum) - Adult Long-toed Salamanders live in forested areas. On cold wet spring nights, as soon as the snow and ice have melted, they migrate en masse to breed in the shallow waters of ponds and small lakes. They spend 2 to 4 weeks breeding and laying eggs there before returning home. After hatching, the larva grow and metamorphose into juvenile salamanders. The juveniles then return to the same areas where the parents originated, and mature in 2 to 3 years. Long-toed salamanders have been recorded along the Wishbone Trail, at the Maskinonge picnic site, the Akamina Trail, Linnet Lake and in ponds near Sofa Mountain. They are best seen at night or after rains during spring breeding season. A fascinating story of the long-toed salamander began on one such rainy spring evening in Waterton.

Tiger salamander (Ambystoma tigrinum ) - Tiger Salamanders may be active both day and night. They inhabit burrows in locations from short grass prairie to the subalpine. They feed on insects, invertebrates, small amphibians and other salamanders. In spring they migrate to nearby ponds to breed. The female deposits fertilized eggs on vegetation or rocks in the water. The eggs hatch into larva with large external gills. When conditions are right they can mature without metamorphosing into the adult phase, retaining their gills and fins while developing lungs.

Saga Of The Salamander

Reptiles are cold-blooded, terrestrial vertebrates . Except for the bull snake, which is considered rare and accidental in the park, all of Waterton's reptiles are garter snakes. It is unusual to see any snake in Waterton, and none are poisonous.

Snakes and other herptiles are ectothermic, which means they depend on external sources of heat to maintain their body temperature. When snakes are seen in the park, they are usually basking in the sun on a rock, on or near a road soaking up the warmth of its dark surface, or taking swim in a pond or stream. Unfortunately, when snakes warm themselves on road surfaces, many are run over.

Bull snake (Pituophis melanoleucus) - Bull snakes are rare in Waterton. They are yellow-brown to brown with black markings and grow up to 1.5 meters (5 feet) long. Although non-venomous, when threatened, Bull snakes may coil, raise their head and hiss while shaking their tail in imitation of a rattlesnake. Bull snakes eat burrowing mammals, ground nesting birds and eggs. They kill their prey by constriction, then swallow the animal whole. Special stretchy ligaments allow their jaw to expand so that they can swallow animals up to five times larger than their head. Strong stomach acids digest their prey without needing to chew it into smaller pieces.

Wandering garter snake (Thamnophis elegans vagrans) - When a snake is seen in the park, it is usually a wandering garter snake. This snake is found in a variety of habitats, particularly near wetlands, ponds, lakes and rock piles. It is distinguished by its yellow back stripe and dark checkerboard patterns along its sides. It eats insects, worms, fish, amphibians, birds and small mammals. In turn, garter snakes are an important food source for other animals such as hawks, ravens, coyotes and weasels. Wandering garter snakes overwinter by gathering in large groups in dens. Their dens may be used for many generations and by different species of snakes at the same time.

Plains garter snake (Thamnophis radix) - While common in prairie areas outside the park, the Plains Garter Snake is rare in Waterton. They inhabit wetlands and stream courses where they feed on fish, amphibians, small mammals, worms and insects, which they find by eyesight or scent. Like most snakes, they use their flickering tongue to taste the air and carry scent particles to a specialized sensory organ on the roof of their mouth.

Red-sided Garter Snake
Red-sided garter snake (Thamnophis siralis) - The red-sided garter snake is also rare and is usually found near wetlands and along roads in Waterton's Foothills Parkland and Montane ecoregions. These snakes are found across North America. As their name implies, they usually (but not always) have a long narrow red stripe along each side of their body.