From bottom to top

In general, you can divide Waterton's landscape into four ecoregions:

Vegetation is used as the basis for classifying ecoregions, but they are not defined by a single species of plant. Instead, they are classified by plant communities.

For example, a trembling aspen does not signify the Foothills Parkland Ecoregion (they grow at higher elevations too), but aspen growing in association with rough fescue, lupines, saskatoon and chokecherry does. Ecoregions also reflect climate patterns as well as soil types.

Boundaries between ecoregions vary with altitude and according to an ecoregion's north-south-east-west orientation. For example boundaries occur higher on warmer, drier, southerly and westerly slopes compared to cooler, moister northerly and easterly slopes.

The Foothills Parkland and Montane Ecoregions are particularly rich in birds, and the Montane and Subalpine are productive places for small mammals. The highest concentration of development and human use also occurs in these two ecoregions.

The Foothills Parkland and Montane Ecoregions also characteristically have very productive stream valleys, with important wetlands and riparian (streamside) woodlands. Wetlands contain the most diversity of species and highest densities of wildlife of any areas in Waterton Lakes National Park, and are particularly important for amphibians and water birds. They are also very sensitive to disturbance.

Significant wetlands in Waterton include the Maskinonge, Upper Crooked Creek (Sofa) wetlands, and those located along lower Blakiston Creek. Many of these wetlands and surrounding habitats are sustained and enhanced by beaver activity. Beaver ponds maintain deep water wetlands and create diverse habitats at the water's edge by clearing adjacent woodlands and by supporting growth of nearby shrubs. 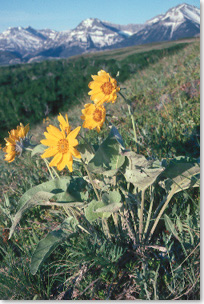 Waterton is the only Canadian national park where the Foothills Parkland Ecoregion is represented.

Regionally, the Foothills Parkland occurs in a limited geographic area, occupying a narrow band along the eastern edge of the foothills from Calgary south to Waterton, and into parts of Glacier National Park and the Blackfeet Indian Reservation.

Within Waterton, the Foothills Parkland Ecoregion is located on the east side of the park and makes up 10% of Waterton's area.

Rough fescue (Festuca scabrella) grasslands and aspen (Populus tremuloides) groves characterize the Foothills Parkland Ecoregion. The grassland sections typically have a moderate shortage of soil water (due to low precipitation and/or strong drying winds), while forest habitats have ample soil water. The altitudinal range of Foothills Parkland is between 1280-1500 m.

The Foothills Parkland is much more than a combination of grass, aspen, wind, sun and little moisture. It is an intricate web of life and natural processes woven into a place quite unlike any other.

Look closely and discover the different shapes and shades of greens, the rainbow colours of prairie flowers, and the cool, soft light of aspen groves. This is home for coyotes, badgers, red-tailed hawks, elk, deer, northern harriers, mountain blue birds and Columbian ground squirrels - to name just a few.

Unlike cultivated grasses, native fescues retain much of their nutrient value through the winter. This is crucial for the large herds of elk wintering in the park as well for the resident bison. Frequent chinook winds also benefit ungulates here, as they sweep grass clear of snow. The winds also cause snowdrifts on the leeside of hills and in sheltered gullies. Groves of trees and shrubs, which shelter birds and other wildlife, grow in these moister places.

The open nature of the aspen forest canopy lets sunlight filter through to the forest floor, allowing substantial plant growth. Some typical plants are horsetail, cow parsnip, stinging nettle, chokecherry, saskatoon and western meadow rue. Animals rely on these forests for both shelter and food.

Aboriginal people knew Waterton as the place where the prairie came right to the mountains and beyond. They were intimately tied to this ecoregion, often calling themselves the people of the grass.

This ecoregion occurs at elevations above the Foothills Parkland, between 1280-1680 m. It is a mix of dry grasslands and relatively open mixed poplar and coniferous forests. Douglas fir and limber pine are distinctive trees of this ecoregion.

Bluebunch wheatgrass is a prominent grassland species found on drier, exposed slopes. Lodgepole pine forests are also present but they extend into the Subalpine, making them a poor indicator species.

Regionally, the Montane Ecoregion occurs in patches along the foothills from northern Montana to the Bow and North Saskatchewan river valleys in Banff National Park. The most northerly occurrence is along the Athabasca River in Jasper National Park.

The Subalpine is Waterton's largest ecoregion, accounting for approximately 35% of its total area.

The Lower Subalpine is moist and cool. Forests are dominated by Engelmann spruce and subalpine fir. They have deep shade with tree lichens, feather-mosses, false azalea, huckleberry, honeysuckle and wintergreens. This is the home of the Clark's nutcracker, Steller's jay, Canada jay, varied thrush, grizzlies, wolverines and snowshoe hares.

In the Upper Subalpine the forest becomes more open, and the trees smaller. Whitebark pine and subalpine larch enter the mix here. The oldest trees in the park are subalpine larch (Larix lyallii). One at Lower Rowe Lake is over 700 years old - the oldest known in the Canadian Rockies! At the subalpine's upper elevations, wind and moisture stress cause stunted and twisted growth, forming distinctive kruppelholz trees (crippled wood).

This ecoregion accounts for almost 25% of Waterton Lakes National Park.The treeless Alpine Ecoregion occurs above the Subalpine, at altitudes of 2250 m to over 2650 m.

Much of this ecoregion is not well vegetated in contrast to alpine areas further north in the Canadian Rockies. Alpine vegetation is like a fine mosaic.

The Alpine Ecoregion is similar to tundra found in the arctic. The word tundra comes from the Finnish tunturi meaning "a treeless plain." Characterized by low temperatures and strong winds, the alpine has a short growing season (rarely over 60 days).

Most plants are perennial and reproduce through rhizomes and bulbs rather than by seed. Amazing wildflower displays can be seen if you catch them during their concentrated flowering period. The atmosphere is also thinner and ultraviolet light is more intense. Some botanists feel this may be why alpine flowers are so intensely coloured - to protect them from the high UV light.

Alpine plants are adapted to dry, windy conditions because steep slopes cause rapid runoff, high winds increase the rate of evaporation, and the thinner air holds less water vapour. Wind and frost also produce thin, unstable soil except in small, protected pockets. This means these plants tend to be low, ground hugging and grow in mat-like patches. This helps them avoid high winds and live in the warmer, moister air which is at ground level and trapped in the plant's mat-like growth. Hoary marmot, pika and white-tailed ptarmigan scratch out a living in this not so friendly ecoregion.