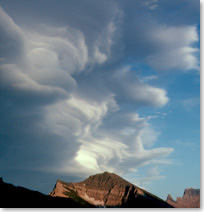 Chinook winds blow more often in Waterton than most places in Alberta, and these warming winds help make the park one of the warmest areas in Alberta in winter.

When a chinook blows in, temperatures can rise dramatically and snow seems to disappear in front of your eyes. In Blackfoot, chinooks are referred to as asi’kssopo (pronounced aaks-SICK-sooh-pooh), meaning "warm wind." Similar winds occur in other parts of the world including Germany, Switzerland, New Zealand and Argentina.

What is a chinook?

It is a strong wind which rapidly descends the lee side of mountain slopes. As the air falls, it becomes warm and very dry. In Waterton, winds carrying warm, moist air from the Pacific glide up and over the western slopes of the Coast and Rocky mountains - expanding, cooling and losing moisture. Once over the mountains, the now-dry air plummets to the prairie, warming by compression. For every 100-metre drop in elevation, the temperature raises one degree Celsius.

Chinook winds blow from the south or southwest and can reach speeds over 150 km/h. The wind turbulence is similar to the action river water makes when it hits a rock. As the air flows down, waves are created. The high crest of the wave creates a distinctive cloud band parallel to the mountains called a chinook arch.

How frequent are they?

Chinooks can happen year round, although the warming condition is more apparent in colder weather. A chinook can last less than an hour or for several days.