Waterton is a small piece of the international Crown of the Continent ecosystem. Its climate is strongly influenced by prevailing Pacific maritime weather systems. Warm, moist air flows over the Coast Mountains and Columbia Plateau before spilling across the narrowest point in the Rocky Mountain chain. This moist air often meets a less dominant weather system, the cold, dry Arctic Continental. When this cold Arctic air and warm Pacific air meet, the warmer air is forced up and creates ample snow or rain.

As a result, the park receives Alberta's highest average annual precipitation - 1072 mm (42 inches). This influence is also reflected in the big differences in moisture levels from west to east across the park. Cameron Lake, at the continental divide , receives an average of 152 cm (60 in) annually while further east, the townsite receives 107 cm (42 in) and the park gate receives only 76 cm (30 in)!

As with most places along the continental divide, most of Waterton's precipitation falls as snow (575 cm/225 inches in the townsite). Waterton's winds play a major role in redistributing snow. Windward slopes in the park are scoured bare while leeward slopes accumulate large drifts. Windswept slopes and prairie form key foraging areas and travel corridors for wildlife. Slow melting, snow-packed bowls and alpine valleys help keep water flowing in the streams and rivers during the summer months. 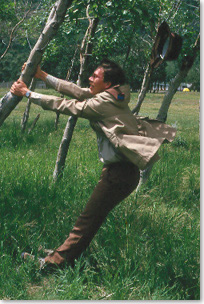 In most years, spring runoff is contained in streams, rivers and lakes then absorbed by soil and plants. Occasionally, a combination of heavy June rains, warm temperatures and a large melting snowpack has resulted in flooding.

The Pacific Maritime influence with its high precipitation and more moderate temperatures is so pronounced and persistent that it has spread plants and animals into Waterton which are more commonly associated with areas west of the Continental Divide. Beargrass is a good example of this. The cold, dry Arctic Continental, influences the dispersal and establishment of plants and animals down along the Rocky Mountain chain and east from the prairies. Together theses two opposing weather systems help to produce a unique meeting place for plant and animal communities.

Wind, with an average daily velocity of 30 km/hr, is a noticeable and important element of the park's climate. While gusts of over 100 km/hr (60 mph) are common in the fall and winter, gusts of over 150 km/hr (90 mph) have been recorded in the main valley. Winds are frequent and strong because the park lies in a concentrated storm track, which roughly follows the 49th parallel. Waterton's many east-west trending mountain valleys funnel these prevailing southwest winds into larger valleys such as the Upper Waterton and Blakiston. The strong gusty winds then spill out onto the prairie.

Chinooks are another type of wind common in Waterton, especially in winter. They occur when cool air rapidly falls from mountain peak to prairie.

Waterton's summers are brief and cool with some hot spells (high 35*C/94*F). Winters are long and relatively mild, with frequent warm spells (high 10*C/50*F), often caused by chinooks. The park is one of Alberta's warmest places in the winter, despite temperatures that can drop as low as -40*C.

Waterton's climate is best summarised as mild, moist and windy, and its weather is always variable and quick to change.