The bald eagle (it's not really bald of course) is well established in Alberta and is the third-largest bird in the Canadian Rockies.

It feeds mainly on fish but it's common to see bald eagles feeding on a carcass alongside magpies, as captured by our remote cameras here.

A pair of bald eagles has nested on the American side of Upper Waterton Lake for several years and in the interest of free trade, they spend considerable time harassing the osprey for their fish on the Canadian side!

(Refresh the page to play again).

Be careful distinguishing a bald eagle from a golden eagle. Although adults have a distinctive white-feathered head and tail, juveniles are rich brown with white blotches, and can be mistaken for golden eagles. It's not until their fourth year that they gain their distinctive adult plumage. 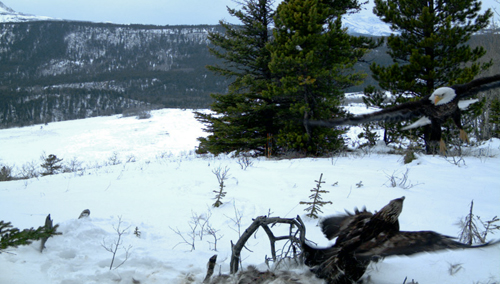