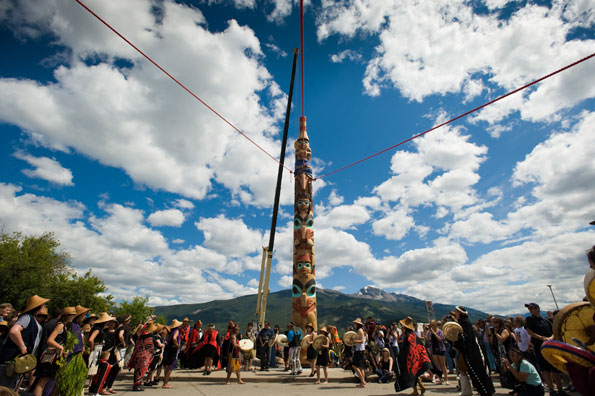 It takes a lot of people, pulling together in many different ways to raise a totem pole...

On Saturday, July 16th, 2011 as part of Parks Day and Parks Canada Centennial Celebrations, Jasper National Park along with many Indigenous and non-Indigenous partners pulled together to raise the Two Brothers Totem Pole in Jasper. 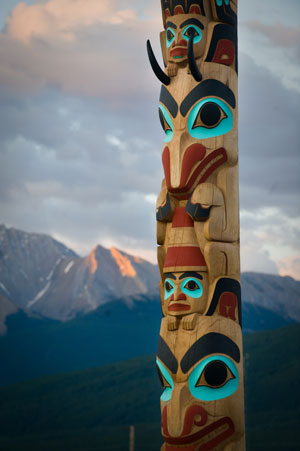 It was beautiful, moving, inspirational and historic celebration- a day that brought together more than 15 different regional Indigenous communities in a joyful celebration of their history and culture.

The Honourable Rob Merrifield, MP for Yellowhead and Parks Canada CEO Alan Latourelle joined in the celebrations and helped pull on the ropes to help raise the totem pole.

The finished totem pole is approximately 13.7 metres tall and is painted in traditional Haida colours of red, black and blue.

The book, illustrated by carvers Jaalen and Gwaai Edenshaw, tells the Haida story behind the Two Brothers Totem Pole: a story of a journey long ago from the west coast islands of Haida Gwaii to the Rocky Mountains and of an unusual connection between two very different places. The trilingual book was published in Haida, English and French.

The traditional knowledge and experience that has been integrated in the carving of the new Haida totem pole represents the timeless values that will help present and future generations of Canadians to connect with national parks, national historic sites and national marine conservation areas.

After standing in Jasper for almost 100 years, the Raven Totem Pole was taken down and repatriated to Haida Gwaii, in 2011 a new pole, the Two Brothers pole was erected in Jasper to replace the Raven Pole. This film outlines the story of the pole and its significance in the connectivity between Native peoples and this land that is now a National Park.

Voice: This story is about two brothers that would paddle up and down the coast

CU shot of Haida Elder smiling at the camera
These two brothers, would always look up at the mountains and wonder what was beyond them.

CU shot of Haida Elder in traditional hat, followed by a CU of an Aboriginal youth in full regalia, a CU of an Alexis Nakota Sioux Elder, a CU of a Haida elder, a CU of a young Haida woman, an ECU of a Cree elder&rsquo;s eyes and head dress, and a CU of a very old Alexis woman.

So on one of their journeys they decided to hike in. They walked over the mountains and after that they walked for many days and the one brother said he wanted to stay. so they parted and many many years went by, and the brother on Haida Gwaai

got to missing his brother a great deal

LS of Jaalen Edenshaw working on the Raven Totem pole lying on his back, followed by CU of wood chips falling to the ground

so before he got to old to make the journey he traveled back to&hellip;

the place where he had last seen his brother, and when he got there, there was a dwelling there and he hollered in the door (HAIDA LANGUAGE)

MS of Gwaii Edenshaw chiseling at the Raven Totem Pole making last minute adjustments, followed by a CU of his chisel
and someone answered back (HAIDA LANGUAGE) So the brother had said, "is anyone here"

and someone answered him "yes, come in" in the Haida language, and it turns out that that was his neice.

MS of Gwaii Edenshaw painting the Totem Pole in a beautiful sky blue, CU of his brush, CU of a pair of hands hammering a copper cap on to the Totem Pole and another CU of Gwaii paiting

That was his brother's daughter, and that was her uncle, so she told her uncle that his brother had passed on, journeyed on to... The other place and...

ECU of the mouth of Haida Storyteller

She was what was left.

Long moving shot of the details of the Totem Pole on its side, as the camera moves past

Me and my brother, worked on designing this pole together. It's a story pole, our grandmother Gwaaganad - Diane Brown &ndash;

LS of Haida Women bless the Totem Pole with fern boughs, CU of Haida woman&rsquo;s face, and MS of young Haida girl blowing eagle feathers on to the Pole

that I've heard, that even comes close to telling about this area.

Moving high angle shot of a hand being run along the length of the Totem Pole, CU of hands playing drums

You know, we're a sea-faring people, but those brothers in that story decided to check out what was in land.

High angle LS of parade procession being led by Aboriginal Elders, Parks Canada executives and the local Member of Parliament makes its way down the Jasper main street, MS of Haida woman singing during the procession, MS of the procession as it gets closer to the camera

And that story itself really tells of a connectivity between our land and this place far, far away and completely alien to what we know.

(Traditional Haida singing and drumming with no voices)

Over the shoulder shot moving backwards down the line of people pulling the Totem Pole up, MS group shot of Alan Latourelle (CEO of Parks Canada) Rob Merrifield (Local Member of Parliament) and a Haida Elder pulling the rope followed by a CU of their hands pulling the rope

Tighten up on this side.

ECU of the bottom of the Totem Pole sliding in to position, LS of Totem Pole standing in its position

It was powerful, it had a lot of energy and I think... something happened here.

CU of Francis Alexis talking about the Totem Pole Raising

I hope it continues, it was a good thing.

MS of very young Haida boy playing a drum under the Pole, Over the shoulder shot of Cree singers and drummers facing the Haida and their pole, singing and playing

It was really sad for me to see the old totem pole leave town, it's always been something that I personally loved, so to see it go was quite sad

CU of hand rubbing the skin of a drum, CU of young Aboriginal boy&rsquo;s eyes partially obscured by a drum in the foreground, CU of A boriginal elder in regalia moving rhythmically, LS of Haida dancers and drummers under the Totem Pole with the rope used to raise it in the foreground

to be a part of this experience today and happy that this totem pole will stand here for a long time to come.

ECU of Sue Cesco&rsquo;s eyes as she addresses the camera

Hi! Sue Cesco, and I live in Jasper

CU of Francis Alexis introducing himself to the camera

My name is Francis Alexis

CU of Gwaai Edenshaw introducing himself

CU of Jaalen Edenshaw introducing himself

My name is Jaalen Edenshaw, My Haida name is Gandalgyagan

CU of Joyce Alexis introducing herself

My name is Joyce Alexis

ECU of Rolly Williams introducing himself

My name is Rolly Williams

CU of Diane Brown introducing herself
(in Haida) my name is Diane Brown, my Haida name is Gwaaganad