To ensure long term land use certainty for the management of ski areas in the mountain national parks, Parks Canada developed the Ski Area Management Guidelines (2006). This land use planning framework: 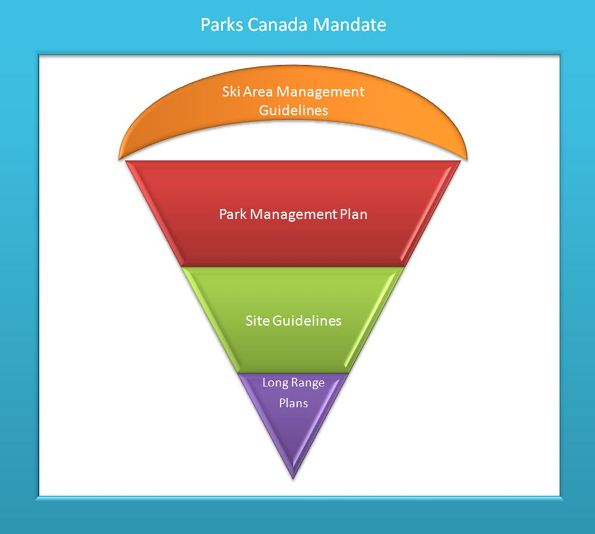 Required for all mountain national park ski areas, Site Guidelines are intended to:

Once approved, the Site Guidelines provide ongoing policy direction for any decisions and provide the guide rails for the development of Long Range Plans.

In August 2011, the Parks Canada CEO approved the Mount Norquay Ski Area Site Guidelines for Development and Use.

The second step in the management and planning process for national park ski areas is development of a Long Range Plan. A Long Range Plan is intended to outline the development and operation of the ski area for all seasons for a period of five to 15 years. It includes an environmental management system and best management practices.

Public consultation on a draft Long Range Plan is required. For the Mount Norquay ski area, these public consultations were held from November 29, 2012 to January 4, 2013. During the consultation program, comments were received from a variety of sources including the open house, on-line comment forms, paper comment forms available at various businesses and the ski hill, individual letters to Parks Canada, and e-mail.

All comments received through the public consultation program were documented, read and analyzed by Parks Canada specialists.

What We Heard – Your Comments

Public interest in the draft Long Range Plan was strong, with comments coming in from local residents as well as individuals from across the country. By the end of the consultation period, Parks Canada processed over 1,450 public comments. Below is a summary of the major topics identified in these comments.

Environmental Impacts – What We Heard

Many people felt passionately about potential impacts on the environment. Respondents commented on both sides of the issue.

Some respondents felt that the lease reduction and reconfiguration would provide a net benefit to the environment. They saw the proposal as an example of good environmental stewardship and sustainable business practices by an organization operating in a national park setting. Others felt that the new water management strategy, which includes improved snow making, would lessen the environmental and visual impacts.

Other respondents felt that the draft plan overestimated the net environmental benefit of reconfiguring the lease. Many expressed the belief that any increased summer use in this area would be to the detriment of existing flora and fauna for whom this area and season is vitally important, especially the grizzly bear. Others felt that activities as described in the draft Long Range Plan would be better left to a less environmentally sensitive area. Concerns were also expressed regarding potential risk to public safety with the increased interaction between humans and wildlife. In addition, comments were made about the efficacy of the proposed mitigations and what would be required for monitoring the ecological health of the area.

Visitor Experience – What We Heard

A number of respondents felt that the proposal would help to enhance or revitalize the current visitor experience offer in the park, which in turn would attract more visitors to the area. Specifically, the proposal would help expand access to higher elevation experiences for individuals who otherwise may not have the opportunity. Still others felt that any increase of outdoor activities promoted a healthier, more active lifestyle to an increasingly sedentary population. Some respondents indicated that there should be more activities and opportunities made available than outlined in the proposal.

With respect to the proposal on glading and run widening, certain individuals felt that these changes would enhance public safety through the creation of safer ski terrain.

Others commented that having new opportunities, such as via ferrata, was not consistent with, or authentic to, the Parks Canada “brand” and not what most visitors were looking for when coming to a national park. Others expressed concerns that changes could lead to an increased risk to public safety as relatively inexperienced visitors were going into potentially dangerous situations without the proper training or tools. In addition, certain people felt that the educational opportunities proposed were too weak to meet the Parks Canada mandated requirements.

Several respondents viewed the Long Range Plan as part of a much larger policy discussion. Some argued the Agency’s primary role is to protect the ecological integrity of the park and felt that there was already too much development in the park. They believe that development may be coming at the expense of wildlife habitat. Overall concerns were also raised about the durability of Parks Canada agreements - certain respondents felt that the issue of ski area development and summer use had already been dealt with in Mount Norquay’s Ski Area 1989 Long Range Plan.

Others commented that it was in Parks Canada’s best interest to ensure long-term viability of the Mount Norquay Ski Area, given its history and role in the recreational heritage of Banff, and as an affordable, family-friendly ski hill. Others felt that it was only fair to allow summer use at Mount Norquay as it is allowed at the other two ski areas in Banff National Park. For a number of people, the direction in the draft Long Range Plan was consistent with the Ski Area Management Guidelines and Parks Canada’s requirements, and therefore should be allowed.

Consultation Process – What We Heard

Transportation – What We Heard

The draft Mount Norquay Long Range Plan proposes implementing or improving transit services for winter and summer use. For some, this was a sound proposal and would help alleviate additional pressures on the traffic and wildlife. In addition to this service, there was the suggestion of moving forward with a gondola from the Banff townsite to Mount Norquay as another method of mitigating traffic disturbance.

Other respondents felt that the transportation proposal would be hard to implement and the public uptake may be limited, not meeting the five percent reduction target. They also indicated that there would be greater traffic and parking congestion on the site.

After processing and reviewing the comments received from the public consultation period, Parks Canada worked with the Mount Norquay Ski Area to improve or clarify the draft Long Range Plan to ensure it met the requirements as identified in the Ski Area Management Guidelines and approved Site Guidelines. Specific areas to note include:

Environmental Impacts : Parks Canada is requiring the Mount Norquay Ski Area to clarify the magnitude and extent (footprint) of their summer use program. Summer visitation to the ski area will be contained within a fenced area to help minimize impacts to the flora and fauna, as well as limit the opportunity for contact with wildlife, especially grizzly bears.

Visitor Experience : Concerns about public safety surrounding via ferrata will be addressed by ensuring that the route is installed by a qualified via ferrata technician. As well, the via ferrata experience will managed and guided only by ACMG trained and certified guides to ensure the highest level of professionalism and safety. From the educational perspective, Parks Canada has requested more detailed interpretive/educational plans for the via ferrata and lodge area/tea house elements of the Long Range Plan.

Policy : Parks Canada will allow via ferrata and summer use at the Mount Norquay Ski Area as was approved in the Mount Norquay Ski Area Site Guidelines for Development and Use. However, use and development of these proposals will have to meet the parameters and conditions as set out in the Site Guidelines. Parks Canada is also requiring a detailed monitoring plan for summer use at the ski area to ensure that parameters and conditions for use are maintained. This plan will include monitoring of traffic on the Norquay road, and of the vegetation and habitat improvements outlined in the Long Range Plan.

Consultation Process : Accountability for analyzing public input and taking this into consideration in decision-making rests with Parks Canada. Public comments were documented, read and analyzed in-house by Parks Canada staff.