Wildlife Crossing Structures and Research | Construction: Past, Present and Future 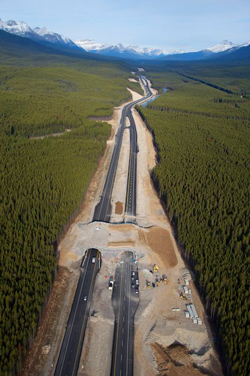 The Trans-Canada Highway (TCH) in Banff National Park was built in the early 1950s as a scenic, low volume, two-lane highway. Stretching from Newfoundland to Vancouver Island, the TCH is 7821 kilometres in length, making it the longest paved highway in the world. It has since developed into a major commercial highway and an important trade corridor connecting eastern and western Canada.

The Trans-Canada Highway presents Parks Canada with several interesting ecological challenges. As the primary access road in Banff National Park, which is part of the Canadian Rocky Mountain Parks UNESCO World Heritage Site, the highway bisects and fragments the Bow Valley and its ecosystems by acting as a barrier for wildlife to access food, shelter and mates.

In addition to tackling the highway’s ecological challenges, Parks Canada has also been working to minimize risks to motorist safety by reducing wildlife-vehicle collisions.