Wildflowers of the Rocky Mountains 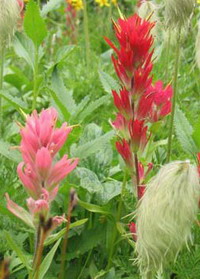 Wildflowers, with their variety of colours, shapes, and scents, add immensely to the Banff National Park experience. Whether identifying, photographing or simply appreciating them, wildflowers brighten a visit to this mountain landscape.

The three major vegetation zones in the park support a variety of wildflower species. Here are some of the characteristic wildflowers of each zone, with a few suggestions for good places to find them. 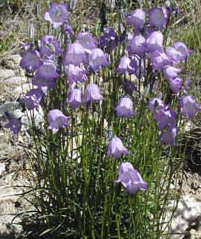 Good spots to find these wildflowers include the north shore of Johnson Lake, open grassy areas such as below the falls on Cascade Mountain or along the Bow Valley Parkway, and in the Saskatchewan River Crossing area in the northern part of the park.

The subalpine zone -- the broad band above the montane zone up to treeline -- receives more precipitation than the montane and is predonminantly coniferous trees. On the shady forest floor you will come across such wildflowers as Bunchberry, Twinflower, Bronze Bells, Single Delight (One-flowered Wintergreen), Labrador Tea, and White-flowered Rhododendron. Tall colourful flowers, such as Sitka Valerian, Fleabanes and Triangular-leaved ragworts grace treeline glades.

These species can be seen on the way to Stewart Canyon, up the Bourgeau Lake trail, along the gentle walk to the Lower Falls of Johnston Canyon, and on many of the trails around Lake Louise. 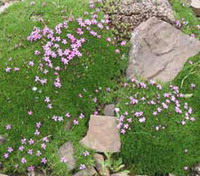 In the land of rock and snow, above the last trees, there are found some hardy wildflowers. Among them are Moss Campion, Purple Saxifrage, Glacier Lily, Alpine Speedwell, Alpine Forget-Me-Not, Western Anemone, White Mountain Avens, Mountain Sorrel, Silky Phacelia, and three different heathers.

One of the classic areas in Banff National Park to witness carpets of these species covering the landscape is Sunshine Meadows. You can also surround yourself in brilliant displays at Bow Summit and on Parker Ridge.

Although there are blossoms out in the Canadian Rockies from as early as late March through until mid-September, the peak flowering time in Banff National Park at all elevations is from mid-July to mid-August. The flowering season of a particular species is affected by factors such as elevation, slope orientation, wind, soil, and precipitation (including in the winter).

So that future visitors can enjoy wildflowers, and so that the flowers themselves continue to thrive, picking is not permitted. You can enjoy the brilliant floral displays of Banff National Park in their wild setting through photography, identification, or simply appreciation, and leave them intact so that others also have the same pleasurable experience.

Here are a few suggestions of books to help you further enjoy Banff wildflowers: