Caribou have lived in the central Canadian Rocky Mountains since the last ice age. But, because caribou’s preferred habitat is located far from most park facilities, sightings were always a rare treat for visitors to Banff National Park.

Who’s who of caribou

When we think of caribou, we often envision vast herds of animals migrating great distances across a seemingly barren northern landscape. These are the barren-ground caribou of the Arctic.

Peary caribou are only found in Canada’s arctic islands. 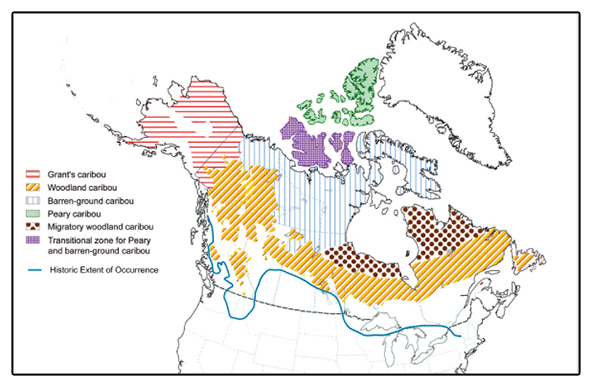 Map of caribou range in Canada © Hinterland Who's Who (www.hww.ca). 2010. Used with permission.

Caribou and reindeer belong to the same species, Rangifer tarandus. They once ranged across the Arctic, throughout the forested regions of Canada, and into parts of the northern United States.

Several caribou populations are in trouble and are now listed as Species at Risk.

Caribou are usually found in and near the alpine. In winter, caribou rely on lichens that grow in areas rarely used by deer, elk and moose. In doing so, they separate themselves from other large prey species and the predators they attract.

Woodland caribou also travel in small groups for most of the year, improving their chances of eluding the search patterns of predators like wolves. This evolved behaviour helps them survive in spite of a lower reproductive rate than other members of the deer family. 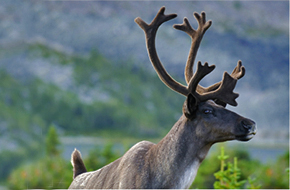 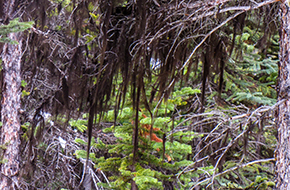 When caribou run... they click! The sound comes from tendons slipping over bones in their feet. A trotting herd of caribou sounds like a horde of tourists with cameras.

Part algae, part fungus... lichens grow on the ground and in trees. They make up 60-80% of the winter diet of Alberta’s Woodland caribou, and roughly 30% of their summer diet. Although lichens are a high-energy, highly digestible snack, they are not a protein powerhouse. When spring arrives, caribou are eager to switch to nitrogen-rich green vegetation.

The name caribou... may be a corruption of the Mi’kmaq name for the animal, xalibu, which means “the one who paws”. 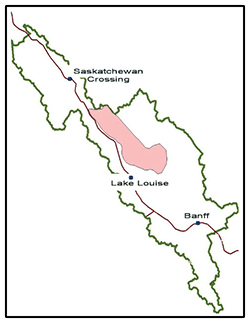 The earliest written record of caribou in Banff National Park dates back to 1902, when guide Jimmy Simpson tracked two animals in the Siffleur Valley.

Restoring a self-sustaining herd requires human intervention. Parks Canada is looking at ways to help keep caribou on the land in Alberta.