Banff National Park is divided into units based on vegetation, landforms and soil. This system of land classification is used to identify and inventory similar regions within the park in order to better manage park ecosystems. The park is classified into ecoregions, which are further divided into ecosections and ecosites. There are three ecoregions in the park: montane, subalpine, and alpine. 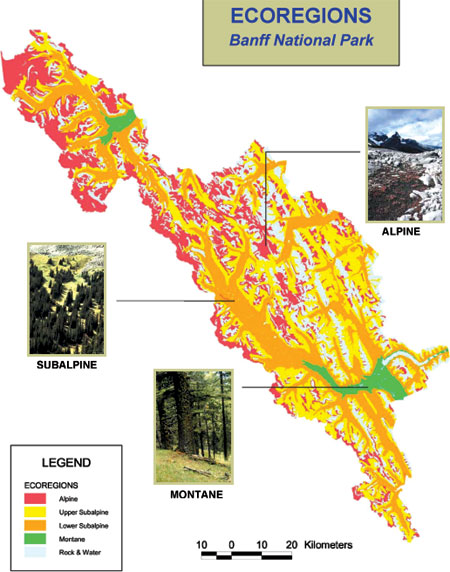 Map of the ecoregions of Banff National Park
© Parks Canada

The montane zone is the smallest ecoregion in Banff National Park making up only 3% of the total area of the park. It occurs at lower elevations between 1350 metres and 1500 metres on north-facing slopes, rising to 1650 metres on steep south-facing slopes. The vegetation of the montane ecoregion is characterized by forests of Douglas-fir, trembling aspen and lodgepole pine with patches of grasslands on dry sites. White spruce, balsam poplar and shrub meadows occur on wetter sites.

Vegetation is actively managed in the montane ecoregion using prescribed burning to maintain the open forests and grasslands that occur in this ecoregion. Ungulate populations, particularly elk, are kept under control to prevent overbrowsing and damage to aspen stands and shrubs.

The upper subalpine region makes up 26% of the park area. It is primarily forested by Englemann spruce and subalpine fir, interspersed with dwarf-shrub meadows, and avalanche path communities. The boundary between upper and lower subalpine regions is at about 2000 metres. Prescribed burning is used to maintain and restore vegetation in this ecosystem.

The alpine ecoregion occurs above the treeline and covers 44% of the park. Of this area, about 6% is covered by alpine meadows and shrubs. The remaining thirty-eight percent of the park is unvegetated rock, talus, moraines, snow, ice and water. There is no active management of vegetation in the alpine ecoregion.